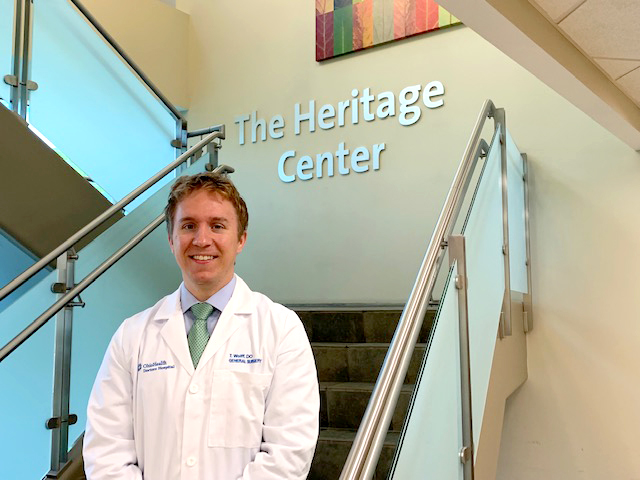 Dr. Tim Wolff ’09 is now beginning the fourth year of his surgical residency at Doctors Hospital in Columbus, Ohio. The American Osteopathic Foundation and the American College of Osteopathic Surgeons recently named him the 2019 Outstanding Resident of the Year in Surgery “in recognition of his exemplary work, demonstrated leadership, steadfast clinical performance, and unwavering commitment to the osteopathic profession,” according to the organization’s announcement.

It surprised Wolff, who was nominated for the award back in the spring and then put it off his radar. When he heard he was chosen, he was grateful, but humbled. “It was certainly great news to receive,” he said. “I still feel a little disbelief that out of all the residents in the country, I was selected as among the most outstanding.”

Originally from Woodbridge, Virginia, Wolff came to Lynchburg College in part because of the chance to be on a rescue squad while going to school. But it also checked off another important quality based on his parent’s advice — a place he could see himself settling in.

“I could easily see myself becoming a part of the community,” he said. “It was not only the opportunities that Lynchburg presented, but it felt like a place I could call home. And it was.”

Wolff served on the campus EMS squad as well as the local Lynchburg Lifesaving Crew. His academics also paved the way for medical school, thanks to professors in the chemistry department and in Westover Honors.

“The professors knew me personally, and I got to know them,” he said. “These personal relationships allow for … engaging instruction, honest dialogue, and dynamic learning.  I always felt that my professors had a genuine interest in of each of their students’ educations, and this helped challenge each student to his/her potential.

“This wasn’t just true for chemistry or the sciences, but all across campus.”

After medical school at the West Virginia School of Osteopathic Medicine, Wolff completed his first two years of postgraduate training at Doctors Hospital. He then spent this past year as the trauma research fellow at Grant Medical Center in downtown Columbus. He tapped into his Westover Honors roots and focused on about 15 research projects to help improve the medical profession.

One study focused on REBOA, a trauma surgery technique which uses a vascular balloon to control life-threatening bleeding and improve blood flow to the patient’s brain and heart. It’s much less invasive than the traditional method, which is to open the patient’s chest to clamp the aorta, Wolff said.

He tracked data on the performance of REBOA at Grant and the results included several lessons that other hospitals could find beneficial when implementing the device.

In another project, Wolff worked with surgeons at seven different hospitals across the U.S. to track their fatigue levels, work schedules, and their risk of burnout. “We found out that being on call more … isn’t an independent risk factor for burnout,” he said. “Burnout itself is more of a complex issue than fewer on-call shifts or having fewer on-call hours.”

Wolff and his colleagues will present that research in September at the annual meeting of the American Association for the Surgery of Trauma.

“I think it’s important to tailor that pathway to your own interests and characteristics that help you stand out as a person and one day as a medical professional.”

Going into the next year of his clinical residency, Wolff had some advice for today’s college students who are thinking about medical school — “have the courage and perseverance to find your own way.”

“Once I got to medical school, I was very surprised by how different everyone’s backgrounds were,” he said. “Everyone had a different story about how they arrived at medical school. That’s something to remember when you’re going through this path. There’s no strictly defined, single way to do it.”

Of course, he said, there are application requirements that medical student hopefuls have to meet. But those can be met while the person pursues less traditional pre-med majors, he said. “I think it’s important to tailor that pathway to your own interests and characteristics that help you stand out as a person and one day as a medical professional.”