Joyce Darrell ’84 has rescued dogs from around the world for nearly 20 years.

She and her husband, Michael Dickerson, operate Pets with Disabilities, a nonprofit that provides care for pets and matches them with forever homes. They live in Calvert County, Maryland, but they have traveled throughout the United States and as far as Japan and Egypt to pick up dogs who need love, attention, and a new home.

“Dogs have no boundaries, no control over all of it,” Darrell said. “I want to be there to help when I can.” 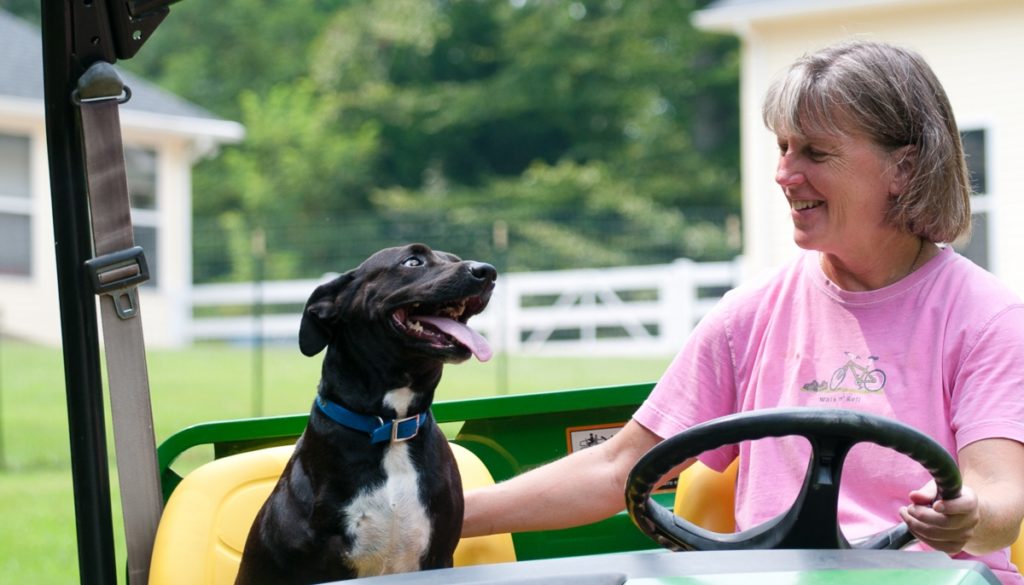 Darrell majored in American Studies at Lynchburg College and also played on the field hockey team, which she described as a “crazy family” that remains tight even today. When she graduated, one of her English professors helped her get a job in Washington, D.C.

She was running a fitness center in Maryland when she and Dickerson adopted Duke, an active, playful shepherd puppy. Life threw them for a loop when Duke’s spinal cord was severed in an accident as he played with another dog. Veterinarians suggested that they put Duke down, but they refused to let that be an option.

“When we adopted Duke and took him home, it was a commitment thru sickness and health,” Darrell wrote on her website, petswithdisabilities.org. “He was part of our family.”

They nursed Duke back to health and got him a dog wheelchair. But a few months later, they learned of a dog that had been in a New York shelter for five years who also needed a wheelchair. They realized that there could be many more pets in need of help.

In 2000, they opened Pets with Disabilities. Darrell left her work at the fitness center behind to focus full-time on saving pets and placing them in the perfect homes. They work with veterinarians to provide care that prepares the dog to be adopted out, and people apply for the opportunity to take one in.

The most challenging part of the job is simply ignoring the naysayers who think a dog with disabilities is too much trouble, Darrell said. But she stays focused on her goal.

She’s had some publicity along the way. She was featured on “The Today Show” in 2009 after she rescued some dogs from Russia.

More recently, the Calvert County Commissioners issued a proclamation honoring Pets with Disabilities and the organization was featured in a county magazine.

Darrell gives credit to the dog who inspired her work. “We thank Duke for entering our lives and making us better people,” she wrote on her website. “This certainly has been a labor of love.”