The 2019 “Night at the Movies” concert will transport audiences into “The Wonderful World of Walt” — Walt Disney, that is.

This year, the University of Lynchburg’s wind symphony, orchestra, and choral groups, will perform music from Disney favorites The Lion King, Beauty and the Beast, Mary Poppins, The Hunchback of Notre Dame, Miracle, and other films.

“We’ve hit all the biggies,” Dr. Oeida Hatcher, associate dean of the School of Visual and Performing Arts, said. “It’s a movie concert, which means we’re in the dark and you guys are sitting there, watching movies, hearing live movies. It’s extremely different than other concerts.” 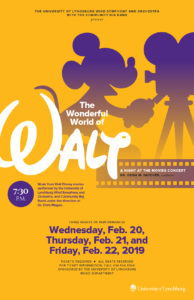 Most pieces in the concert were arranged by Dr. Chris Sharp, assistant professor of music at Lynchburg. Dr. Sharp was uniquely prepared for this task, having worked for The Walt Disney Company for more than a decade.

“Prior to my college-teaching years, I was a musician and music arranger/orchestrator for Walt Disney World,” Dr. Sharp said. “I worked there for over a 13-year period and still have professional connections with the Orlando music community.

“While at Disney, I wrote over 300 compositions for various purposes, including but not limited to live music groups, Disney parks worldwide, many recording sessions, convention shows, and sometimes fireworks music, parade music, and TV broadcasts.”

Dr. Sharp also was a bandleader and trombonist at the Magic Kingdom, EPCOT Center, and Disney/Hollywood Studios.

When Dr. Hatcher decided this year’s concert would be an all-Disney one, she knew where to turn. “I just went to Dr. Sharp and said, ‘I want Disney arrangements,’ and he said, ‘I wrote a lot back in the day and can arrange some more for you.’

“With the exception of two jazz pieces and ‘Miracle,’ everything we’re doing is from the pen of Dr. Sharp. Most universities and colleges don’t have a resident composer/arranger on their staff or faculty. We’re really blessed.”

By “Miracle,” Dr. Hatcher is referring to “Suite from Miracle,” from the 2004 Disney film that tells the story of the “miracle on ice” — when the 1980 U.S. Olympic men’s hockey team defeated powerhouse Russia in the medal round.

Dr. Hatcher obtained the studio version of the piece from its composer, Mark Isham. “We got that from the composer himself. It’s unpublished, so it’s cool,” she said. “It was used in the movie, but never published for people to perform. We contacted the composer and asked him if he would allow us to play his music and he said, ‘Absolutely.’”

For the production, Dr. Hatcher also put out an “all call” to students, faculty, and staff for Disney memorabilia. “You would not believe the stuff we got,” she said. “It will be like a Disney museum when you enter the hall.”

Dr. Hatcher said students have been begging her for years to do a Disney-themed concert and she finally relented. “I gave in to pressure,” she admitted. “It was the year. One of my students said, ‘When we first came here, you did Harry Potter. We came in with Harry Potter and we’re leaving with Disney. Life is good.’”

Dr. Sharp is excited for opening night as well. “Oeida goes way out of her way to produce these musical extravaganzas she has come to be known for,” he said. “I know of no other school who routinely puts together such elaborate, multimedia presentations, and this is my fourth college job. By all rights, we should be charging top dollar for these shows.

“This community is blessed to have these concerts coming to them several times each school year, for free!”