The University of Lynchburg will honor longtime education professor Dr. Edward A. Polloway with a new name on the campus’s education building during Homecoming.

Thompson Hall will be renamed Thompson-Polloway Hall in a ceremony at 10 a.m. on Saturday, October 20. The event is open to the public and all alumni, especially education alumni, are invited. Due to Homecoming activities on campus that day, guests are asked to drive to the ceremony via College Street.

Dr. Polloway is a professor emeritus who also has served as vice president for community advancement, dean of graduate studies, and dean of the School of Education. He is widely credited with leading unprecedented growth in graduate programs. He retired from his administrative roles in 2015 and retired as the Rosel H. Schewel Distinguished Professor in Education and Human Development in 2018. 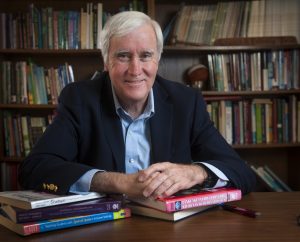 Dr. Polloway received his master’s and doctoral degrees from the University of Virginia and his baccalaureate degree from Dickinson College in Pennsylvania. His professional interests are related to policy issues in the fields of intellectual disabilities and learning disabilities and curriculum and methodological issues relative to special education in general.

He has served in several organizations dedicated to improving public policy and educational opportunities for people with disabilities. He is the author/co-author of 24 books and more than 100 journal articles in the field of special education, with primary focus in the areas of learning disabilities and intellectual disability.

Thompson Hall was built in 1987 and in 2009 it was named in honor of Dr. M. Weldon Thompson, who served as a professor of education at Lynchburg College for many years. Dr. Thompson earned a bachelor’s degree in mathematics from the College of William and Mary, a master’s degree in public administration from George Washington University, and a Doctor of Education from Stanford University. After serving in World War II, he joined the Lynchburg College faculty in 1947. During his tenure, he taught courses in education and Latin American studies. In 1966, he became the first dean of graduate studies. He also served as commanding officer of Lynchburg’s Naval Reserve Surface Division. He retired from Lynchburg College in 1974.