Dr. Kenneth R. Garren will retire as president of the University of Lynchburg in 2020, the University announced this morning. At that point, he will have led the institution for 19 years. 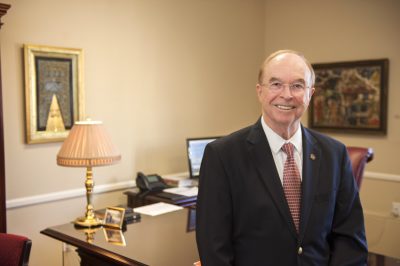 Dr. Garren informed Nathaniel Marshall, chair of the University of Lynchburg Board of Trustees, earlier this month that he would not seek to extend his contract past its current end date of June 30, 2020. “Mr. Marshall and I have been working recently to form a Transition Team that will propel this institution into the next decade and beyond,” Dr. Garren said in an email to the campus community this morning.

The transition team consists of faculty, staff, students, trustees, alumni, Central Virginia community members, and Parents Council members. The team met Friday morning and discussed extending the Vision 2020 Strategic Plan, the future of fundraising initiatives, and the presidential search. Going forward, the team will coordinate with the campus community and the Board of Trustees to make future plans, including identifying the desired characteristics of the next University of Lynchburg President.

“It is difficult to imagine an aspect of our identity as an institution that has not been positively impacted by Dr. Garren’s leadership,” said Marshall. “Arts, athletics, the student experience, our inclusive culture, and our campus facilities have moved forward thanks to him. He will be missed, upon his retirement, but we hope the next president of the University of Lynchburg will build off of the momentum Dr. Garren has helped us build.”

Dr. Garren became president of Lynchburg College in 2001 after a career that included work at NASA and teaching mathematics and serving as dean at Roanoke College, his alma mater. At Lynchburg, he brought a sense of pride in the College’s excellence and optimism for its future development. Under his direction, Lynchburg College grew its graduate programs, including doctoral degrees in physical therapy, educational leadership, and medical science, which now have hundreds of alumni among them.

The institution also invested in facilities, such as Schewel Hall, the Drysdale Student Center, and the education building and Belk Observatory at the Claytor Nature Center. By developing new townhomes on campus and purchasing homes in the neighborhood surrounding the campus, the College became more residential. The student body has become more diverse, in part thanks to Dr. Garren’s long-recognized focus on diversity and inclusion.

The athletics program has thrived with his enthusiasm and support, which included his attendance at many home competitions as well as support for projects such as upgrades to the Jack Toms Track and Shellenberger Field.

The growth in population and academic programs cemented the institution’s identity as a university, which is reflected in the recent adoption of the name University of Lynchburg.

“It has been my honor to serve as president of this beloved institution for the past 17 years,” Dr. Garren said. “When I became president, I saw so much to be proud of in our academic program, our student-centered approach, our alumni, and our faculty and staff. I also saw great potential for the future, and we have achieved much of that potential.

“My wife, Sheila, and I have grown to love this institution and the people who work and study here every day. The University of Lynchburg truly is a college that changes lives. It has changed mine, and it will impact people for years to come.”