/ News / Criminology major learns what it’s like to be ‘on the job’ with Raleigh P.D.

Kyle Brumbaum ’19, a criminology major at the University of Lynchburg, spent much of his summer break in North Carolina doing an internship with the Raleigh Police Department. During the two-month internship, Brumbaum explored various areas of law enforcement, from patrol to narcotics.

He spent about a month doing ride alongs with patrol officers in some of Raleigh’s high-crime areas. “I mainly worked in the Southeast district, which is notoriously known for drugs, murders, etc.,” he said. “I also worked in the Northeast district, which is known for burglary and larceny. I also had the opportunity to work with robbery detectives and general … detectives [who] mainly focus on car theft, breaking and entering, trespassing, simple assaults, and credit card theft.”

During the internship, Brumbaum got to talk with investigators who work in narcotics, vice, human trafficking, and gang enforcement, and he spent time with the department’s special operations unit. He said his favorite part of that was working with the K9 officers. “I got to see them doing tracking exercises and see how quickly it takes the dogs to pick up and find the object that they were supposed to find,” he said. 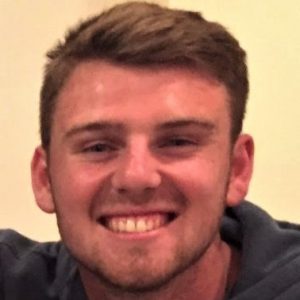 Brumbaum also did stints in records, the courts, and traffic enforcement. “I actually got to help run radar and run some license plates,” he said, adding that one traffic stop had an unexpected result. “We pulled over a car because it had sketchy tags and there were two people in the car.

“We asked for both the driver’s and passenger’s ID but the passenger didn’t have their ID on them, so we asked for their name. The reason they do that is just to make sure they don’t have a suspended license or have any warrants out for them. So, we ran their names and there happened to be a warrant on the passenger. We arrested the passenger.”

On the way to the jail, the prisoner confessed that he’d given them a false name. He then gave them his real name. “So, we ran their real name and it turned out that there was a warrant out for [him],” Brumbaum said. “So, it worked out in the end.”

Asked what he learned this summer, Brumbaum said, “There is a lot of paperwork that officers and detectives have to do.”

He added that the experience made him more sure of the career path he’ll pursue after graduation next year. “This internship definitely motivated me to work in law enforcement after I graduate,” he said. “After being a police officer for a few years, I really want to work in federal law enforcement, either ATF, DEA, or the FBI.”