This past winter, when Beau Wright was looking for someone to manage his campaign for Lynchburg City Council, he spoke about it with someone who worked on Virginia Gov. Ralph Northam’s winning 2017 campaign. Wright said they gave him one name: Carter Elliott. “So, I called Carter and we met for lunch,” he said.

Elliott, a rising senior at University of Lynchburg and founder and president of the College Democrats, had lunch with Wright. The candidate asked him to be his campaign manager and he accepted the job. “Beau [said] he wanted to run a campaign like Lynchburg has never seen before, and in order to do this, he said he needed a young, energetic, and experienced person to fill the role,” Elliott said.

Elliott has been involved in politics since middle school. He was instrumental in bringing Virginia Senator Tim Kaine to campus this past fall. He’s volunteering with Kaine’s re-election campaign and is campaigning for a 5th District candidate for the Virginia House of Delegates. Recently, he also won the University of Lynchburg Service Award for doing 1,000 hours of service work over the past academic year. All of that, along with pursuing a double major in history and political science. 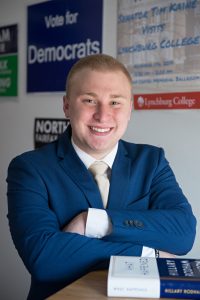 It’s no wonder that when Elliott was inducted into a Boy Scouts national honor society several years ago, he was given the ceremonial name “Tatchen Wulamallsin Ktemaque,” which translates from the Algonquin as “Little Happy Beaver.”

During Wright’s campaign, Elliott made hundreds of phone calls and knocked on hundreds of doors. He helped Wright prepare for debates, coordinated volunteers, distributed yard signs, and planned the election kickoff and post-election victory parties. According to Elliott, the campaign contacted more than 4,000 people and raised more money than any of the other candidates.

There also were some late nights, as evidenced by this 2 a.m. Facebook post: “This is how much I love my job,” Elliott wrote. “I just left the post office at 1 a.m. so we can reach more voters before Election Day. 5 days till E-Day!”

Asked about what Elliott brought to his campaign, Wright said, “Certainly, hard work. He’s a very hard worker. And, obviously, a real enthusiasm. Carter is well connected and he’s savvy beyond his years. I can’t imagine being able to perform at the same level when I was 20 or 21 years old. He’s impressed me very much in that regard.”

He added that Elliott also “has a flair for the dramatic.”

All of Elliott’s hard work paid off on May 1, when Wright claimed one of three open Lynchburg City Council seats. When the official results came out, Elliott said, “I began to tear up, with so much excitement. I looked at Beau, filled with joy, and gave him a hug.

“We said our congratulations and as the news reporters began to roll in, I stood there, speechless, in awe of what we had accomplished. He looked at me and said, ‘Let’s go, buddy.’ I then settled the crowd and eagerly introduced the newest member of the Lynchburg City Council, Councilman Beau Wright.”