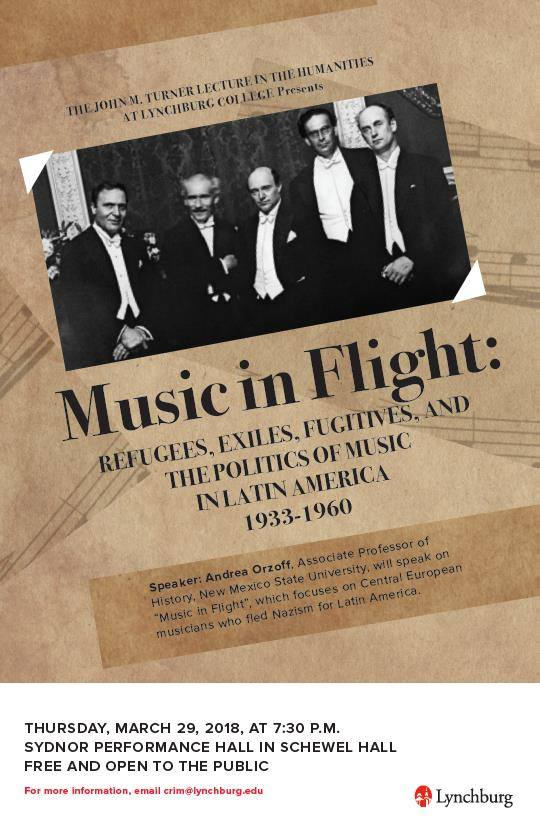 University of Lynchburg will host Dr. Andrea Orzoff for this year’s John Mills Turner Humanities Lecture titled “Music In Flight.” The lecture will focus on Dr. Orzoff’s book, Music in Flight: Exiles, Refugees, Fugitives, and the Politics of Music in Latin America, 1933-1960, which is about Central European musicians who fled Nazism for Latin America.

The lecture is free and open to the public and will be held at 7 p.m. on Thursday, March 29, in in Schewel Hall’s Sydnor Performance Hall..

“Music in Flight is about history, music, the politics of immigration, the plight of refugees, and cross-cultural communication,” said  Dr. Brian Crim, John M. Turner Distinguished Chair in the humanities department. “It also sheds light on the fact that the Holocaust was a global event in which Jews found refuge wherever they could, involving dozens of governments.”

With this lecture, Dr. Crim hopes to promote humanities across campus. “I think the topic is relevant for today because the people Dr. Orzoff is studying were wartime refugees fleeing imminent danger and certain death for a second chance in the Americas”  said. “Immigration and the treatment of refugees is a timeless issue and this historical perspective is truly enlightening.”

One of the musicians discussed in Dr. Orzoff’s book, Erich Kleiber, fled Nazi Germany in 1935 and spent the war in Latin America. Dr. Orzoff offers a lens into a largely unknown wartime cultural migration to Latin America through Kleiber’s story.

Kleiber’s story sheds light on World War II’s impact on developing countries, the legacy of the Habsburg Empire, the pressures on German-speaking refugees in the Americas, transatlantic 20th-century musical politics, and the difficulties of remigration to Europe after the war.

Dr. Orzoff is an associate professor of history at New Mexico State University. Her articles have appeared in German History, Slavic Review, the Austrian History Yearbook, and Nationalities Papers.

“I met Andrea Orzoff at a faculty seminar at the U.S. Holocaust Memorial Museum in Washington, D.C., where 20 faculty from all over the world met for a week to discuss the topic of Holocaust eyewitness testimony,” Dr. Crim said. “I was so impressed with Dr. Orzoff’s ambitious project, following these musical refugees on a harrowing journey and researching in so many languages and working in archives in several countries.”

Dr. Crim kept in touch  with many of the faculty he met in D.C.. “We all got to know each other and our research interests very well,” he said. “I immediately thought of [Dr. Orzoff] as a speaker once I was awarded the Turner Chair.”