For years, Matt O’Loughlin ’20 wanted to see a manatee. Every time he had to pick an animal for a high school research project, he picked the manatee. He studied manatees and he talked about manatees. He just never had the opportunity to see one of the large, aquatic mammals — sometimes called “sea cows” — in person.

“They’re cool, chilling in the water,” O’Loughlin, a computer science major from Charlottesville, Virginia said, adding that he’s always thought seeing one in “real life” would be a “really cool experience.”

Over spring break, O’Loughlin finally got to see a manatee during a trip to Everglades National Park with University of Lynchburg’s Outdoor Leadership Program. For four days, 10 students, led by Peter Berry, coordinator for outdoor leaderships programs, kayaked from island to island — more exactly, key to key, which is what the tiny, low-lying islands are called.

The students spent their days paddling in the warm saltwater south of Miami, past mangrove trees “standing” on spindly root-legs, and with dolphins sometimes swimming five feet from the boats. There were birds — lots of birds, Berry said — including osprey, hawks, sandpipers, and pelicans. Some in the group even saw a sea turtle coming up for a breath of air.

Each night, the students set up camp on one of the keys. They pitched their tents, built a campfire, ate dinner, played games, and enjoyed each other’s company. “It was a really good bonding trip,” Taylor Alexander ’19 MEd said. “Most of the students were undergrads and I didn’t know any of them. At night, we had our tents all set up on these little islands and the stars were just crazy. No light pollution. An infinite number of stars, which just blew my mind.”

The students also bonded through challenges, like kayaking through four-foot swells and doing without some modern-day conveniences. While they had emergency radios, there was no cell phone service. All fresh water had to be carried in and used sparingly. Meals consisted of dried foods, like granola, and dehydrated “backpacker” meals that could be reconstituted with water boiled on a camp stove.

And as for showering, what’s showering? “We basically didn’t shower for four days, which was a little brutal,” Alexander, of Mahwah, New Jersey, said, adding that the hardest part was having a limited supply of fresh water. 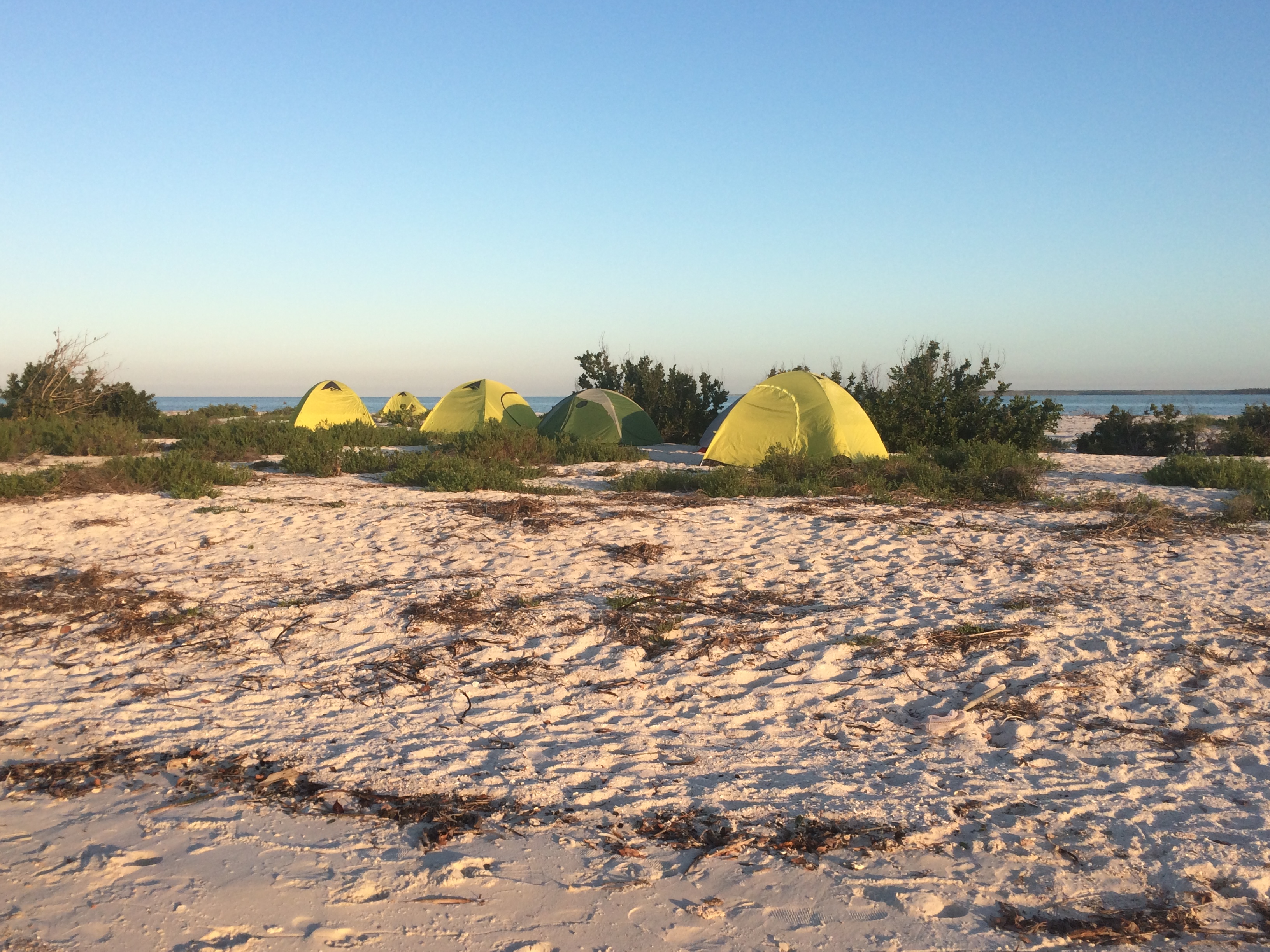 On the bright side, however, they had no problems with bugs. “I came home with maybe two bites,” Alexander said. “We were lucky. There was another group, going somewhere else, and the [park] ranger told them, ‘The mosquitoes are the size of bats, so be careful.’ We lucked out in that department.”

O’Loughlin said he found it best to face the challenging conditions head on. “This is what I’m going to be drinking and eating for four days,” he said. “No shower. You have to accept it and the whole group accepts it. You’re in it together.”

Despite that, as the days passed, thoughts of the outside world sometimes appeared like a mirage. Berry recalled hearing comments like, “I’d really love a roast beef sandwich” and “I’m craving some Wendy’s,” and said, “Ice cream was a hot topic.”

Fortunately, he’d planned for these difficult moments. “One day, we got rained on quite a bit,” he said. “We set up a shelter off one of the points, played some games, and handed out jerky and Snicker’s as a morale booster.”

‘All about experiential education’

Each morning, the students tore down camp, packed their food, water and belongings into their kayaks, and paddled off for the next key. The first and longest day, they paddled to Turtle Key, around Rabbit Key, and camped at Pavilion Key. It was 10 or 11 miles, 13 if tides and swells were a factor. Over the four days, they traveled 25 miles.

There was no requirement, however, that students had any prior experience with kayaking or camping. While O’Loughlin had sailed while living in Massachusetts, kayaking was a new thing. Alexander, who wants to go into outdoor education after she finishes her master’s degree, worked one summer as a kayak tour guide, but had never done a multi-day kayaking trip.

“You don’t need a lot of experience to be able to do this,” O’Loughlin said. “Make sure you can swim. They’ll teach you how to do [everything]. Everyone’s super friendly. Even if you don’t know how to set up a tent, it’s not an issue.”

While the trip wasn’t for academic credit, it was educational. The students learned about map reading, navigation, nutrition, rescue techniques, and the effect of tides, among other things. “I’m all about experiential education,” Berry said.

Marissa Bucklew ’18, a human resource management major from Lynchburg, said she and the other students “learned things we may not have anticipated. From understanding our new physical limits to meal rationing, it was quite a new experience for most.”

For most of the students, it was the first time they’d been on this kind of expedition. Their resilience impressed Berry. “Several said, ‘This is the hardest thing I’ve ever done,’ which was awesome,” he said, “because it’s a challenge and you’re not going to grow and develop without pushing yourself. I was really proud of everyone at the end of week with what they accomplished, stepping outside of their comfort zones.”

On the way back to Lynchburg, the group stopped at Manatee Springs State Park in Florida, where they set up camp and grilled hamburgers and hot dogs. They also saw about 15 manatees lumbering in the crystal-clear water. While it’s illegal to touch the manatees or get too close, the students swam, kayaked, and snorkeled around them. 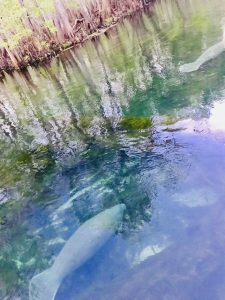 O’Loughlin, for one, was thrilled. “Matt was like a kid at Christmas,” Berry said. “He was looking forward to that all week. He was gung-ho about seeing some manatees on this trip and we promised he would.”

The all-inclusive trip, everything from transportation to gear, cost students $300 each — far less than what some trip-planning companies charge for a similar Everglades adventure. Berry said when it comes to outdoor programs at Lynchburg affordability is a key factor.

“That’s what this was all about, making an expedition affordable and accessible for students and getting them out there,” he said. “Accessibility is a big thing for me with our program. That’s why our typical outdoor leadership trips are free or $5.”

Talk to the students and they’ll tell you it was money well spent. “When you read stuff like this that the school offers, go and do it,” Alexander said. “I was hesitant at first. We kayaked over 25 miles in four days. It was challenging, but a trip that was well worth it.”

Bucklew agreed and said, “This trip was a once-in-a-lifetime opportunity to explore a new national park and kayak through a new and exciting area with some of the coolest people on campus.”