/ Discover / Together again: art by friends Stovall and Daura unites in exhibition

In the 1940s, Central Virginia folk artist Queena Stovall took painting lessons — albeit briefly — from Pierre Daura, chairman of University of Lynchburg’s art department from 1945 to 1946 and later the namesake of its Daura Gallery.

Stovall, who didn’t start painting until she was 62 years old, was largely self-taught and had a distinctive, naive style. Her art teacher quickly decided that her talent and style were best left as they were and ended the lessons. What didn’t end, however, was a close friendship that developed between Stovall and Pierre Daura’s wife, the artist Louise Blair Daura. It was a friendship that continued until Louise’s death in 1972.

This semester, two exhibits in the Daura Gallery bring the two friends —more exactly, their artwork — together again: Louise Blair Daura: A Virginian in Paris and Inside Looking Out: The Art of Queena Stovall. The exhibits open Wednesday, January 17, with a preview and reception from 4 to 5:30 p.m.

“It’s just exciting to show these two women artists together,” Dr. Barbara Rothermel, director of the Daura Gallery, said. “Their works have never been show in conjunction with one another.”

Louise Blair Daura: A Virginian in Paris features portraits and landscapes by Daura, who was an active painter from the 1920s through the 40s. The exhibit, curated by the Georgia Museum of Art, includes 39 paintings gathered from several museum collections, among them the Daura Gallery, Georgia Museum of Art, and the Musée d’art Hyacinthe Rigaud in France.

Inside Looking Out: The Art of Queena Stovall features work by Emma Serena Dillard Stovall, who was better known by her nickname, “Queena.” Stovall was a native of Amherst County, Virginia, and is known for painting colorful scenes from rural life: funerals, farm auctions, berry picking, hog killing, wood cutting, etc. By the time of her death in 1980, she had completed fewer than 50 paintings, most of which are in private collections.

Curated by Ellen Agnew, the exhibit includes more than 40 paintings gathered from private collections and museums throughout the country, including the Fenimore Art Museum in New York, the Virginia Museum of Fine Arts, the Maier Museum of Art at Randolph College, and the Museums of Oglebay Institute in Wheeling, West Virginia.

The exhibit also includes furniture and other items owned by the artist and depicted in her paintings. A washstand, for example, appears to the left of the fireplace in Fireside in Virginia, a 1950 painting.

Seven paintings in the exhibit are from the permanent collection of the Daura Gallery, six of which were donated to the gallery in 2016 by Ellen and Bill Jamerson. “The Jamersons are huge supporters of the College,” Dr. Rothermel said. “They felt it was the appropriate place for [the paintings] to be and were thrilled to donate them to us. They have been tremendously generous to the gallery and to the College.”

According to Dr. Rothermel, several paintings in the Stovall exhibit have never been shown publicly before.

In conjunction with the upcoming exhibit, the College is sponsoring a Queena Stovall highway marker which will be dedicated in March. The marker, one of 16 new markers announced by the Virginia Department of Historic Resources in October 2017, will be placed in Amherst County, Virginia, near “the wigwam,” the farm where Stovall lived for many years. A reception at University of Lynchburg, to be held following its unveiling, will be announced at a later date.

Agnew and Dr. Rothermel also have co-authored a book of Stovall’s paintings. It will be published and available in March. 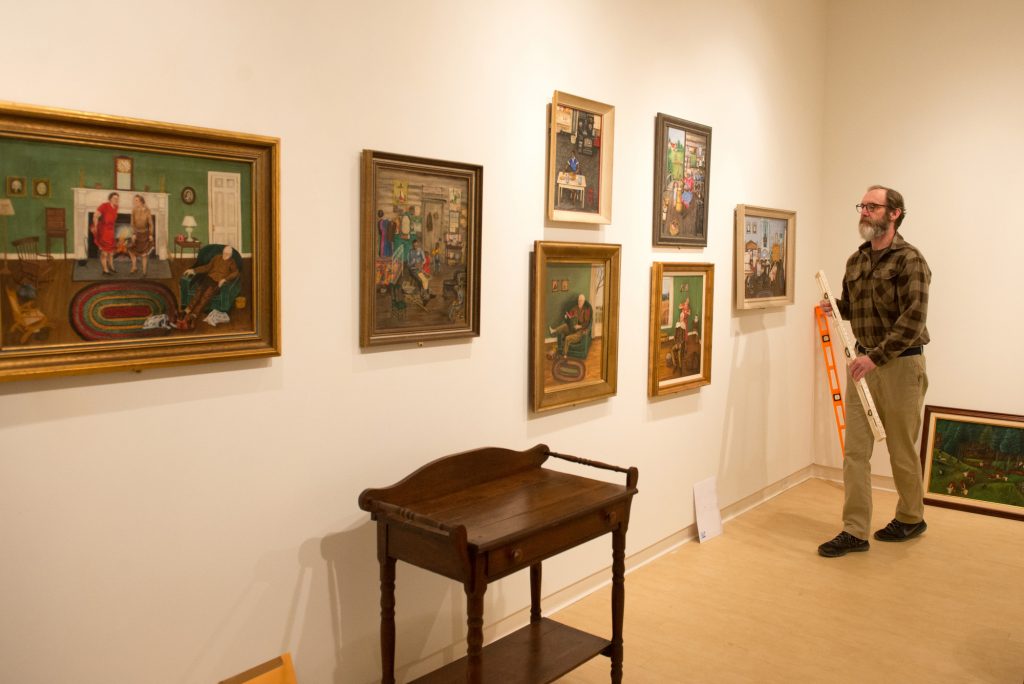