/ News / Former chaplain returns to LC for lecture: ‘Evangelicalism and the Decline of American Politics’ 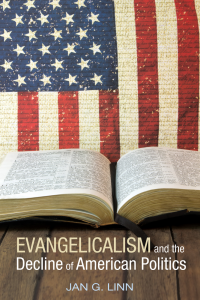 Dr. Linn, now a full-time writer based in Apple Valley, Minnesota, is the author of 16 books including, among others, What’s Wrong with the Christian Right (2004). What’s often called the “religious right” and its political involvement has long been of interest to Dr. Linn, who grew up in Lynchburg, Virginia, where the Rev. Jerry Falwell and others founded the Republican-aligned Moral Majority in 1979.

Dr. Linn also used to identify as an evangelical but these days describes himself as a “progressive Christian.”

Dr. Linn explained that “the issue for evangelicalism is it uses religious language but is guided by political motivations. That makes it partisan and no expression of Christianity can be partisan and have integrity. You just can’t do it.

“History is replete with examples [of] when there’s collusion between religion and politics. Religion is corrupt, so is politics. It’s very distressing. I wrote the book … for people to know what’s going on and see what’s happening, and not pretend as if this isn’t going to impact all of us. It impacts us, as Americans and Christians.”

For the book, Dr. Linn said he researched “almost every moral issue that our country has faced,” including abortion, closely examining decisions made in state and federal courts. He concluded, for example, that “Roe v. Wade is a conservative decision because it places limits on abortion” and “acknowledges that the states had a compelling interest in the well-being of the fetus, so states could pass laws.”

Problems arise, he said, when you look at decisions like Roe v. Wade through a religious lens instead of a political one. “The [U.S. Supreme Court] justices tried to balance the moral concerns with what they understood the 14th Amendment to say in the Constitution and the whole business of the right to individual decision making. That’s just one example,” he said.

“That led me to see that most of the decisions that evangelicals are making are political, so Donald Trump was going to be their candidate, not because he was Donald Trump but because he was a Republican. … [Evangelicalism] has sold its soul and most people know it. They don’t see it because of their political beliefs.”

Insisting that the book is nonpartisan, however, Dr. Linn said he “criticizes Democrats, too,” and that the lecture should be of interest to “any American who pays attention to politics and is concerned about what is happening with our government and with, basically, the dysfunction of our federal government and the inability to work together.”

While in town, Dr. Linn also will appear at Givens Books in Lynchburg from 10 a.m. to noon on Saturday, February 10.