Dr. Michael Robinson will present a lecture, “Doctor Has No Gender in English: Character Change in Popular Science Fiction and Superhero Texts,” at 7 p.m. on Wednesday, February 7. The event, which is part of the Westover Honors lecture series, will be held in the newly renovated Memorial Ballroom at Hall Campus Center. Admission is free.

The “Doctor” of Dr. Robinson’s lecture title, of course, refers to the popular British TV series Doctor Who. Over the past 50-some years, the Doctor has been portrayed by a dozen different male actors. The Doctor’s 13th iteration, however, takes the form of a woman, played by British actress Jodie Whittaker. Dr. Robinson’s lecture will focus on the Doctor and other gender-bending characters from the world of science fiction and superheroes.

Dr. Robinson, department chair and professor of communications at University of Lynchburg, has been a lifelong fan of Doctor Who, science fiction and superheroes. It’s no wonder that he’s known around campus and beyond as a pop culture expert. 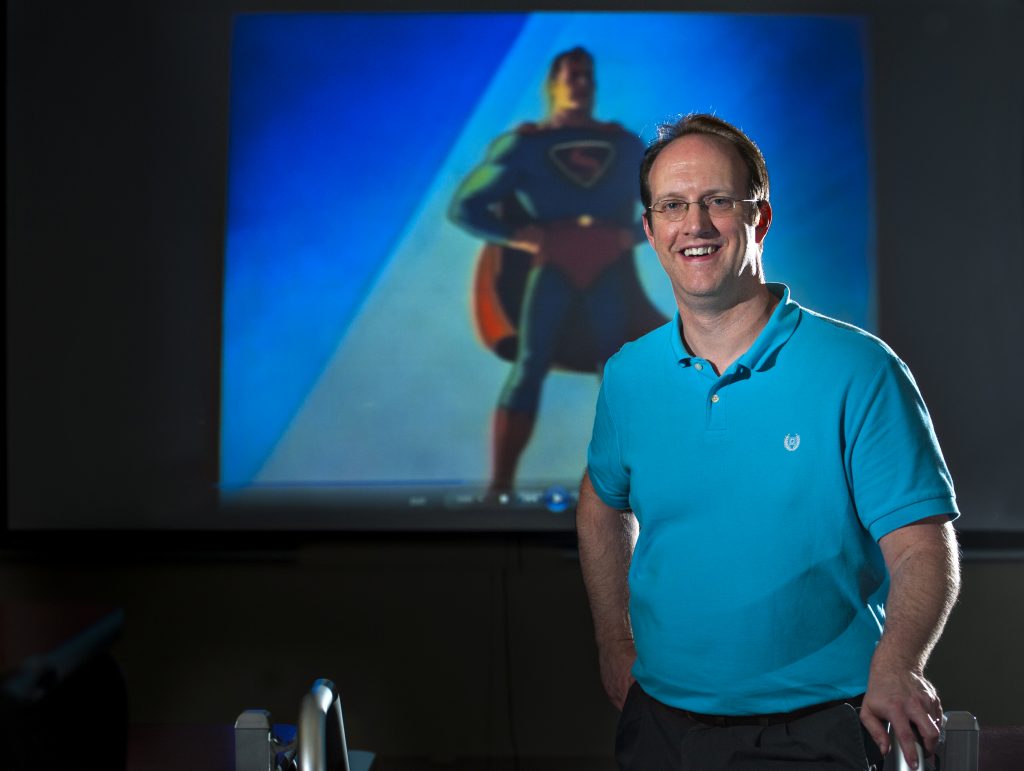 “My father bought me my first comic when I was five, Amazing Spider-Man #124,” he said. “My mother said I was a Star Trek fan in utero. I grew up playing Dungeons & Dragons and ran around seeing as many movies — especially Star Wars — and television shows — especially Doctor Who — as I could.”

When he got to college at the University of Maryland, College Park, Dr. Robinson said he was surprised to discover that his passion could actually be his major. “When I discovered this major as an undergraduate — it was called Radio-Television-Film at Maryland — I just couldn’t believe that people could study and teach about this kind of material,” he said.

He later did his master’s thesis on Star Trek, studied American culture for his PhD, and joined the University of Lynchburg faculty in 2000. “When I joined the Lynchburg faculty, the big nerd culture boom was just starting,” he said. “It’s been very exciting to see things that once were treated as such terrible things become accepted.”

At Lynchburg, Dr. Robinson teaches classes on popular culture and communications and writes a column, “The Nerd Factor,” for the student newspaper, The Critograph. He says his upcoming lecture will “look at the recent regeneration of the Doctor on Doctor Who and move into the ever-changing world of popular culture.”

In addition to discussing the first-ever female Doctor, Dr. Robinson said, “I want to talk about how this fits into some other recent changes — Jane Foster becoming a female Thor in the comics, for example — and how fans have reacted.”

He says the lecture should appeal to anyone with an interest in pop culture, science fiction, or superheroes, and that you don’t need to be a Doctor Who fan to keep up. “I hope we can have a fun evening that expresses the weird way that popular culture is constantly shifting — ‘Oh no, Ben Affleck is Batman!’ — but is also regarded as remaining constant,” he said. “Batman is always Batman.

“Hopefully, anyone can enjoy the presentation. I try to keep everything I do open to unfamiliar audiences. You don’t have to be deep into Doctor Who lore to follow it. So, I think folks who like popular culture can enjoy it, but particularly people who like sci-fi and superheroes.”