They competed against teams from six larger schools schools, including Virginia Tech and James Madison University, in the third annual Caring for the Caregiver Hack November 3 – 5. Sponsored by Virginia Navigator and the Lindsay Institute for Innovations in Caregiving, the contest challenges college students to leverage technology to improve the health of people who are primary caregivers for family members. 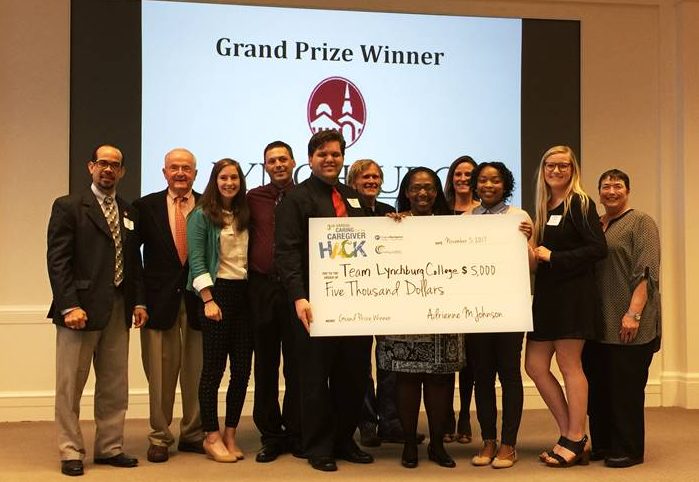 Technology has the potential to help caregivers connect with their community, exercise, and take other actions to help them deal with the emotional and physical challenges of giving care, said Adrienne Johnson, executive director of Virginia Navigator.

“Technology is important because most people have access to technology, but family caregivers are not utilizing it as much as they could be,” she said. “Our hack is designed to get multidisciplinary students to turn this problem on its head and come up with some solutions. Secondly, it’s to get some word out there across the state that there are tech-based tools that could really help caregivers.”

The hack event began with each team meeting with caregivers to learn about the challenges they face. Then the students brainstormed and started designing apps or websites to help address those needs. 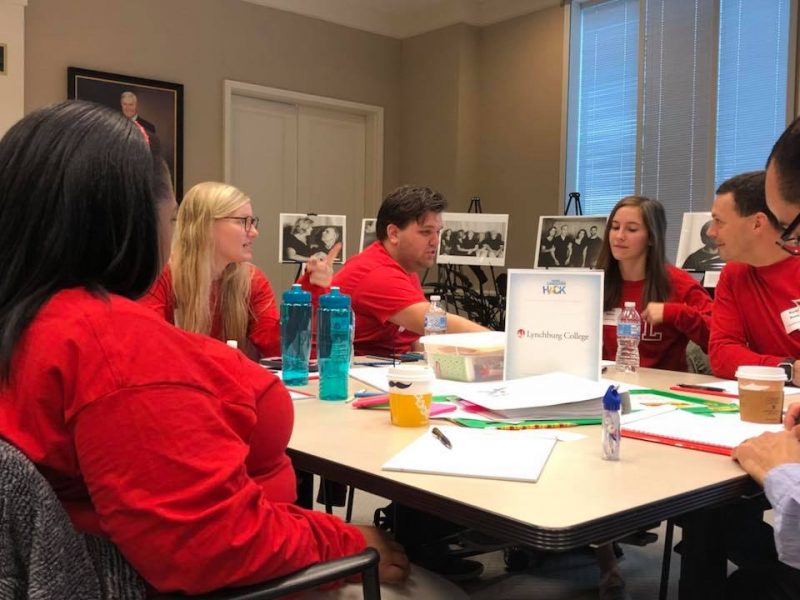 “It was truly teamwork,” said Ashley Moore ’17, a health promotion graduate who is earning her master’s degree in public health at Lynchburg. “Once we discovered the needs of our caregiver, we came up with ideas that would help our caregiver and ways we could measure the success rate.”

The team decided work on an app that uses questions to prompt caregivers to take breaks for physical, social, spiritual, and psychological health. As the app user fulfills tasks suggested by the app, a virtual tree grows illustrate the individual’s self care.

Rafael Genao, fellowship director for the Physician Assistant Medicine program, served as the team’s coach. He was impressed with the app’s simplicity and potential. “The whole idea was to remind caregivers to take care of themselves, even for a few minutes in the day, to decompress and focus on themselves so they can be better prepared to continue with the tasks and challenges they have on their plates as caregivers,” he said.

On Sunday morning, all the teams presented their ideas, after which Lynchburg was announced as the winner.

“The Lynchburg team showed that they had really listened to their family caregiver when they formulated their idea for the tech-based tool,” Johnson said. “Their app is going to be helpful for caregivers, making sure they take care of themselves.”

The judges also liked the app’s potential as an easy-to-use, off-the-shelf solution. “It was very comprehensive, and they had done the work to make it a product that could be very close to going to market already,” Johnson said.

The team won a $5,000 cash award that had been announced before the competition. However, the sponsors threw in two bonuses: another $5,000 the team can use as seed money to develop and deploy the app, 10 hours of legal consultation related to the app, donated by the Richmond law firm LeClair Ryan, and an invitation to UnitedHealthcare’s Innovation Center in Washington, D.C., where the team members can meet with leaders in health care innovation.

“It felt amazing to win,” Moore said. “Words cannot describe how it felt. The most rewarding feeling was that we got to help a caregiver, and hopefully we will help many caregivers in the future.”