University of Lynchburg stood out as leaders in the Mid-Atlantic European Union Simulation November 9 – 11.

The students represented a delegation of government leaders from the United Kingdom and Ireland at the conference, which simulates actual proceedings of several EU government bodies, such as the European Parliament and the European Council. Several Lynchburg students were elected leaders in party groups and won awards. 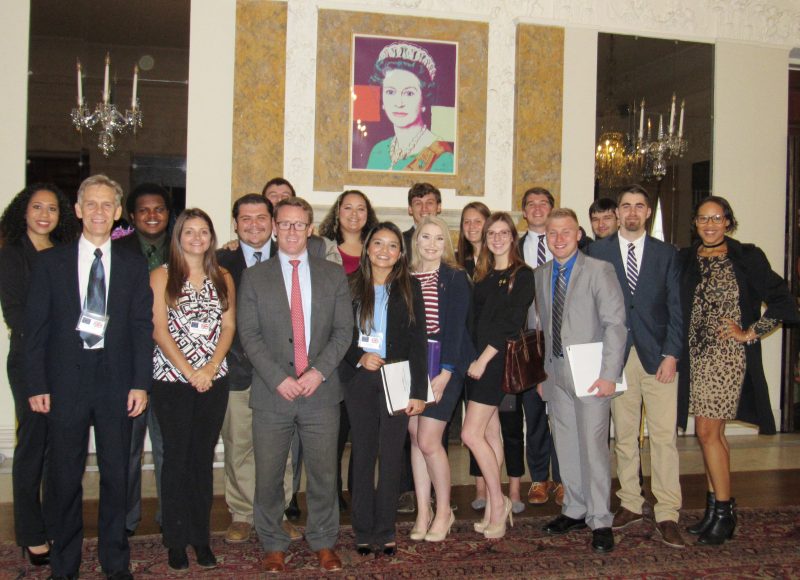 “This experiential program is a premier leadership training opportunity for students,” Lynchburg political science professor Dr. Marek Payerhin said. “They interact with real-life diplomats from the embassy of the country they represent. They negotiate, bargain, compete, and cooperate with their peers from other universities and colleges.

“They produce policy papers and debate legislation based on actual documents and policies of the European Union. The simulation is a very real experience in terms of emotions, leadership, and intellectual training for future careers in related disciplines.”

The members of the delegation are enrolled in one of two courses at University of Lynchburg: European Union Politics or EU Leadership. They spent the semester preparing for the simulation. “Preparation involves an introduction to major European countries and then several weeks of analysis and review of European politics: institutions, policies, and actual documents,” Dr. Payerhin said.

Each class also included what Logan Hancock ’18, standing in for the Republic of Ireland’s Prime Minister Leo Varadkar, called a “war session.” Hancock, a political science major with a minor in international relations and a pre-law concentration, explained that “each person would explain what is currently going on with their roles in the real world and try to come up with strategies for the simulation.” 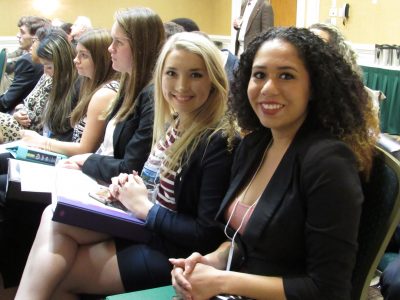 Roles were assigned by Dr. Payerhin, with first-time students representing members of the European Parliament, or MEPs, and second-year, Leadership students taking on higher-level officials, such as prime ministers, commissioners, and other heads of state.

Tscharner “Tess” deGraffenried ’18 served as a commissioner. “I was tasked with working with the commissioners from other schools to draft the legislative proposal that essentially runs the entire simulation,” she said. “I [did] not represent any member state in particular. For example, I did not represent the UK alongside my peers, but rather represent[ed] the interests of the European Union as a whole.”

deGraffenried, a criminology major with political science and international relations minors, said the experience taught her and the other students “how to effectively put aside their own biases and interests and think objectively. Furthermore, it enhances many important leadership qualities, such as communication, conflict resolution, public speaking, and cooperation.”

With the UK planning to leave the EU in 2019 — a move commonly referred to as “Brexit” — the Lynchburg delegation faced what Dr. Payerhin described as “some formidable headwinds as other member states of the EU are upset over the UK’s decision to leave the EU and proceeded to block and stonewall our delegation at every step.”

Lynchburg’s Brits didn’t make it easy, though. Representing the UK for the third year in a row, the students were armed and ready with proposals, arguments, and diplomatic skills.

“Our members of the European Parliament — Caelyn Andrews, Laura Arriaza, Kimberly Mendez Lemus, and Stephen Ruppel — were elected leaders of all party groups they joined,” he said, “and Tyler Jones was elected a committee rapporteur.”

When all was said and done, the Lynchburg delegation received two of the eight awards available at the simulation. deGraffenried was named Outstanding Commissioner and Ridenour Outstanding Head of Government. “All students contributed to the substantive legislative work in their areas and were impossible to ignore,” Dr. Payerhin said.

Lynchburg was one of 11 colleges and universities from the region to participate this year, and it was the 20th year the College has been involved in the EU simulation. The following Lynchburg students participated: