The University of Lynchburg Alumni Association presented awards to numerous alumni during the Alumni Awards Gala during Homecoming 2017.

Two University of Lynchburg alumni whose lives and careers exemplify excellence and public service received the highest honors from the Alumni Association, which honors the memory of a member of the College’s first graduating class who served the institution for many years. 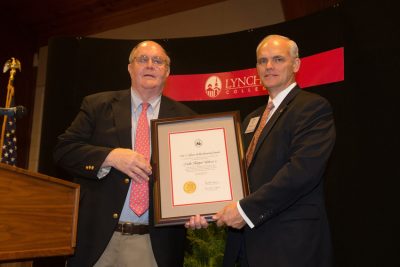 has served the Lynchburg community with distinction for many years. After graduating from University of Lynchburg and serving in the U.S. Navy, he  entered the insurance industry through a management training program of the Hartford Insurance Group. In 1971 he returned to Lynchburg to work for Campbell Insurance. He became the company’s vice president in 1974 and president and CEO in 1986. His many years of leadership made the company one of Lynchburg’s finest corporations.

Following the example of his parents, who devoted their time to many causes, he has served on the boards of many public and nonprofit agencies, including the Greater Lynchburg Community Trust, Lynchburg Fine Arts Center, Lynchburg Regional Chamber of Commerce, the American Heart Association, the American Red Cross, and Lynchburg City Schools Education Foundation. Holt served as a University of Lynchburg trustee for many years and received an  honorary doctorate from the institution in May 2017. 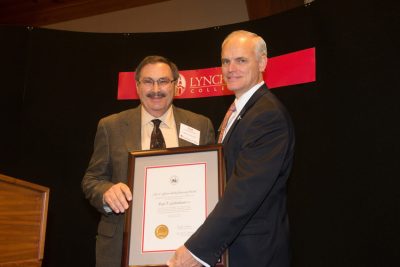 Dr. Paul Goldenbaum ’66 also received the T. Gibson Hobbs Memorial Award. Dr. Goldenbaum was a Richard Thornton Scholar at Lynchburg. After earning his PhD, he was on the faculty at Southern Illinois University, where he received the Amoco Foundation Teaching Excellence Award. Then he worked for Becton Dickinson Diagnostics in Baltimore for 24 years. He served as director of research and development, managing 105 employees until his retirement. He authored numerous scientific publications in medical and scientific journals and has presented at dozens of national and international conferences.

Even with this impressive career, he found time and continues to be a Certified Texas Master Naturalist, a frequent builder with Habitat for Humanity, and a docent with the San Antonio Botanical Garden. He has served in various capacities at his hometown Zion Lutheran Church.  As an involved alumnus, he co-chaired his last two class reunions and served on the Alumni Association Board for five years as the chair of alumni outreach.

Three alumni received the Distinguished Alumni Award. Glenna Tillotson Lingafelt ’68, ’78 MEd was unable to attend Homecoming, but her award will be presented to her in the near future. Before graduating from University of Lynchburg in 1968, she graduated from what was then Averett Junior College, married Charles Richard Lingafelt, taught at Gretna High School, and had two sons, Charles and Phillip. In 1978, she completed a Master of Education at Lynchburg, and in 1992, she retired after a 26-year teaching career. She has served her community in a variety of ways. She has been active in her church, First Baptist of Gretna, since 1956. In 1994, she was elected to Gretna Town Council. She was mayor of Gretna from 1998 to 2012 and was named “Citizen of the Year” in 2001 by the Gretna Merchants Association. She is a member of Delta Kappa Gamma in Pittsylvania County and Kappa Delta Pi at University of Lynchburg. 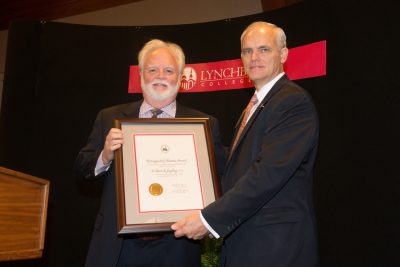 Dr. Will Kesling ’70 was honored for his outstanding career in musical conducting and education. He has served as the director of choral activities at the University of Florida as well as the director of the Gainesville Civic Chorus Master Chorale and Philharmonic Orchestra for the past 14 years. Previously he was the director of orchestra and choral programs at Utah State University for 19 years. He has conducted groups including the National Philharmonic, the Czech National Orchestra Choir, the Mormon Tabernacle Choir, the St. Petersburg State Symphony Orchestra in Russia, and other groups. He has conducted in venues such as Constitution Hall, Carnegie Hall, and the Kennedy Center for the Performing Arts, as well as major concert halls overseas. In recognition of his achievements, Dr. Kesling was awarded The Congressional Order of Merit by the U.S. Congress in September 2003, the Ronald Reagan Gold Medal in November 2004, and the Congressional Medal of Distinction in 2006. 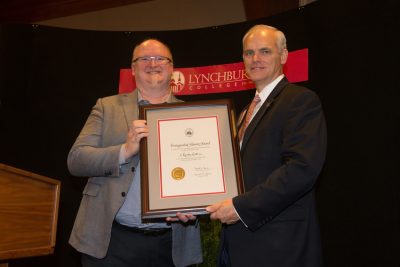 J. Kevin Scott ’94 was honored for his leadership in the technology industry and scholarship in computer science. His 20-year career in technology spans academia, industry, and philanthropy as a dedicated researcher, cutting-edge engineer, and respected leader. A Westover Honors student during his time at Lynchburg, he received the Richard Clarke Sommerville Scholar Award during his senior year. He engaged in graduate studies at Wake Forest University and the University of Virginia. Scott started as an engineer and engineering leader at Google, where he oversaw mobile advertising, including the integration of Google’s $750-million acquisition of AdMob, the world’s leading platform for mobile monetization. In February 2011, he joined LinkedIn as the senior vice president of infrastructure. After Microsoft acquired LinkedIn, Scott was named chief technology officer of Microsoft. He and his wife, Shannon, co-founded The Scott Foundation in 2014 to provide opportunities for children by expanding access to early childhood education programs, addressing and alleviating childhood hunger, and instituting programs to encourage girls and women to pursue careers in computing, technology, and other STEM-related fields. 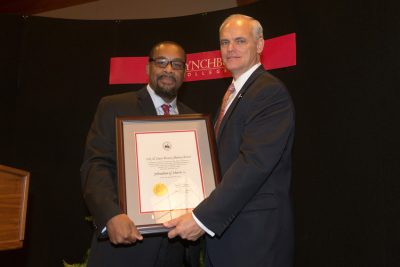 Johnathan Harris ’02 received the M. Carey Brewer Alumni Award, which honors young alumni who have made outstanding contributions to society. Harris was a standout student-athlete during his tenure at Lynchburg, achieving NCAA All-American status all four years. He worked in the public schools for several years. As a strong advocate for parents desiring a first-rate education for their children, he grew weary of an educational structure that did not empower teachers to give independent and creative learning experiences to their students. In 2012, he created Lynnhaven Academy, a private day school serving students in grades 5-12. The school started with one student and grew to more than 40 in five years. The school specializes in a hands-on learning approach, all while preparing students for college. He has received commendations for his dedication to the field of education from Senators Mark Warner and Jennifer McClellan, as well as Governor Terry McAuliffe. Under his leadership, all of Lynnhaven’s graduates have enrolled in college. In fact, its first graduate is a junior at Lynchburg today. 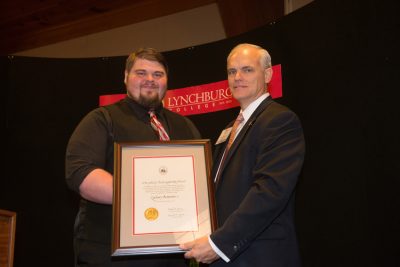 Zachary Betterton ’17 was awarded the John G. Eccles Leadership Award, which recognizes student leaders. Betterton served as a highly regarded resident assistant and an intern in the Office of Residence Life during his years at Lynchburg. As a physics and mathematics major, he received training at Apache Point Observatory and participated in NASA-funded research into “Near-Earth Asteroid Analysis.” He received the Lynchburg Individual Leadership Award and the Outstanding Senior Award in 2017. He currently teaches physics, math, and computer science at the Carmel School in Ruther Glen, Virginia. 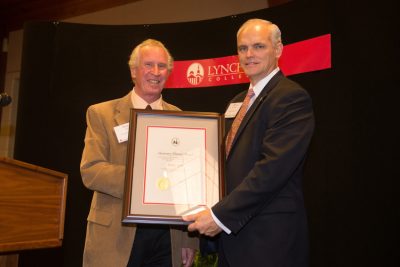 Dr. Barry Lobb received the Honorary Alumni Award designation. Dr. Lobb has taught both mathematics and computer science at Lynchburg since 1985. He has chaired both departments and served as dean of the School of Sciences. He is a member of the Phi Kappa Phi National Honor Society and the National Theatre Honor Society and was named an “Outstanding Educator in America.” He is a recipient of the College’s Elsie E. Bock Citizenship Award for outstanding service by a faculty member. In addition to his scholarly work, he has helped on stage and behind the scenes in campus theatre productions, including Guys and Dolls, The Tempest, and I Hate Hamlet.

Several individuals and teams were inducted into the University of Lynchburg Sports Hall of Fame. They include: 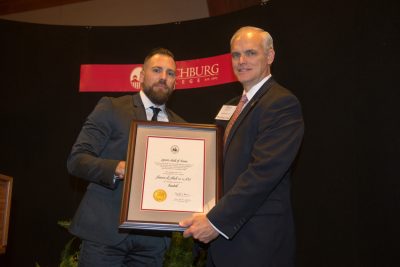 Shawn Abell ’06, who was recognized as a first-team All-ODAC shortstop for two years and received the Senior Male Athlete award. He played professional baseball for the Brockton Rox of the Canadian-American League and then coached college baseball. For the past two years, he has been the assistant coach at Liberty Christian Academy. He also started Jamerson CrossFit, the only adaptive CrossFit program in the area. 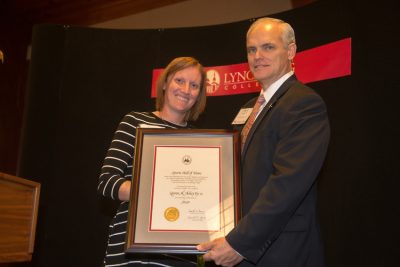 Lauren Askey Ey ’08, a soccer player who was “Rookie of the Year” for Lynchburg as well as the ODAC in 2004. In 2006 and 2007, she was Lynchburg’s Female Scholar Athlete and was named Scholar Athlete by the ODAC both years. For seven years, she ran the Coerver Coaching Soccer Camps in Maryland, where she teaches at Anne Arundel County Schools. Since 2012, she has worked as head athletic trainer with the Catholic High School of Baltimore, where she initiated the first sports medicine program at the school and received the prestigious First Team NATA Safe Sports School Award. 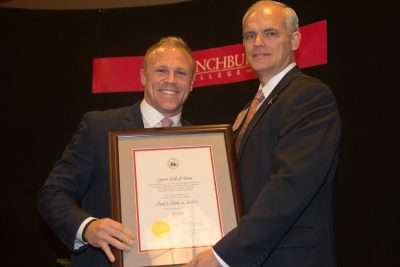 Chad Clarke ’06, ’08 MEd, a four-year starter on the Lynchburg men’s lacrosse team, who earned All-American honors three times. He was the College’s 2006 Male Senior Athlete of the Year. He was a member of the men’s lacrosse program’s first two ODAC championship teams, in 2003 and 2005, and played in three NCAA tournaments. While earning his master’s degree, he served as assistant coach as the team clinched its third ODAC championship. Outside of his professional career, he remains involved with lacrosse as an assistant coach for Archbishop Moeller High School, which captured the Ohio State Championship in 2017. 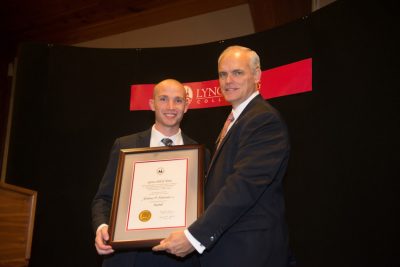 Anthony Palmisano ’04, who earned All-State, All-Region, and All-American honors in 2004, in addition to Lynchburg’s Athlete of the Year Award. In his senior year, the baseball team led the nation in three statistical categories: team batting average, slugging percentage, and scoring. He is a Washington, D.C., metro district sales manager for Ferguson Enterprises. 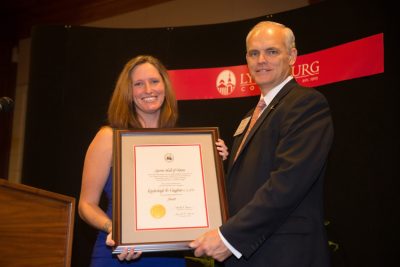 Also, the 1991 men’s cross country team and 1997 women’s soccer team were honored as Teams of Distinction.