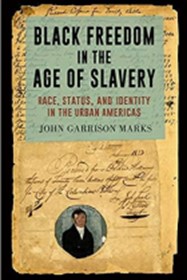 Congratulations to John Garrison Marks ’10 (history and museum studies, Westover Honors) on the publication of his book Black Freedom in the Age of Slavery. John Marks is a 2010 grad (history and museum studies, Westover Honors) who went on to receive a PhD from Rice University in 2016. He is now Senior Manager, Strategic Initiatives, for the American Association for State and Local History (AASLH).

John was the featured speaker on Reddit’s Ask Historians on the day the book was released, October 13, 2020. You can see it here.

“An important contribution to the history of black freedom, this comparative study of free people of color in Charleston and Cartagena is equally attentive to the broader Atlantic and to local economic, social, demographic, and institutional circumstances. The result is a rich, textured, and locally grounded reconstruction of people of African descent’s relentless pursuit for standing, respectability, family and community in the Americas.” — Alejandro de la Fuente, Harvard University

“Black Freedom in the Age of Slavery makes a crucial contribution to the history of the Atlantic world. By linking the lives of free blacks in Charleston, South Carolina, and Cartagena, Colombia, Marks’s work bridges the sites of Atlantic slavery, treating disparate geographies as fundamentally linked and raising broad and important questions about the nature of black freedom. Marks’s deeply researched and beautifully written study is an important work that will impact the fields of Latin American history, North American history, the histories of slavery and freedom, and beyond.” — Jennifer L. Morgan, New York University

“In Black Freedom in the Age of Slavery John Marks has produced a carefully researched and innovative study of how enslaved people in the Atlantic slave ports of Cartagena and Charleston achieved freedom and sought respectability under very different social, economic, and political systems. The key he argues, was the access to public institutions free people of color enjoyed in the Spanish city, and the commitment Charlestonians made to preserve slavery in perpetuity. Based on deep archival research in Colombia, Spain, and the United States, this is a welcome contribution to the study of slavery, racism, and emancipation.” — Jane Landers, Vanderbilt University

Cara Leepson ’09 was recently appointed arts director for Palette 22, opening January 2016 within the heart of The Village at Shirlington at 4053 Campbell Avenue, Arlington, VA, 22206.

A native of Middleburg, Virginia, Leepson received her BA in Studio Art with an emphasis in photography and minor in museum studies from University of Lynchburg. She earned her MA in Art History & Museum Studies with a focus on public programming and contemporary art from Georgetown in 2011.

Her art education and career path has taken her to Charleston, SC; Washington, DC; Florence, Italy; and New York City to study and work in museums, galleries, and non-profit art centers. Leepson has garnered experience working with the Smithsonian Institution’s Hirshhorn Museum and Hillyer Art Space. She has also worked at the art management firm ArtSee as Washington’s creative program director, and at Potomac, Maryland’s Glenstone as a collections assistant and docent before accepting the new director position at Palette 22. One of Leepson’s first initiatives is to spearhead two art programs that will play an integral role in launching Palette 22.

Jared Bloomquist ’15 is the new graduate assistant in the Daura Gallery. Jared is pursuing an MBA at LC.

Sarah Overman ’15 received the award for Outstanding Achievement in Museum Studies in 2015. Sarah worked as a student assistant in the Daura Gallery for two years before joining the staff at Amazement Square Children’s Museum in Lynchburg. Sarah is now the Box Office Manager for The Shakespeare Theatre of New Jersey in Madison, N.J..

Gibb Zea ’13 was recently featured in the article “Living the Life” in the journal Muzzleloader (July/August 2015) about the interpretive staff of Fort Ticonderoga, where Gibb is an artificer tailor.

Sarah Turner ’12 is the Education and Outreach Coordinator for the Hollywood Theatre in Portland, Oregon. Sarah received her MA in Museum Studies from the University of Oregon in 2014.

Ellie Rapp ’11 was awarded a Masters degree in museum studies from the University of Leicester. Her thesis was titled “The Fancy of His Existence: Observations on Family Learning at the Sherlock Holmes Museum, London.”

John Marks ’10 is a doctoral candidate in history at Rice University, completing a dissertation examining racial identity among free people of color in the Atlantic World. He expects to defend his dissertation in Spring 2016.

Cara Rose Leepson ’09 works at Glenstone, a museum of art, architecture, and landscape in Potomac, Maryland. Cara studied at Georgetown University after completing her degree at LC.

Danni Schreffler ’08 is the office manager at the Maier Museum, Randolph College. Danni was an undergraduate employee and then the graduate assistant at the Daura Gallery while completing her MA in English.

Caitlin Toynbee ’08 is a manager of annual giving for the American Society of Civil Engineers Foundation.

Nellie Gulick ’07 received her Master’s in Historic Preservation from Colorado State University in 2012.

Congratulations to Jason Powell ’05, museum curator for the U.S. Army Center for Military History at Ft. Belvoir, Virginia. Jason received the Department of the Army Achievement Medal for Civilian Service for successfully relocating the U.S. Army Ordinance Museum, the largest in the history of the military branch.

Matthew Speliotis ’03 was awarded a Masters degree in history from Salem State University.