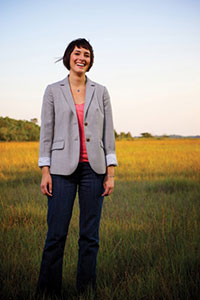 Kate Skaggs ’06 is definitely planning for the future. She is the CoastSmart Communities planner for CoastSmart Program within the Maryland Department of Natural Resources. She manages small coastal zone grants to help cities and counties plan for sea level rise and coastal hazards.

Kate recently got the job after completing a two-year fellowship with the Washington Department of Ecology, where she helped find ways to deal with the effects of global warming.

In 2010, Kate received the prestigious National Oceanic and Atmospheric Administration (NOAA) Coastal Management Fellowship to work on a climate change-related project focusing on the outcome of rising sea levels. “There are up to six new fellows every year,” she said, “each with a different project.”

A native of College Park, Maryland, Kate was an LC environmental science major and Westover Fellow, which helped prepare her for her work with the department’s Shorelands and Environmental Assistance program. She worked alongside other agencies, including Washington’s Fish and Wildlife program, Department of Natural Resources, and the Puget Sound Partnership. “All ultimately work together to manage, regulate, and plan for coastal issues,” she said.

Washington has more than 2,300 miles of marine shoreline. A statement from the Department of Ecology’s website says, “The potential impacts of global warming dwarf those of other environmental threats.” Scientists at the University of Washington Climate Impacts Group project predict that sea level will rise in the Puget Sound region approximately six inches by 2050.

A six-inch rise can be expected to:

“Regardless of why things may be changing,” Kate said, “people are recognizing that they are changing and that we should plan for this now.”

To put it simply, Kate said her work was much like taking an inventory of everything along Washington’s coasts – such as roads, resources, and parks – and figuring out which areas are most vulnerable. “How much are you willing to risk when these areas flood?” Kate said. “Now take that level of risk and plan for it.”

Kate said the favorite part of her job was meeting with local planners and talking about coastal management solutions. As they collectively worked toward the same goal, she said that, in addition to her professional growth, she also gained many friendships along the way.

Kate hasn’t lost her connection to her alma mater. “The friends I made at LC are still my best friends,” she said, “and I still rely on the professors I had for advice on life.” Kate’s own advice to others is: “Make sure you enjoy what you do and live in fun places.”