When Emily Brown ’02 was a student at LC, she could not have imagined that she would be working as an online editor at USA TODAY so early in her career.

But that’s what happened. She majored in communication studies with an emphasis in journalism and was always intrigued with online work. “It opened a lot of doors to marry those two loves,” she said. “I’ve truly loved every job I’ve had.”

Emily is now U 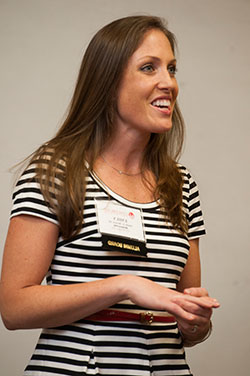 SA TODAY’s Mobile Editor, managing content across iPhone, iPad, Android, Windows and Blackberry apps. From content creation to programming and presentation, she helps produce and guide content for mobile platforms. Before this job, she was the online editor for national news and managed USATODAY.com’s homepage.

A native of Stafford, Virginia, Emily learned about LC through recruitment materials, but when her dad saw the price, they laughed and tossed them out. Emily was an impressive long-distance runner, however, and she was pursued by a couple of determined track and cross country coaches, Jack Toms ’69 and Jeff Fedorko ’94, ’00 MBA. They convinced her to visit LC and commit to run here. “I really liked the coaches and the team,” she said. “I made the right decision.”

At LC, Emily was captain of the women’s cross country and indoor and outdoor track teams, a Critograph editor, a Connection Leader, and a member of the Westover Honor Society.

After graduation, she went straight to Syracuse University for a one-year master’s degree program in magazine, newspaper and online journalism, where she focused on writing.

“My first job out of school was as a features reporter for a mid-sized daily newspaper covering Prince William County, Virginia,” she said. “I loved reporting, but was enticed by the online world and soon moved on to AOL.”

At AOL, Emily was covering entertainment, events, and restaurant openings in and around Washington, D.C. “I had a blast,” she said. Unfortunately, Emily got caught up in massive layoffs at AOL and found herself unemployed for eight months. She kept in the thick of things by freelancing and doing temporary work for the Washingtonian magazine.

She applied for a job with USA TODAY, but the paper went into a hiring freeze.

Emily didn’t have to wait too long before an unexpected opportunity caught her attention. She went to work for Stars & Stripes, an independent military newspaper, covering events at the Bush White House. She got to write about Frank Buckles, the last WWI survivor who just died last year at 110. “He was 107 when I spent the day with him,” Emily said. She also got to go to Guantanamo Bay, Cuba to cover life at the naval station.

She had only been at Stars & Stripes for six months when USA TODAY called, offering her an online editing position. “I sobbed,” Emily said. As much as she knew that was the right move, she hated giving up that job so soon.

As online editor at USA TODAY, Emily focused on the way the paper looks online in terms of story selection, headlines, photos, video, and graphics. “I’m concerned about the overall presentation of the story and experience of the reader,” she said.

She vividly recalls one story. “My first big breaking news story on my own was when Ted Kennedy died,” she said. At 1:20 a.m., she had to get the story on the website, send alerts to the mobile devices, Twitter feeds and email subscribers. She also alerted the page 1 editors. “It really was one of those stop-the-presses moments,” she said. USA TODAY was one of the few national papers to carry the story the next morning.

When she’s not hard at work, Emily still enjoys running, as well as getting better acquainted with the nation’s capital. “I love to explore as much as possible,” she said.