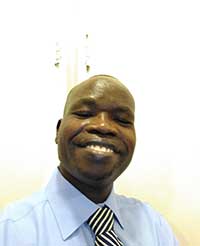 “A career in medicine has been one of my dreams, since childhood,” Zekharia Idro, PA-C, now dreams of becoming a public servant and organizing medical mission trips to his home country of South Sudan.

PA Idro’s journey to a career in medicine began when he was a child in South Sudan, “As a child, I saw a lot of trauma, a lot of injuries, a lot of death. There, even with no training, if you see someone in front of you who needs help, you naturally help them. So at a very early age, that experience gave me a level of interest in medicine.” During the second civil war in South Sudan, he was one of around 4,000 individuals removed from the conflict by the U.N. He came to the U.S. in 2003. “Some of my fellow students have made good progress in life. I never imagined that one day I would own a house, I would one day own a car, and be active in my community, and it has been quite a journey,“ he reflects.

He currently practices in urgent care near Palm Springs, California, in an area that is considered underserved — the ratio of medical providers to population is approximately 1 for 1000.PA Idro likes the versatility of urgent care. “I see a little bit of everything. It is very satisfying — I enjoy practicing here.” He sees upward of 100 patients on a daily basis. “We function very much like an emergency room. Unless someone is in a life or death situation, they come to our clinic.” PA Idro says he functions very independently as a PA in his practice with three other providers, two NPs and one other PA. “During our rounds, we depend on our own experience and knowledge to treat our patients.”

“Life is not just about doing things for yourself. It is about helping other people. Life itself is about others. We cannot exist without others.”

As a student in the DMSc program, PA Idro says, “Global Health has been interesting — most of my writing has had to do with where I come from, in South Sudan. Specifically I have written about women’s health, children’s health, and sanitation. I count myself and my family as very lucky, because my mother, a mother of nine children, did not suffer as many others have suffered.” Of his coursework, he says, “I have found all of the courses in the DMSc to be very relevant and applicable to my situation. We have learned things about Healthcare Management, how our system works. Each course has been impressive and challenging, teaching you how to think critically and independently.”

PA Idro says that getting his doctorate fits into his personal and professional long term goals. “In the future, I would love to run for office; I want to be a public servant. When I see my patients, and how the system is working with them, I see myself there. I want to advocate for them. When I came to the U.S., I became a citizen, but I still see myself as an immigrant. The system appears to not be working well for the underserved population I see.” He says he sees people dealing with trauma every day, living in an area where hearing gunshots is common and weekly homicides are reported. He says, “I would love to add my voice to help in this area. I have a goal of being a public servant and doing what I can to help the poor in this community.” He notes the problem with access to care for patients with chronic issues such as hypertension and diabetes which are controllable conditions: “There are people suffering here, needlessly, and they need an advocate.”

PA Idro has another goal as well: to find and mobilize a group of 15-20 medical providers to go to South Sudan. “We could go to a specific town, perform wound care, treat people with malaria and other conditions — perhaps dentists could go also. It would be a voluntary medical mission We could fund raise, save for the trip, and go for two weeks. They will appreciate it.” He says he was inspired by a friend from Tanzania who organized a trip to Haiti after the Tsunami of 2005. “People in this country, myself included, often take for granted the things we have here, the freedom to do what we want to do. Life is not just about doing things for yourself. It is about helping other people. Life itself is about others. We cannot exist without others.”