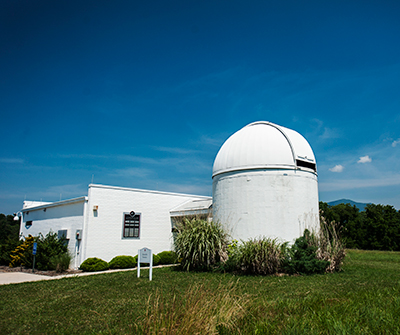 The Belk Astronomical Observatory sits at one of the highest points on the Claytor Nature Center property (approximately 960 feet above sea level).

The observatory features a 177-square-foot dome housing the primary telescope, an observation deck equipped with 12 piers for mounting smaller telescopes, and a single-story, five-room structure with an insulated control room.

The opportunity for astronomical study and night sky viewing is appreciated by the University community, local schools, and the public.

The observatory was named after former state senator Irwin Belk of Charlotte, North Carolina, for his contributions to the project.

We welcome you to Belk Observatory!

Crystal Moorman ‘09  began her work at the Belk Observatory as an LC undergraduate, finished her PhD in Astrophysics at Drexel University and now has taken over as the Observatory’s new Director.

Danielle oversees the education and outreach programs at Belk and the Claytor Nature Center. Danielle has degrees in Biology from Knox college (2006), Western Kentucky University (2010), and the University of Virginia (2014). As an ecologist and educator, she has spent many years observing and teaching about plants and animals in their Earthly environments. Management of the Belk Observatory programs has been her first opportunity to explore organisms in the context of their most basic evolution from and place in the universe. She particularly loves teaching people about extremophiles, such as tardigrades, that can be blasted into and survive the vacuum of space.

Trish Cerulli is a local science enthusiast and has been involved with the Belk Observatory since 2010, when she began volunteering as a docent.  She earned two degrees in chemistry, a BS from the University of Mary Washington in 2008 and an MS from the University of Virginia in 2014.  In graduate school, her coursework and research focused on astrochemistry, investigating the presence of chemicals and reactions within astronomical ices, both experimentally and observationally.  She currently is a member and serves on the Board of Directors at Vector Space, Lynchburg’s makerspace. Trish lives in Lynchburg with her daughters, dogs, and husband, to whom she was married on the grounds of the Claytor Nature Center at Cloverlea.

Our Belk docents freely offer their time to help us make our programs and Public Open Houses hands-on and interactive. Our docent teams are derived from professional, amateur, and budding astronomers and educators, with experience ranging from decades to just starting, and education from formal and informal means. They are University of Lynchburg faculty, staff, and students, as well as people from the community, some of whom commute 70 miles or more to be here! We could not do the things we do without them.

If you’d like to join our efforts to promote awareness and appreciation of our dark skies and the universe, email Trish at cerulli_tl@lynchburg.edu. There will be several training opportunities in the fall/winter of 2020-21.

Want to visit the observatory and see the sky through our astronomical equipment? Attend one of our monthly public open houses!

Free, but required, tickets are available starting at 9 a.m. on the first of each month. See the public open house page for details and times, and other program options.