Dr. Jake Newsome, author of “Pink Triangle Legacies: Coming Out in the Shadow of the Holocaust,” will present the University of Lynchburg’s 2023 Ida Wise East Memorial Lecture. The event will be held at 7:30 p.m. on Thursday, Feb. 9, in Hall Campus Center’s Memorial Ballroom.

Admission is free, the public is invited, and a book signing will follow the lecture. 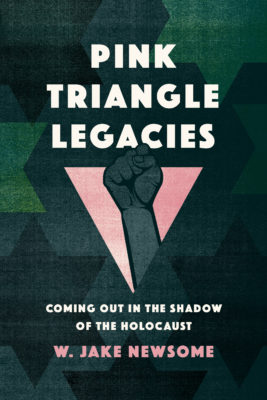 “What makes Jake’s book so important is that he highlights the unique experiences of LBGTQ+ people, both during the Holocaust and after,” Dr. Brian Crim, Lynchburg’s John Franklin East Distinguished Professor in the Humanities, said.

“LGBTQ+ [people] faced their own architecture of oppression that differed in some ways from other victim groups under the Third Reich, but for decades survivors felt pressure from their peers or governments to remain silent about their experiences.

“I wanted Lynchburg audiences to hear this story because it’s about so much more than the Holocaust, but also its complicated legacies.”

In Newsome’s book, which was listed among its “most anticipated LGBTQIA+” books of 2022 by the Lambda Literary Foundation, he explains the evolution of the pink triangle symbol.

During the 1930s and ’40s in Nazi Germany, LGBTQ+ people were forced to wear a pink triangle, its point facing downward. After World War II, LGBTQ+ people reclaimed the pink triangle — albeit sometimes an inverted, point-up version — as a positive, empowering symbol.

Still, he knew nothing about the LGBTQ+ experience during that time. “After almost four years, I realized that I hadn’t learned anything about what happened to people like me,” he said. “When I started my PhD program, I decided to research the fate of LBGTQ+ people in Nazi Germany.”

Newsome describes writing his book as a “process of both historical research and personal exploration.” It also was heart-wrenching, learning about what LGBTQ+ people went through during the Holocaust and knowing that if he’d been born in an earlier time, his fate might have been similar.

“It’s very difficult to study and grapple with this history on a daily basis,” he said. “It’s hard, reading about what these people had to go through and endure, especially knowing that as a gay man, the same would have happened to me if I had lived in Germany in the 1930s.

“Learning about this history makes me more aware of how precious it is that I live in a time that I can live openly with my husband. Because I have a personal stake in this history as a gay man, I’m committed to carrying on and documenting, preserving, and telling as many stories of my LGBTQ ancestors as possible.

“They deserve to be remembered alongside the other victims of the Holocaust.”

While researching his book, Newsome also started noticing pop culture uses of the pink triangle. The music video for Lady Gaga’s song “Born This Way” featured a pink triangle, for example, and a gay bar he visited used one as a decoration.

“So, my research question became: How could a symbol go from being a concentration camp badge to being in a pop music video and gay bar?” he said. “What happened in the 70 years in between?”

Determined to find out, Newsome’s research took him to numerous small archives in the U.S. and Germany — places where the records weren’t digitized and he had to rely on helpful archivists to find what he was looking for, if it even existed.

“None of the stories I was looking for were in well-established, governmental archives,” he said. “That’s pretty common for LGBTQ+ historical material. Instead, I relied on a number of grassroots, LGBTQ+ archives.

“In total, I visited nine archives in Germany and the United States. Almost all of these archives are small and underfunded, so none of their holdings are digitized. So, I didn’t know what I’d find until I got there.

“I was able to email with all of the archivists months in advance to tell them what I was looking for, and they let me know if they thought their archives might have something relevant.”

Unfortunately, too, all of the “openly LGBTQ+ Holocaust survivors” had died. Newsome did, however, find earlier testimonies and oral histories, and he learned from scholars, bookshop owners, and others who shared their information and stories.

“Through my conversations with them, I was able to meticulously track the exact, key moments in the history of the pink triangle as a symbol of persecution and then a rallying cry for social activism.”

While on campus, Newsome will meet with members of Lynchburg’s Gender and Sexuality Alliance, something he’s looking forward to.

“[It] will give students a chance to ask me questions about my research, the process of writing a book, my work as a public historian, and generally anything else they’re curious about,” he said. “It also gives me a chance to hear from them about what issues they’re engaged with and passionate about.

“My favorite part of my book tour has been meeting people — especially young people — and learning about what brings us all together. I hope that the students in the GSA think of me as a resource, because I’m committed to supporting their work and goals in any way I can.”

In addition to his book, Newsome has written for major publications, including The Washington Post. He’s appeared on radio, television, and numerous podcasts, including one hosted by Jonathan Van Ness, one of the “Fab 5” from the Netflix series “Queer Eye.”

Governments in the U.S., U.K., and France also have invited him to speak about LGBTQ+ history.

“I met Jake at a seminar hosted by the U.S. Holocaust Museum in Washington, D.C., when he was working on his dissertation,” Crim said. “All of us were impressed with his research and recognized immediately the impact his work would have on the field of Holocaust studies.

“I continued to follow his progress and jumped at the chance to invite him to campus when he announced the book tour for ‘Pink Triangles.’”

The Ida Wise East Memorial Lecture was established in 1979 by an endowment gift to University of Lynchburg from Margaret East Nelson of Norfolk, Virginia, in memory of her mother, Ida Wise East, and in recognition of the lifelong interest of the East and Nelson families in the humanities. Income from the funds are used to support an annual lecture, lecture series, or seminar in the humanities.