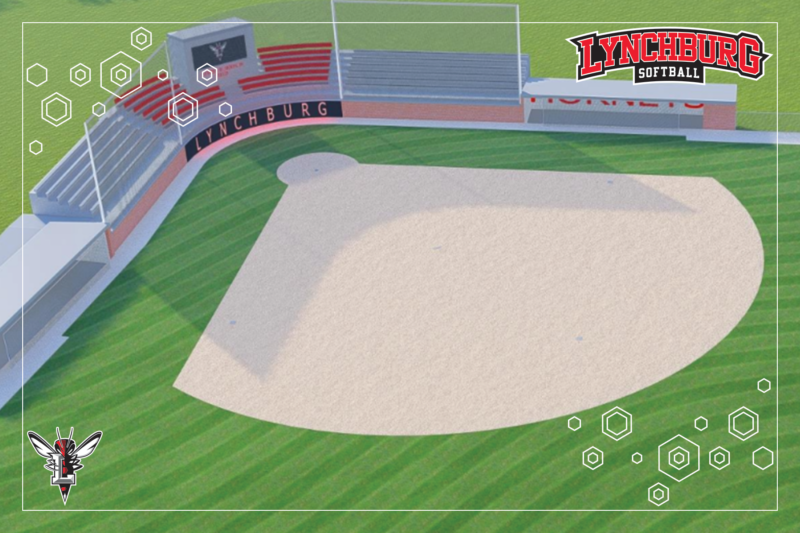 Aubrey R. Moon Jr. Field has long been one of the most scenic sites in NCAA Division III to take in an intercollegiate softball game. Now the University of Lynchburg’s historic venue is about to get even better.

Lynchburg athletics on Friday announced Phase 1 of its improvement project to the home of Hornet softball, which will include a new Daktronics scoreboard, new recessed dugouts, new backstop and netting, elevated poured concrete around the existing backstop to set the stage for an expanded seating area and press box, and concrete sidewalks from the parking areas to the new grandstand.

It’s the third step in Lynchburg’s multimillion-dollar Five for the Hive initiative, five upgrades to Lynchburg’s five home athletics facilities designed to elevate the University’s championship-level experience for student-athletes, alumni, families, and fans. Five for the Hive has been funded in part by gifts from large and small donors alike, including a $75,000 match from the Mary Morton Parsons Foundation.

“Our program has always taken special pride in how we care for Moon Field,” Head Softball Coach Dawn Simmons said. “I am so thankful for the friends, families, and alumni of the program who have stepped up and for the University administration’s support to make these improvements to our facility for our student-athletes. This is a huge step forward for our program.”

Phase 1 of the project is expected to be completed by January 2023. Phase 2 will include a raised seating area with both plastic chair back stadium seats and metal bleachers down both the first- and third-base lines, a state-of-the-art press box, fresh grading ,and field improvements (including resurfaced bullpens and a turf halo around the home-plate area).

“These long-awaited improvements to our softball venue will position our facility to match the national-caliber program that Coach Simmons and her staff have built over the past two-plus decades,” Lynchburg Director of Athletics Jon Waters said.

“The inspirational support of our alumni, families, and friends has a direct impact on our ability to provide a championship-level experience for each of our student-athletes. We are excited to get this work under way.”

Lynchburg’s softball program has enjoyed sustained success in the 24 seasons under Simmons’ tutelage. The Hornets have taken part in two of the last four NCAA tournaments and won a regional title in 2019. Lynchburg softball has six Old Dominion Athletic Conference titles in its trophy case and has reached seven NCAA Division III tournaments. Simmons, with 666 career victories, is the winningest softball coach in ODAC history.

Lynchburg’s Five for the Hive efforts continue to take shape across campus. The University installed a new Daktronics video board and gameday operations center at Shellenberger Field and the Dr. Jack M. Toms ’69 Track in the spring of 2021 and state-of-the-art, ADA-compliant molded plastic seating inside Turner Gymnasium the following summer.

The final two projects — new tennis courts and revamped seating and press box arrangements at baseball’s James C. Fox Field — remain in the works for the near future.