The popular, student-planned event — a rare opportunity for students, faculty, and staff to get dressed to the nines and literally walk the red carpet — was held in Hall Campus Center’s Memorial Ballroom. Two-hundred-twenty people from across campus and the surrounding community attended. Although tickets were free, the event was officially “sold out.” 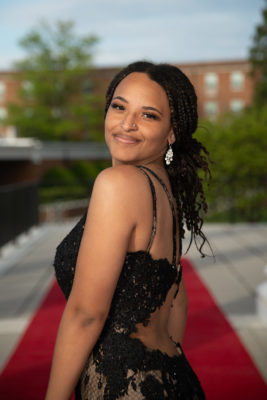 The 2022 theme was “The Legacy Continues” and the keynote speaker was Nat Marshall ’83, a member of the University’s board of trustees and its former chair.

“He has a legacy here,” said Annette Stadtherr, Lynchburg’s director of multicultural services and parents and family programs. “He’s an alum of the University. He’s a parent of the University; his daughter went here. He’s a trustee member. So, he has a long legacy here. The awards are legacy awards that go along with the values of the institution.” 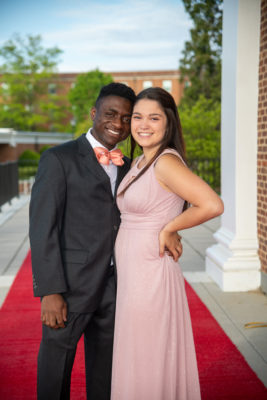 The following awards were presented at the gala:

The Leaving Your Legacy award, which honors a senior who has “exemplified excellent leadership, along with service in areas of diversity and inclusion,” was presented to Shadaya Cooper ’22.

The Altruistic Hero Award was presented to Cynthia Martinez ’23 and Nyccol Contreras ’23. It recognizes a student (or students) who “works selflessly behind the scenes with a positive attitude and willingness to help in whatever capacity necessary.”

The Always Becoming award honors a first-year student who upholds the values of the Office of Equity and Inclusion and is described as an “evolving leader” who reflects the Lynchburg vision of “always becoming.” This award was presented to Josiah Randles ’25.

The Voice of Peace and Inclusion Award honors a student, faculty, or staff member who “uses their voice to promote inclusion in their personal, professional, and/or collegiate journey.” This year’s honoree was Adrieanna Vest-Turner ’22 MPH.

Vest-Turner, graduate assistant for multicultural services and chair of the gala’s planning committee, also received the Multicultural Services Above and Beyond Award.

Claudio Otero III ’20, ’22 MEd was presented the Distinguished Diversity Leadership Award. It honors a student who is “active and committed to the mission of the University of Lynchburg, ensuring that all members of our community are treated in a fair and equitable manner.”

The recipient of the Exemplary Mentor Award was the Rev. Dr. Katrina Brooks, Lynchburg’s assistant chaplain. The award honors a faculty or staff member who “serves as a role model to the student body,” “is dedicated to empowering students to become leaders,” who encourages integrity, and is a “beacon of inspiration.”

The Community Engagement Award goes to someone whose efforts are focused on expanding “the concept of diversity and inclusion to impact the surrounding Lynchburg community.” The award was presented to Elijah Harrison, a graduate student pursuing the Master of Business Administration. 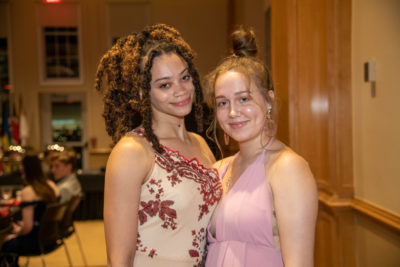 The Patience and Fortitude Award gets its name from the marble lions, Patience and Fortitude, which stand guard in front of the New York Public Library. During the Great Depression, New York’s mayor named the lions for qualities he believed his citizens needed to get through the challenging time.

This award is presented to someone who “exemplifies the ideals of Patience and Fortitude at the University of Lynchburg.” It was presented to Donzailya Berg ’23.

The Office of Equity and Inclusion Organization of the Year award is given to a campus organization that is “active in promoting diversity, equity, and inclusion; holds promise to their mission statement; and has been devoted to community service.” The award was presented to Alpha Psi Lambda.

The Helen Mundy Witt Multicultural Award, the night’s most prestigious award, was presented to Jer Bryant ’03, ’10 MA. Bryant is an assistant professor of English, Richard H. Thornton Chair, director of the Wilmer Writing Center, and the University’s interfaith chaplain.

The award is named for the late Helen Mundy Witt ’67, Lynchburg’s first Black graduate. It recognizes someone “who has enhanced the culture of inclusion on campus by promoting togetherness, diversity, and respect; created opportunities for underrepresented populations; and/or encouraged positive community between persons of different backgrounds.”

Bryant received numerous nominations for the award. In one, a student described him as “the most empathetic, caring, and sincere person I have ever met” and “the epitome of warmth and understanding.” 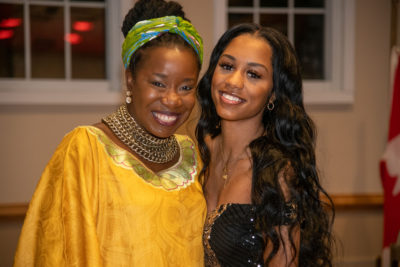 They added, “Jer reserves judgment. He frequently engages in conversations with others in order to learn more about the experiences that shape their daily lives. He avoids speaking negatively about any particular group, but holds space for those that have historically been marginalized.”

Another described him as an “amazing leader who motivates and encourages people to love themselves and do their best, whether it be in class, in the writing center, or in the spiritual life groups. He is passionate about cultural diversity and is a safe space for people of any religion, race, or creed.”

Yet another student concluded there was “no one on campus that I could recommend more to receive this award than Jer Bryant.”