The students, all of whom have a major or minor in history, are lending their research skills to Bedford Historical Society, Cloverlea Farmhouse, and Sedalia Center. All of the organizations are located in nearby Bedford County, Virginia.

“[We’re] taking the opportunity to have students do hands-on humanities work that bridges their studies and disciplines, helping the partners, with the goal of being able to present that history to a larger public,” Crutchfield, assistant professor of history, said.

Rick Smallshaw ’24, a history major with minors in medieval and renaissance studies, art history, and German, is working on the Bedford Historical Society and Cloverlea projects.

His work for the historical society involves scouring Virginia Chronicle, the Library of Virginia’s digital newspaper archives, for old issues of the Bedford Democrat and Bedford Bulletin newspapers.

More specifically, he’s looking for turn-of-the-20th-century articles about the town’s school system. “I hope to get a more precise picture of how education was conducted and viewed by Bedford’s citizens in the time period available in the newspapers,” Smallshaw, a Westover Honors Fellow from Lynchburg, Virginia, said.

One of the historical society’s goals is to tell the stories of Bedford’s early schools, particularly the segregated, African American ones. The group also plans to develop a map, in cooperation with Bedford County’s GIS system, that will show the location of each school and provide historical information.

Through his research, Smallshaw found that the creation of one school reportedly caused a stir in the late 1800s. “Something interesting I’m currently discovering more about was the ‘scandal’ of creating a Bedford High School in 1894,” he said in March.

“It caused a great division between town citizens and county citizens and between the elite and the poor of the area. It’s been very interesting to analyze the development of the story for its socioeconomic implications.”

At Cloverlea, Smallshaw and other history students are helping conserve artifacts and research the history of farmhouse — a project that has been ongoing since the fall of 2020.

Cloverlea is the former home of the Claytor family. The house — the earliest portions of which date to the late 1780s — is located at the University of Lynchburg’s Claytor Nature Center.

The property, which includes the farmhouse, hiking trails, meeting and event spaces, an astronomical observatory, and other features, was donated to the University by the late Boyd Claytor, a Bedford businessman.

Smallshaw is researching Claytor and his businesses, including Southern Flavoring Company, which still exists in Bedford. “I’m working … with some of Boyd Claytor’s former business partners to help me locate old products his businesses produced and to create a timeline of how his businesses developed,” Smallshaw said.

“I hope to locate old products … and use them as artifacts to display in the farmhouse as indicators of the diversity of his business enterprises. I also hope to create a more complete chronology of when [he] began each of his business endeavors and present this visually in the form of a chronological map or timeline.”

William Fowler ’22 also is researching Cloverlea. The environmental science major, with a minor in history, is researching the farm’s land use, ownership history, and agricultural and forest evolution.

“I’ve only looked at maps thus far, but I have also begun to search through deed documents and wills from previous owners of the property to look for clues of land use,” Fowler, of Buchanan, Virginia, said in March.

“The maps and aerial photographs only go so far back, so it’s a challenge to see forest evolution, but I’m using bits and pieces of information, including where some artifacts have been found on the property using metal detecting, to build on the land-use aspect.”

He added that he wants to “get an idea of land use at the Claytor and Cloverlea property, so we can make a story map in the future to use for educational purposes.”

Fowler said his findings, thus far, haven’t included anything “crazy,” but he has learned more about the nature center’s landscape and its namesake family. “I’ve noticed that much of the land at Claytor was cleared, with little forest on it in the early 1900s.

“If you go to Claytor now, you would never think that was the case. Looking through newspapers has also proven that multiple Claytors — possible relatives of Boyd — were prominent citizens in the late 19th and early 20th centuries.” 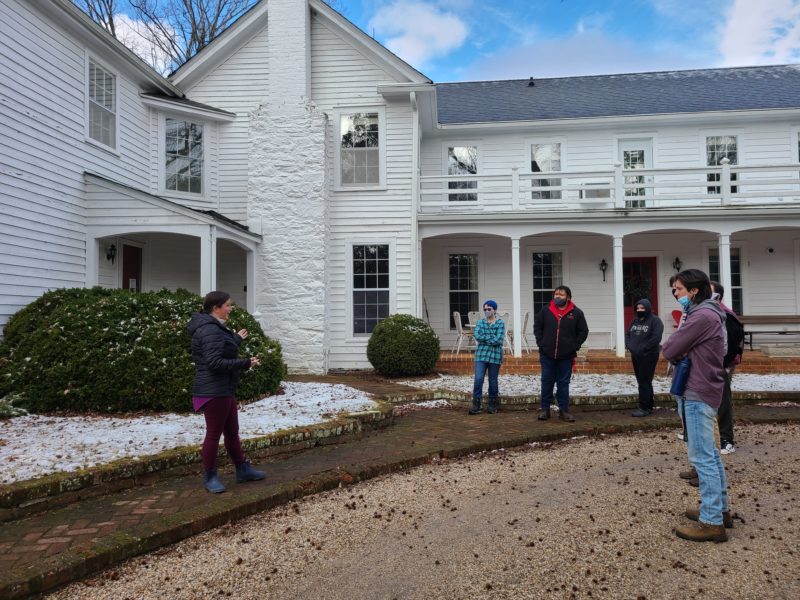 “The goal is for us to be able to share the history of the Claytor family, Cloverlea Farmhouse’s ownership history, and Claytor Nature Center’s land-use history in meaningful ways with displays and interpretive signage in the farmhouse and on the property,” Trish Cerulli, outreach coordinator at Claytor Nature Center, said.

“The students this semester will be diving deeper into the branches of the project to put that context together and begin designing some options to display the history and attic finds.”

Students in Crutchfield’s Virginia History class are helping staff at the Sedalia Center research its history. The arts and education center and events venue is housed in what was once Counter Ridge School, a segregated elementary school built in 1959 for the local Black community.

In early April, when she was just beginning her research, history major Laura Porto ’24 said she wanted to connect with people who attended the school. “I was hoping to focus my research on the people who went there,” Porto, a Westover Honors Fellow from Cape May, New Jersey, said.

Porto is seeking “primary sources” — firsthand accounts of what it was like to attend Counter Ridge School. “Whether these primary sources are word-of-mouth from individuals who attended the school, or some other form,” she said. “That is what I would like to achieve. … Putting some faces to it would certainly help. Real people with real stories to share.”

Sedalia was the first organization to approach the University about collaborating, followed by the Bedford Historical Society.

“Sedalia came to us first,” Crutchfield said. “I’m teaching a Virginia History course, so there was an automatic connection. The Virginia History class will work with them on one assignment for a portion of the class. … In the meantime, the rest of this developed. It’s an experiential learning opportunity.”

Two of the three partners — Bedford Historical Society and Sedalia Center — are new for the University. “We’re in new territory and working it out as we go along,” Crutchfield said. “I’m excited that they reached [out to] us and that we can provide help.”

Crutchfield anticipates the partnerships will go on long after the spring semester. “There certainly will be enough work,” she said. “We’re finding interesting things. My hope for it is to be a longstanding partnership.”

Smallshaw believes the research skills he’s learning will benefit him long after he graduates from Lynchburg. “I hope to work in higher education, which will allow me to do lifelong research on historical topics I’m passionate about,” he said.

“Being able to do so as an undergraduate has been very beneficial. Especially reading the newspapers, I have come to appreciate the need for very close reading and extreme thoroughness in research to gain a complete understanding of your subject matter.”

Fowler, who plans to work in the wildlife management and conservation field, agrees. “[This] project gives me another chance to showcase my research skills and it can relate to conservation of land, which I am interested in,” he said. “I have learned to be organized, thorough, and how to look for key historical context.”

He added that he’s also enjoying the work. “I have always liked history,” he said, “even as an environmental science major. It’s exciting to work on a history project that ties in some environmental aspects.”

Porto, who has a minor in law and society and plans to go to law school after graduation, believes the project will benefit her future career in the courtroom.