Black women are three times more likely to die from maternal complications in the U.S. than non-Black women, according to the Centers for Disease Control and Prevention, and the rate of those deaths has only gotten worse over the past few years.

It’s an issue that nursing major Alexandra Boatwright ’22 sought to tackle for her Westover Honors senior project. With plans to work as a labor and delivery nurse after graduating, the Fredericksburg, Virginia, native said her passion for maternal medicine and reproductive health rights fused with her investment in problems plaguing Black communities. 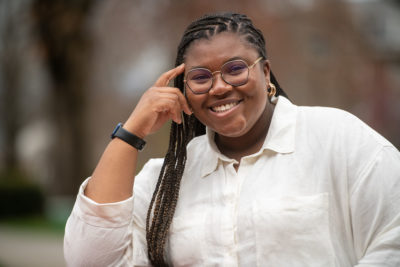 While professional organizations have recommended educational tools to raise awareness among practitioners of their own biases, there are very few out there, she said.

“I found that there’s not really a lot and I was really surprised by that, so I decided to kind of create my own,” she said.

Boatwright started with visions of a curriculum framework but, with help and guidance from the faculty committee for her project, realized that would be too big of an undertaking. She eventually settled her focus on an outline for an introductory seminar that’s based on four key elements.

Two of those elements establish a baseline understanding that everyone holds implicit biases, and that Black women have consistently spoken out about their health needs only to be ignored by practitioners. In that vein, Boatwright mentioned Serena Williams as a prominent example: after giving birth to her daughter in 2017, Williams had to vehemently advocate for herself to nurses as someone with high risk for blood clots, suffering from a pulmonary embolism that was nearly fatal.

“She’s a celebrity; you’d think with all the money and influence that she has people would listen to her, but obviously it doesn’t matter,” Boatwright said.

The other two elements involve an explainer on the history of medical advancement made at the cost of Black lives and health, such as coerced sterilization of Black women, and a shift in dialogue away from race as a biological risk factor and toward recognizing it as a social construct.

Boatwright’s research shows that long-established, systemic medical racism is to blame for the risk, not perceived biological factors embedded in the construct of “race.”

Beyond envisioning the seminar as an eye-opener for practitioners, she said a key goal is getting those practitioners to really listen to their Black patients.

With aspirations for grad school, Boatwright said she wants to dig deeper into policy and advocacy for, generally, “listening to Black women when they speak — even outside of maternal medicine.” Though she said there are existing groups conducting promising research and work on these systemic issues, there’s more to be done.

“Eventually I want to really do a lot of research in terms of how Black women are affected with different pregnancy-related issues, whether those are illnesses or even patient deaths, and how racism really is at the crux of that,” Boatwright said.

Such research could develop into the full curriculum she initially envisioned, which she could then present herself. But before that, there’s plenty of work that can be done along the way, since “small incremental change is still change and will still yield — hopefully — a positive outcome, or at least greater awareness,” she said.

Boatwright knows that her research has equipped her to offer better care for her future patients.
She said she feels prepared to enter a workforce that’s disproportionately white, having learned accounts of Black institutionalized struggles that weren’t sugar-coated, as well as the best ways to advocate for herself as a Black woman from her parents.

“I’m not nervous to break into that, knowing that I will be a minority in that. I’m really excited to actually be able to make a difference in patients’ lives — immediately as a labor and delivery nurse, but then over the lengths of time as I get more educated and am able to do more to help patients.”