On the NBC series “American Ninja Warrior,” competitors climb “salmon ladders” and cargo nets. They swing like Tarzan and negotiate impossibly tricky obstacles. The goal is to complete the course under the time limit, hit a buzzer, and advance to the next round — all without getting pitched into the water.

In a few weeks, Carrington Osborne ’24, a special education major from Forest, Virginia, will travel to San Antonio to compete on the show. It’s something she’s been dreaming about for years.

“When I was little, my dad and I used to watch ‘Sasuke,’ the Japanese version of ‘American Ninja Warrior,’” said Osborne, who’s also minoring in coaching and earning a certification in health and physical education. “We used to laugh at them falling into the muddy water and doing these crazy obstacles.”

When Osborne was in fifth grade, she and her dad discovered “American Ninja Warrior.” She was instantly hooked. “I remember my first episode was seeing Brent Steffensen complete the Ultimate Cliffhanger on stage three,” she said.

“This was the first time someone had ever completed that obstacle. I was mesmerized and thought, ‘Hey, I can do that,’ so I wanted to start training for it.”

Osborne started making her own courses, using schoolyard jungle gyms, door frames, whatever she could turn into an obstacle. In 2016, her mom surprised her with the real thing.

“[She] brought me to a ninja gym in North Carolina called Ultimate Backyard Warrior,” Osborne said. “This was my first time seeing these obstacles live and I was shocked by how big and tall they were. I tried out a few things while there and, to be honest, I sucked. But I was a total fan girl and got signatures and talked to ninjas from the show.”

From that point, Osborne’s training took off. She built her own backyard course and started training at Elite Athletics, a local gymnastics, tumbling, cheerleading, and ninja warrior gym. She started coaching there in 10th grade and was promoted to ninja director in 2021.

“I oversee all the employees under me, help design the curriculum, and coach our competition team,” she said. “I have even had one of my students compete on this past season of ‘American Ninja Warrior Junior.’” 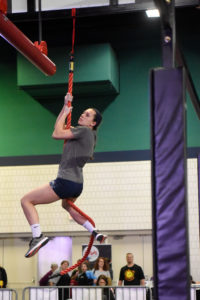 “Ninja warrior is a full body workout,” she said. “It’s … upper body, balance, and technical moves. It requires a lot of forearm and grip strength, abs, and back muscles. There are a lot of skills, like flying through the air or holding on to a one-inch ledge with just your fingertips.”

Osborne loves the freedom she feels while training and says the sport has had other benefits, as well. “I’ve gained so many positive relationships throughout this sport and a lot of self-confidence,” she said. “There is always a new challenge you can do and I’m so proud of all the progress I make each time I’m on an obstacle.”

While this will be Osborne’s first time competing on “American Ninja Warrior,” she’s no stranger to those types of events. For two seasons — 2019-20 and 2021-22 — she has competed in the National Ninja League. She missed the 2020-21 season due to injury.

Her first season, she made it all the way to the National Ninja League World Championships, but didn’t advance past the first round. “I ended up falling on stage one of the three stages,” she said. “This past season, I’ve performed a lot better and more frequently.

“I aimed to do two competitions a month and have competed in seven competitions in the past few months. I have placed in the top three in six of seven competitions. I also qualified for regionals, which will take place in late February, to see if I can make it back to Worlds.”

In December 2021, Osborne applied to compete on Season 14 of “American Ninja Warrior.” She filled out an application, which included her personal story, athletic history, and photos and videos showing off her ninja warrior skills.

She’d actually applied the year before, but was three days too young to complete. You had to be 19 at the time. “I also had not been officially cleared from a recent ACL tear, and not making it was God’s way of telling me not to push myself too hard and recover first,” she said.

“This season … there was nothing holding me back from competing. I was cleared from my ACL, was 19, and had been placing first through third in a majority of local ninja competitions.”

Not surprisingly, Osborne was at the gym when the show called. On Jan. 27, her boss ran up to her with the gym’s landline, saying her parents were on the phone and there’d been an emergency. In the end, it was a well-planned surprise and her parents were at the gym, filming with their cell phones.

“I was an emotional wreck when I received that call,” Osborne said. “Since this would be my rookie season, they actually called my parents first to tell them that I would be competing. They do this so they can record my reaction to getting my first-ever ANW call. … My parents knew this would be the perfect place for me to receive the call.”

Surrounded by her fellow ninjas, coworkers, and friends, Osborne said she burst into tears when she got the news. It was a call she’d been hoping for since fifth grade. “I received so many hugs and cheers from the people I love most,” she said. “Everyone soaked in the moment and I was in literal shock that my dream was coming true right in front of me.”

Osborne will compete on “American Ninja Warrior” sometime between March 20 and 24, with the episode airing later this spring. If it goes well in San Antonio, she will advance to the semifinals in Los Angeles in April.

After that, it’s on to “Mount Midoriyama” on the Las Vegas strip in May or June. If she makes it that far and wins it all, she’ll take home $1 million. But for now, she’s just enjoying the moment and feeling blessed.

“I want to thank my family for all their support throughout the years, my friends and co-ninjas for pushing me to my limits, and most of all God for always being there for me and giving me the strength, courage, and opportunity to live out my dreams,” she said.