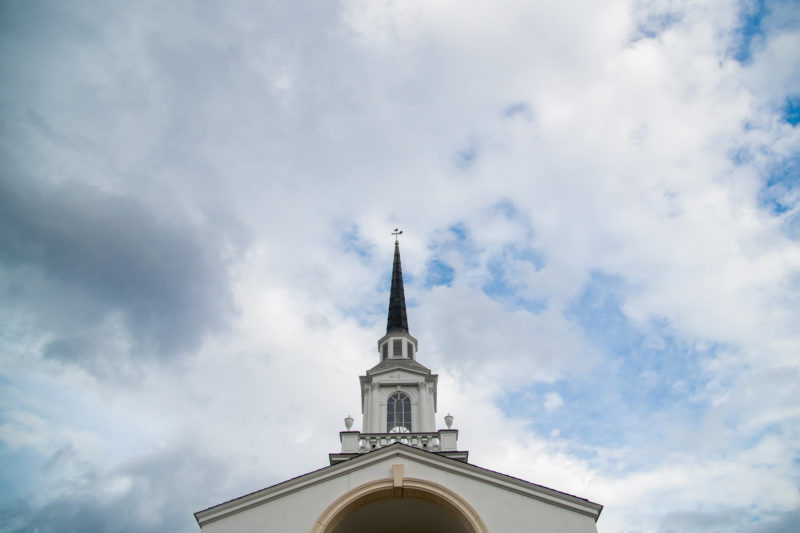 Roger Dowdy ’70 always knew Lynchburg was the school for him.

“It was the only place, but also the right place,” he said during a recent interview. “Lynchburg was just who I was.”

Growing up behind Snidow Chapel in a small apartment on Bell Street, Dowdy spent his childhood buying candy at the corner store and visiting campus often with his Euclid Christian Church youth group.

The church, once located across from E.C. Glass High School, was frequented by Lynchburg College faculty and staff. One of them was religious studies professor and youth camp director Allen Stanger ’33. When the time came for college, Dowdy’s family didn’t know how to pay the $585 a semester in tuition.

Stanger didn’t hesitate. He secured a four-year scholarship that took care of half the bill.

“We couldn’t have managed it any other way,” Dowdy said.

Half a century later, Dowdy is a retired Methodist clergyman and the founder and director of CROSS-PATHS Consulting, which provides faith, leadership, and worship training to congregations.

He’s in a much better spot financially, and he’s decided to give back. The Roger C. Dowdy and Janie Wineman Dowdy Endowment for Initiatives in Peacebuilding through Spirituality and the Arts will support a graduate assistant position in Lynchburg’s Spiritual Life Center.

Dowdy’s 40 years of peacebuilding background inform not just his own work, they’ve also shaped the scope of the endowment. He envisions a graduate assistant who will create high-quality programming that explores peacebuilding and interfaith dialogue through a variety of artistic disciplines and mediums.

As he explains in his proposal, “the arts, in their totality, ‘intersect’ with societal issues, and the expanding and changing dynamics of a ‘world culture’ — a culture no longer ‘elsewhere,’ [but] rather all around and within humanity.”

University Chaplain Nathan Albert is thrilled about the endowment.

“Working with Roger has been wonderful, and I really appreciate not only his incredible generosity, but also his deep love and passion for the University,” Albert said. “Because of how this University has impacted his personal life, he is now impacting future generations through this gift.”

The endowment is an ongoing tribute to Roger’s late wife, Janie Wineman Dowdy ’70, to the couple’s love for the arts, and to the power of Lynchburg’s liberal arts education.

“We have always been completely sold on the liberal arts,” Roger said. “You can always specialize later, but there’s just no equivalent for life, and for having a liberal arts education.”

The gift proposal makes special note of Josephus Hopwood’s founding vision for Lynchburg, and a desire that it will “continue to be honored and flourish: a community of learning which reinforces the life journey of ‘Faith and Reason’ — as represented symbolically in the real-time space of the campus Dell “intersection” — the Friendship Circle crossing.”

“We were just rooted and grounded in what was then Lynchburg College,” Roger said.

They married in 1970. After graduation, Roger landed a job at the college directing musical theater, thanks in part to Bob Hailey, who was chair of the theatre department at the time. He went on to earn a master’s degree in church music and later served as program director at Lake Junaluska near Asheville, North Carolina, where the couple bought a cabin in 2003.

Roger’s six years there inspired the central idea for the endowment. “There was a group of residents on the campus who wanted to begin a peace conference,” he recalled.

Slated to run for 10 years, it was to be an interfaith peace conference for Muslims, Christians, and Jews. Roger helped develop and guide the conference, which brought a wide range of presenters to the small mountain community. They spoke on topics such as “Children and Peace,” “Ecology and Peace,” or “Hunger and Peace.”

The last conference in 2019 focused on “The Arts of Peace.”

“It was just transformative,” Roger said. “It was all about how the arts can be instruments in peacebuilding.”

There are differences between “peacebuilding,” “peacemaking,” and “peacekeeping.” While the latter two describe stages of crisis management, peacebuilding is defined as a conflict transformation process that ensures lasting peace.

“It’s something we have to work towards and it’s always unfolding,” he explained. “And it’s a building process — it has to have a foundation, building blocks, and the components which make the structure secure. So that’s why I’m using the word peacebuilding as opposed to peacemaking or peacekeeping.”

Roger’s yearlong work preparing for the conference and his wife’s death in December 2019 inspired his idea for an endowment that would help build bridges and create conversations on campus.

“When [Janie] died, I had to take over [our finances] and realized we were really in a very good place, financially. And I just thought it was time to do something lasting, something that could impact lives [but also] reflect our lives at the college,” he said.

“Particularly in this strange era, where peacebuilding is just so central to us moving forward as a people. And I mean that in the U.S., but also certainly globally. We’re all connected and if we don’t live peacefully, we simply cannot thrive.”

Along with the start of the COVID-19 pandemic, another thing happened: President Dr. Alison Morrison-Shetlar arrived at Lynchburg.

“There was a Zoom of some type every week. And if you talk about a lifesaver and a connection, that was just huge, to become totally reconnected every week with the University, and with her and Bob,” he said.

“To hear her talk about her vision, and what have become now the three pillars, it just reinvigorated my spirit and connection to the University.”

Roger believes that peacebuilding will fit in nicely with the president’s Diversity, Equity, and Inclusion pillar, and he can’t wait to see what the future graduate assistant does, whoever it may be.

What he does know is that there are plenty of artists working on peacebuilding projects, and he hopes to see them on campus — not just for an art show, reading, or concert, but for conversations that will cross over disciplines and bring people together.

Visit lynchburg.edu/give to make a difference in the life of a University of Lynchburg student, program, or special initiative.