Dr. John Eric Goff, the University of Lynchburg’s go-to guy when it comes to sports physics, has been making the rounds in the media recently, talking and writing about the 2022 Winter Olympics, which are currently underway in Beijing. 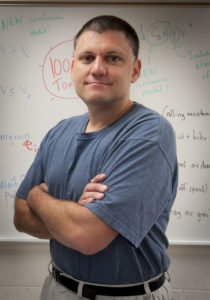 Goff, a physics professor at Lynchburg and the author of “Gold Medal Physics: The Science of Sports,” was interviewed for the February issue of Scholastic’s SuperScience, a kids’ magazine. In the article “Up in the Air,” he compares Olympic ski jumpers to flying squirrels — they look like they’re flying, he told the magazine, but they’re actually gliding.

He talked about the same phenomenon — and other factors that have advanced the science of ski jumping — in a Cheddar News video.

He also was interviewed about the winter biathlon for Popular Mechanics magazine.

An article written by Goff, “The high-speed physics of how bobsled, luge and skeleton send humans hurtling faster than a car on the highway,” appears on The Conversation, a nonprofit, independent news site. It was later picked up by NBC, The Scientific American, PBS, and many others.

Goff is frequently interviewed by the media during major sporting events, including past Olympics, the Tour de France, and soccer’s FIFA World Cup. He has also been interviewed about the physics of baseball, basketball, football, and other sports, and is a regular guest on “Playing with Science,” a podcast on world-famous astrophysicist Neil deGrasse Tyson’s StarTalk radio network.