Sometimes, finding your purpose takes a deeper dive than you imagined it would.

When Missy O’Hara ’10 graduated from Lynchburg, the communication studies major had a dream: Be the next Hannah Storm from ESPN’s SportsCenter.

By 2014, she was well on her way, working as a marketing coordinator for the Washington Redskins, which became the Washington Football Team and was recently renamed the Commanders. But after three years in D.C., she never fully realized her on-air dreams. Instead, she had an epiphany and her dream took a detour.

“That glamourous sports industry idea started to fizzle out and I recognized that I was really good at marketing instead,” O’Hara said.

In 2022, she landed her dream job when she was named the national manager of dive sales. 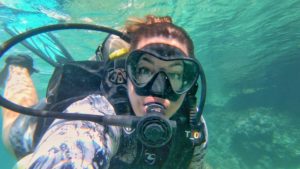 A scuba diving enthusiast since 2010, O’Hara had been wondering if she could combine her love for diving with her job promoting the Caribbean resorts. Up to that point diving had been a hobby, albeit a serious one. She would dive on vacations and in her off-time while working at the resorts.

“I’d take my GoPro and share photos and videos on social media with my territory travel advisors because it brought me joy, and so they could use it to promote their business and reach new potential clientele,” she said.

O’Hara, who is based in North Carolina, talked with a team member who had given dive presentations for the company. She also started posting underwater photos from her dives on social media and “making sure my passion was heard/seen by the corporate office.”

As O’Hara told communication studies professor Dr. Mike Robinson recently, she “began really looking for an opportunity to create a business model … to increase our dive marketing,” and that she envisioned the position as “director of dive sales.”

It wasn’t long before she became known as the Southeast sales team’s “unofficial dive guru.” At the same time, she was also getting noticed by the corporate office for her sales expertise and winning awards for her outstanding work. Whenever she got an opening, she talked with company higher ups about how she wanted to create a position that promoted diving at the resorts.

All the while, she put to practice what she learned at Lynchburg. “I use the skills I learned in the courses at Lynchburg almost every single day,” she said. “I relied heavily on my interpersonal communications lessons, public speaking classes, marketing classes, and public relations courses.”

Robinson was glad he could help. “It’s great to be able to help a student,” Robinson, chair of the communication studies department, said. “Missy was always highly motivated. She was excited about everything. Those traits really helped her in her career building.” 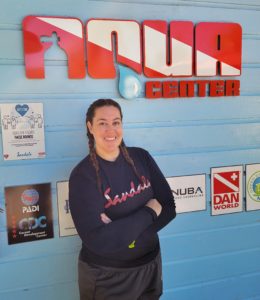 In August 2021, O’Hara was invited to a social media meeting in Curacao, site of a new resort. The meeting gave her another opportunity to talk with company executives who could bring her big idea to fruition.

“I made sure, through the years, that I respectfully voiced my career goals to not only my direct boss, but also the executive team, and they had been open and supportive each time,” she said. “That support and open communication meant the conversation flowed naturally and I had a good rapport with the corporate executives.

“I had made my passion and expectations known, but also kept my head down and kept doing the job at hand. I had already created and hosted training webinars … through 2020 quarantine and continued to promote dive by educating the team and partners by posting my own personal experiences.

“It was never anything I was asked to do or tasked with by my boss. It was something that brought me joy and I wanted to share that opportunity with everyone I could. After that Curacao meeting, the VP asked me to submit my official business plan of what a position of this caliber would look like, and I had to dig back through the archive of my college marketing notes and lessons!”

O’Hara’s hard work and persistence paid off in January 2022, when she was named national manager of dive sales. “This is definitely a dream job,” she said. “It wasn’t the original dream I imagined, but being able to create a career out of a passion is an incredibly humbling experience.

“The idea of ‘My personal passion and continued success made enough noise to make a billion-dollar company listen’ is more than I could have ever thought.”

O’Hara also credits her professors at Lynchburg — specifically Robinson, Dr. Jimmy Roux, and retired professor Dr. Cheryl Jorgensen-Earp — for sharing their knowledge and for being there when she needed them.

“I had so much support from Dr. Mike [Robinson] and the rest of the communications department that it allowed me to dream further,” she said. “From connections available through the College, I was able to secure an internship at WSET news, which then put me in line for a summer internship at CBS Sports in New York City, which turned into an after-graduation internship with a minor league baseball team, and on to the Washington Football Team.”

She added, “The most important thing I’ve taken from my time at Lynchburg and after graduation is that you can’t replace or take for granted those relationships with your mentors. I don’t know of any other college or university whose academic advisor or professors still keep track and keep in touch with their students.

“It’s an incredibly special bond that Lynchburg has that I will always be grateful for.”