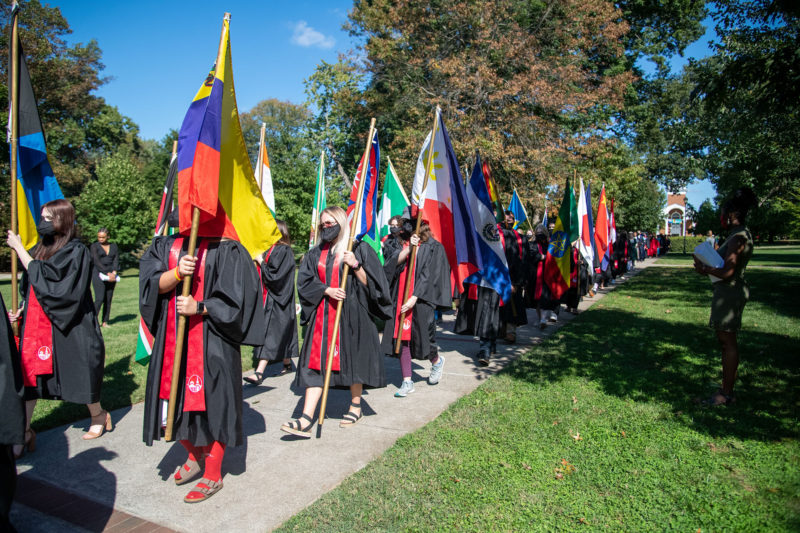 Bagpipes and drums echoed across the sunlit Dell as the University of Lynchburg finally inaugurated its 11th president on Friday afternoon. The event capped off a week of activities and was followed by a carnival with music, food, and games.

It has been more than one year since Dr. Alison Morrison-Shetlar took office, and nearly two years since the initial announcement of her presidency. Friday’s ceremony, which was postponed due to the COVID-19 pandemic, took place outside on the steps of Hopwood Hall.

The University of Lynchburg Wind Symphony and Orchestra, led by Dr. Oeida Hatcher, teamed up with the Albemarle Pipes & Drums to perform a fittingly Scottish theme for the Scottish-born president. Student marshals led the platform party, faculty, the University of Lynchburg Concert Choir and Dance Works Ensemble underneath a canopy of trees toward the stage. The choir carried the international flags.

After University Chaplain Nathan Albert delivered the invocation, Chair of the Board Robert Lemon Jr. ’98 MBA installed Morrison-Shetlar as the University’s 11th president.

The newly inaugurated president began by thanking a long list of people, including the board of trustees, faculty and staff, her aunt and sister — who were watching the livestream from the UK — her husband and “First Gentleman” Dr. Bob Shetlar, her mother-in-law, and the students.

“I know what you’re thinking,” Morrison-Shetlar said. “‘That’s a long list of people to thank. When is she going to get on with it?’ All of the people I just spoke of make this place what it is today. A loving, living, learning community — a family, yes, really.

“One that is unmatched in its dedication to the passion and purpose of our students and prepares them to leave this place each spring and go on to change the world around them. I cannot begin to tell you how thrilled I am to be here.”

An inauguration, she added, like a commencement, is a big moment in the life of a university — a beginning. “It’s the day the trustees officially charge me with leading this great University,” she said.

“But today is so much more. It’s about how we reimagine the University of Lynchburg together. How we build upon the history of this place that Josephus and Sarah Hopwood and a handful of supporters founded 118 years ago.”

While the University’s roots and values remain unchanged, Morrison-Shetlar added, a willingness to embrace change and grow has always been part of its DNA.

“The mission and the values of this University stay strong even as the world changes,” she said. “That Lynchburg education has been preparing generations of students to be successful and embrace change.”

As the world around it changes, the University must change with it, she added — and reimagine itself.

“We must build upon our strengths, our core values, and our liberal arts foundation and look upon our challenges as opportunities. We must be nimble, courageous, strategic, and innovative, in and out of the classroom.” 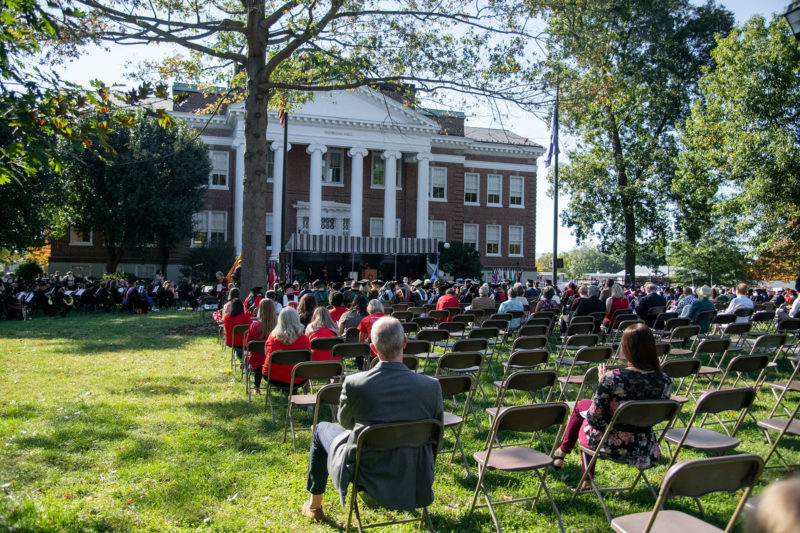 The COVID-19 pandemic, while devastating in many ways, challenged faculty, staff, and students to put all those skills to the test — successfully. Thanks to everyone’s efforts, Morrison-Shetlar said, the University of Lynchburg is among the safest campuses in Virginia.

Recent projects, most notably the University’s Lynchburg Tomorrow initiative with the city of Lynchburg, put many of the institution’s intrinsic values — or pillars — the president has been talking about since she arrived into practice. Those pillars — diversity, equity, and inclusion; leadership development; and innovation and collaboration — have turned into task forces and on-the-ground initiatives with city organizations.

Both geographically and intellectually, the University of Lynchburg is perfectly suited to call itself “Lynchburg’s university,” Morrison-Shetlar said.

From its carbon-neutral status to innovations in classrooms, dining services, and other areas, “innovation is evident in every corner of this campus,” she said. “It is exciting that so many people are looking for so many ways to improve the lives of others.”

On and off campus, the president has been working with faculty, staff, and students to address concerns and make improvements related to the three pillars.

“We have made great advances in the areas of equity, diversity, inclusion, and social justice,” she said. “Still, our journey to be an institution of inclusive excellence continues.”

The same goes for leadership development, she added. “Leadership development remains at the center of the Lynchburg student experience. Leadership must become a central focus for our personal and professional development as staff and faculty. I am committed to creating opportunities for all to advance in their careers and avocations.”

Lynchburg’s new strategic plan is guided by a collective vision, Morrison-Shetlar said: “To empower a community of diverse and innovative leaders through academic excellence for the greater good.”

She reminded the campus community to share their ideas and promised transparency and accountability in return. “Continue to challenge me as I now challenge you,” she said.

“We must be ready to change, use technology well and wisely, and identify and break down the barriers to the success of our students, University, and community.”

Rainey commended the president for causing “good trouble” and vowed the alumni would stand with her. Dolan joked that Morrison-Shetlar probably felt “right at home” among the city’s growing number of round-abouts and added that the two-lane traffic circle that is being built outside the University’s entrance was just for her.

The Wind Symphony and Orchestra, along with James H. Robertson ’99, ’90 MEd on the bagpipe, wrapped up the ceremony with “Amazing Grace.”

On the other side of the Dell, a carnival of fish and chips, Kona ice, games, and music awaited Inauguration attendees, along with special T-Shirts featuring the official University tartan.

As part of Inauguration Week — which also included a tea party for faculty and staff on Tuesday and Thursday morning coffee and doughnuts — students had participated in a tartan design contest. On Wednesday, the University announced the winners, whose design was incorporated into the celebratory T-shirt. The president and her family — husband Bob and dog Molly — were presented with special gifts, including the first yard of the fabric, a bowtie, and a doggie bandana.

You can watch the full ceremony here.