Jorgensen-Earp received the award along with her co-author, husband, and Roanoke College biology professor, Darwin D. Jorgensen, for their article “‘To Fly Under Borrowed Colours’: Insulin Discovery Accounts, Scientific Credit, and the Nobel Prize.” The piece was published in Rhetoric and Public Affairs in 2020. 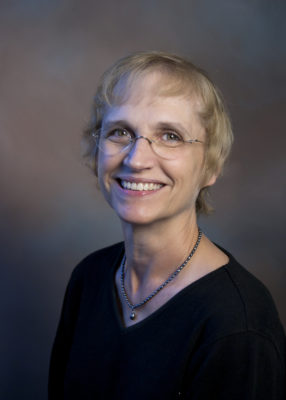 Recipients will be honored during the NCA’s 107th Annual Convention on Nov. 20 at the Washington State Convention Center in Seattle. The event will also be livestreamed.

“Dar and I are very excited because the Golden Anniversary Monograph Award is not something I ever thought I would receive,” Jorgensen-Earp said, adding that she completely missed advance notification of the award and almost missed the official announcement, too.

“A general email was sent to all members of the NCA that announced the winners of this year’s national awards,” she explained. “I clicked on the list of winners out of simple curiosity. … It’s a shame there isn’t a photograph of my face as I sat staring at the screen.

“After it registered that we had won an award I never dreamed of receiving, my first impulse was to call Dar. However, he was teaching one of his biology classes at Roanoke College, and I couldn’t reach him — which left me to pace around in bottled-up excitement.

“Once I could share the news, we couldn’t figure out why we were not contacted in advance. Then it dawned on me to check the spam filter for my email, and there were the advance notifications.”

So, the award winners learned of their win at the same time as friends and colleagues.

“Imagine if I had not clicked on the list of award winners,” she said. “I would have been receiving messages of congratulations and wondering, ‘Congratulations for what?’”

It’s not the first prize for the couple or the paper — the essay’s original version received the Wrage-Baskerville Award in 2019.

Jorgensen-Earp and her husband began conducting studies on the rhetoric of science several years ago.

“The general area of communication of science is particularly strong right now, as science and health organizations are becoming more aware of the importance of various aspects of communication,” Jorgensen-Earp said. “Whenever we attend biology conventions, I am struck by the number of panels that deal with communication in some form.”

However, she added, scientists often don’t acknowledge the extent of scholarship in communications.

“Many scientists view communication studies as a recent and ‘soft’ field with little theoretical substance or rigor,” she said. “Little do they know that the study of communication dates back to the rhetorical theories of the ancient Greeks, and that our discipline has a wealth of knowledge to provide to science and health professionals.”

Her husband, of course, is an exception, Jorgensen-Earp said, adding that both are drawn to rhetoric of science.

“Generally, we examine the way scientists seek credit for major discoveries, particularly when the Nobel Prize is at stake,” she said. “The credit for the discovery of insulin was extremely contentious and was a rhetorical battle waged on many fronts and for many years after the awarding of the Nobel Prize.”According to Jorgensen-Earp, many people will name Frederick Banting and Charles Best when asked who discovered insulin. But it was actually Banting and J.J.R. MacLeod who received the Nobel Prize, while Charles Best and the biochemist James Collip — the fourth member of the insulin discovery group — didn’t.

“Only three people could have won the Nobel, and the exclusion of Charles Best has been considered an important oversight,” Jorgensen-Earp explained.

In the article, Jorgensen-Earp and her husband explore a few things: how other scientists assigned credit for insulin and the “subtle lobbying for credit” that went on behind the scenes. Why, for example, were Banting and MacLeod nominated, but Best and Collip weren’t?

“We became interested in the informal self-narratives of discovery that were put forward by the scientists involved in the discovery and that were directed to other scientists,” Jorgensen-Earp said.

These informal stories, she added, are different from the formal accounts of discovery found in scientific articles, as well as the popularized stories directed toward the public at large. They also happen mostly in interpersonal settings.

“It’s very difficult to find these informal stories, simply because they often occur interpersonally and behind the scenes,” she added. “We hope to follow up on this research in the future.”

Jorgensen-Earp, who has been a professor at Lynchburg for nearly 30 years, finds it especially appropriate that she would win such an award not in her primary research area — British women’s suffrage — but for a rhetoric of science article.

“In an interesting way, it mirrors the experience I have had in watching the University of Lynchburg grow and develop into such a strong school in the sciences and medicine, while not losing its strengths in the social sciences, humanities, and arts,” she said.

“I can still remember when I first set foot on campus to be interviewed for a position in the communication studies department. I walked onto campus at Friendship Circle, looked around, and thought with satisfaction, ‘Yes. This could be my home for the rest of my academic career!’”

That welcoming feeling only grew, Jorgensen-Earp added, as she met faculty and students and walked through the library, one of her favorite buildings on campus. “I felt completely at home, and eager to work with the undergraduates I met.”

Her initial assignment included teaching Lynchburg’s capstone theory course and developing the senior thesis requirement. “I cannot tell you how gratifying that task has been and how successful our majors have been in conducting research,” Jorgensen-Earp said. “Over the years, many students have presented their senior thesis papers at prestigious undergraduate honors conferences and at other major conferences in the discipline.”

Today, the communication studies department is no longer located on the edge of campus, as it once was, but in Schewel Hall. The former college has become a University with several graduate programs. But some things haven’t changed, and Jorgensen-Earp hopes they never will.

“We still have the opportunity as faculty to be close to our students, and the emphasis remains on quality teaching and mentorship,” she said. “I often hear from our alums just how grateful they are for their experience at Lynchburg, and I’m always impressed with how they turn their communication major toward wonderful careers.

“But faculty here can also find support for the research that, I believe, keeps professors engaged and up to date in their field, and which fuels excellent teaching. Every book or article I’ve published was made possible because the University helped to fund the research. We never need to choose teaching or research; we are always free to emphasize teaching and research!”

Jorgensen-Earp received her BA in communication and dramatic arts from the University of North Carolina at Chapel Hill and her MA and PhD in communication from the University of Washington. She is the author of numerous articles, book chapters, and four books, most recently “Discourse and Defiance Under Nazi Occupation, Guernsey, Channel Islands, 1940-1945,” published in 2013 by Michigan State University Press. In 2001, she was named Virginia Professor of the Year by the Carnegie Foundation for the Advancement of Teaching and the Council for the Advancement and Support of Education.