When Richard H. Thornton Chair Jer Bryant was looking for nominations for this year’s Thornton Reading series, Dr. Cheryl Coleman knew immediately who she’d like to see on the lineup: Margaret Renkl.

“Renkl was the first author who came to my mind,” Coleman, an English professor and associate dean of the School of Humanities, said. “I believed she would have wide appeal, not only to our students in Creative Nonfiction and Nature Writing courses … but to individuals in our environmental science, sustainability studies, and communications programs.”

Renkl, a contributing opinion writer for The New York Times, will read from her essay collection, “Late Migrations: A Natural History of Love and Loss,” on Thursday, Sept. 21. The virtual reading, the second event in the 2021-22 Turner Reading series, is open only to members of the University of Lynchburg community.

As part of her virtual visit, she also will meet with Creative Nonfiction students.

Coleman first became aware of Renkl after her partner heard a review of “Late Migrations” on NPR and told her about it. She bought the book and was almost instantly hooked.

“I read the first two essays, and I’ve been a devout Renkl fan ever since,” Coleman said. “I’ll add that I think the illustrations by her brother, Billy Renkl, alone are worth the cost of the book. It’s also a visually appealing book.”

“Late Migrations,” published in 2019, has been described as “an unusual, captivating portrait of a family — and of the cycles of joy and grief that inscribe human lives within the natural world.”

Among numerous other honors, it has been named a Barnes & Noble Nonfiction Monthly Pick, a BuzzFeed Best New Paperback, an O, the Oprah Magazine pick, and a Southern Book Prize finalist. 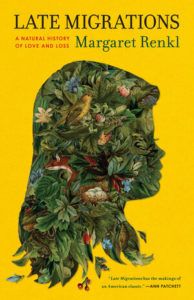 Coleman said she found the essays “perfect pandemic reading when I needed something that didn’t require a lot of concentration and … what I consider comfort reading, even though some are about loss and grief.

“I’ve given more copies of ‘Late Migrations’ as gifts than any other book, especially when people told me during the pandemic that they couldn’t sustain interest in reading anymore.”

Renkl’s second book, “Graceland, At Last: Notes on Hope and Heartache From the American South,” will be released this month. It’s a collection of more than 60 of her essays from The New York Times, which have been described as a “weekly dose of natural beauty, human decency, and persistent hope from her home in Nashville.”

Referring to the NYT essays, Coleman said Renkl is a “gentle and wise teacher” who “doesn’t hold back from telling us hard truths.”

Each semester, the Richard H. Thornton Endowment brings established writers to Lynchburg. These novelists, poets, playwrights, journalists, essayists, and other writers do a public reading or lecture, and oftentimes meet with students for classes or workshops.