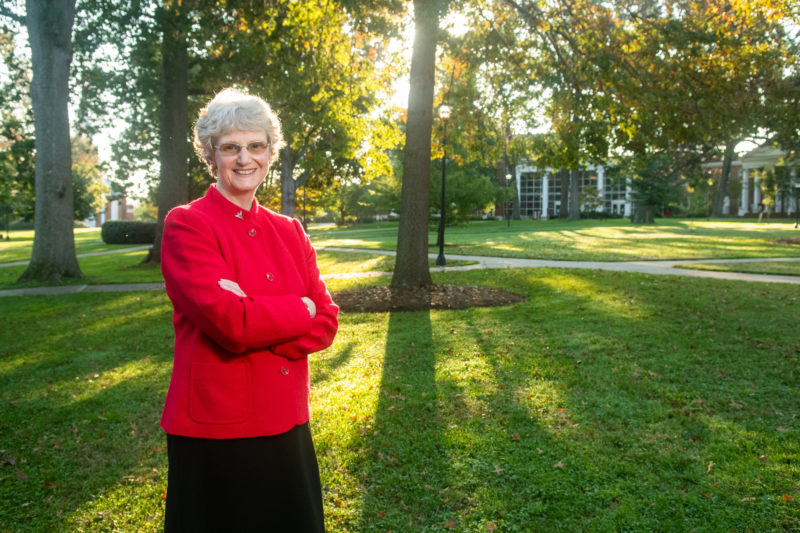 The University of Lynchburg will inaugurate its 11th president, Dr. Alison Morrison-Shetlar, at 3 p.m. Friday, Oct. 1, on the steps of Hopwood Hall. The ceremony, which also will be livestreamed, will be followed by a carnival on the Dell that includes food trucks, games, and music.

“The president wanted her Inauguration to be all about the students, and she wanted it to be one big party with fun things to do,” said Dr. Mike Bonnette, vice president for advancement, who is spearheading the planning committee. “After all, the students are why we are all here.”

Friday’s events round off a week of activities that include athletics, spiritual gatherings, socials, and service opportunities.

Morrison-Shetlar, a biologist and native of Scotland, came to Lynchburg from Western Carolina University, where she most recently served as provost and interim chancellor. She began her tenure as president of the University of Lynchburg on Aug. 1, 2020. The COVID-19 pandemic delayed original plans for a Spring 2021 Inauguration, but it didn’t stop the president from pressing on with a number of projects.

Building on her three pillars — leadership development; diversity, equity, and inclusion; and innovation and collaboration — Morrison-Shetlar reached out to community partners to form Lynchburg Tomorrow. The initiative supports the city’s strategic plan by training community leaders, raising funds to combat food insecurity, partnering on health care, and offering faculty expertise and other resources.

The president’s focus on servant leadership became clear with her involvement in the University’s Sewcial Hornets project even before she officially started at Lynchburg, and it continued on day one, when she volunteered at an event downtown. It’s part of the reason Inauguration week will include several service events.

Service has long been an integral part of the University’s fabric. In keeping with this, Cindy Ferguson, who heads up the Center for Community Engagement and was a big part of Sewcial Hornets, is leading a weeklong canned food drive competition between student clubs, organizations, and athletic teams beginning Tuesday, Sept. 28, and ending Saturday, Oct. 2.

Inauguration week officially kicks off on Sunday, Sept. 26, with an afternoon prayer service with local churches in Snidow Chapel. On Tuesday afternoon, faculty and staff are invited to “Tea, Toasts, and Tartans” on the Koudelka Balcony.

On Wednesday, Sept. 29, the campus community will gather in the lobby of Schewel Hall for the unveiling of the Lynchburg Tartan — the result of a student design competition and a fun tie-in with the president’s roots.

On Thursday morning, students are invited to breakfast with the president, her husband — “first gentleman” Bob — and “first dog” Molly before the official ceremony and carnival on Friday.

A full schedule of events and more details can be found on the Inauguration website.