/ News / ‘Risk for what you want’: New Hornets celebrate Convocation

Turner Gymnasium was brimming with excitement on Sunday afternoon as faculty lined the entrance inside to welcome new students to the University of Lynchburg. Outside, scents of candy and bubble gum floated through the hot August air as the Class of 2025, most wearing their black class T-shirts, waited to get in.

The first cheers and claps erupted when longtime University photographer John McCormick walked through the doors. A few minutes later, it was time for the ceremony, with music by the Wind Symphony and Orchestra. Led by President Dr. Alison Morrison-Shetlar and the stage party, and cheered on by faculty, new students marched into the brightly lit gym.

Normally held on the Dell and last year livestreamed from Snidow Chapel, convocation was moved to Turner this year due to the anticipated heat.

In her welcome, Morrison-Shetlar presented the new students with a red key, a new tradition she started last year. Each of them received a key along with a red journal that was placed on their chairs.

“Convocation signifies the beginning of a new chapter in your life of learning, and I hope that my remarks this morning, and those of others here, will open the first of many doors for you all. I hope that today, we begin to inspire you to turn your passion into purpose,” she said.

“The key to your success comes from this day forward and demands that you leave your own footprint on this University.”

Morrison-Shetlar went on to name eight “key things to open doors and create opportunities,” such as asking questions, working hard, accepting responsibility, listening, and leading by helping others succeed.

“To listen is to be open to different perspectives and ideas,” she said. “Be the leader who learns from others.” 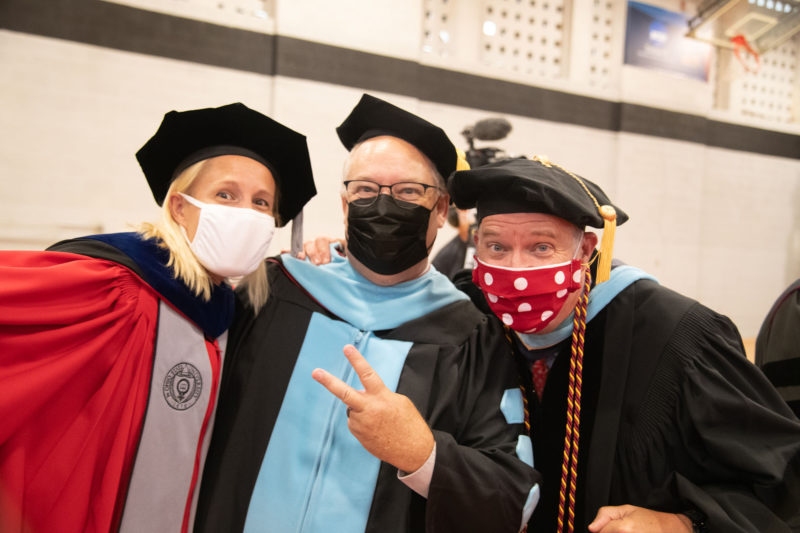 Provost Dr. Allison Jablonski introduced this year’s speaker, Professor of English Dr. Robin Bates. Bates, who has been a part of Lynchburg’s English department since 2008, is the recipient the 2021 Shirley E. Rosser Award for Excellence in Teaching.

Bates spoke to the new Hornets about adapting to life in times of uncertainty, using the idea of the goddess Fortuna turning fortune’s wheel at her whim — and how that idea of opposites is deployed in Shakespeare.

Life can change in an instant, but the point of living through dark times is that we learn to appreciate the good times, she said. We also learn from those dark and uncertain times, she added.

“Learning is messy. It is wildly inefficient. Discovery requires risk — it is more than just logic and reason. It’s faith to venture forward into the unknown,” Bates said.

And while faith and reason seem like opposites, she added, the University of Lynchburg seal illustrates that they can coexist. Hopwood Hall on one side of the Dell represents reason, Bates explained, while Snidow Chapel on the other side represents faith. “It is in the working space between and with them that we learn,” she said.

Bates also told  the students she wanted to give them “permission to fail — just a little.” After all, she added, “part of learning and thriving in uncertainty is accepting the risk of not doing things right.

“Risk is scary,” she admitted. “But it’s also where we grow the most.”

“Risk for what you want, risk for learning, risk for the life that will bring you joy,” Bates said. “If you don’t know what you want yet, that’s fine. You know what we’re really good at here? Helping students find their path.

“Once you do know what you want, once you know it, go after it like it’s water and you’re on fire. Even if it means you turn out to be Fortune’s Fool.”

With that charge, Jablonski inducted the new students.

In his welcome, Student Government Association President Matthew Gillett ’22 picked up on Morrison-Shetlar’s theme of challenging the new Hornets to leave their mark on the University. “Getting involved was the best decision I ever made,” he said.

Praising the Class of 2025 for their remarkable flexibility and perseverance during a pandemic senior year, he urged them to stay vigilant and follow the guidance of local and state health officials, as well as the University’s COVID-19 Task Force.

Kool & The Gang’s “Celebration” accompanied the students as Gillett led them through the gym and up the hill toward Hopwood Hall, where an outdoor carnival of bouncy houses, mini golf, and Kona Ice greeted the newly inducted Hornets. Morrison-Shetlar and her husband, “first gentleman” Dr. Bob Shetlar, later joined them there to celebrate the culmination of Hornet Days.