“The Vow from Hiroshima,” a 2019 documentary that tells the story of Setsuko Nakamura Thurlow ’55 and her lifelong effort to abolish nuclear weapons, will be screened online at 7 p.m. Sunday, Aug. 8. The online event is the Canadian premiere of the 90-minute film. After the movie, there will be a 30-minute conversation with Thurlow, the filmmakers, and anti-nuclear activists.

The documentary has been described as an “intimate portrait” of Thurlow, who was 13 years old in 1945 when the U.S. dropped an atomic bomb on her hometown of Hiroshima, Japan. 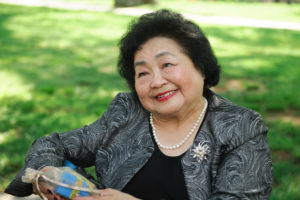 Speaking to University of Lynchburg graduates in 2018, she recalled that she saw a “bluish-white” flash outside the window of her school and then the schoolhouse crumbled, trapping her inside. While most of her classmates burned to death in the blast, she survived.

Thurlow later attended Lynchburg College, where she majored in sociology. She spent much of her adult life advocating for nuclear disarmament. In 2017, she accepted the Nobel Peace Prize on behalf of the International Campaign to Abolish Nuclear Weapons.

According to ICAN, Thurlow “was instrumental in the creation of the landmark Treaty of the Prohibition of Nuclear Weapons, adopted [by the United Nations] in July 2017 with the support of 122 nations.

“For decades, she has warned governments that inaction is not an option: nuclear weapons must be totally eliminated if we are to ensure that no other city ever suffers the same fate as hers.”

More details about the movie and how to watch it can be found here.