Tim Wilhelm ’18 MEd was named one of the Lynchburg area’s “Top Teachers” by Lynchburg Living magazine.

An article, which appeared in the magazine’s May/April edition, featured 10 area teachers. Wilhelm, an associate professor of radiography at Central Virginia Community College, was the only honoree who teaches at a college or university. 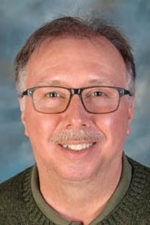 Wilhelm, who has a Master of Education in science education from the University of Lynchburg, told the magazine that he became a teacher “unintentionally, actually,” and that he didn’t even start his career as a radiologic technologist until after the age of 40.

When he heard CVCC was hiring a radiologic science teacher and clinical instructor for its Radiologic Technology Program, he applied. “I had never considered teaching, but I applied and, to my surprise, got the job,” he said. “Fifteen years later, I have never had a bad day with my students and have loved every minute.”

Asked about his “top memories of teaching,” Wilhelm told the magazine, they have been when “I am in the clinical setting with my students and they take their very first or very last X-ray with me, and when I am present when one of my students gets a hug from one of their patients.”

According to the magazine, one of Wilhelm’s former students described him as someone who “teaches with such passion and cares so much for his students. He goes above and beyond and never leaves a student behind.”

Dr. David Perault, director of the MEd in science education program at Lynchburg, had Wilhelm in two classes, Practical Meteorology and Functional Oceanography. “Tim brought an industry background to these classes, having worked as a radiologic technologist in the health arena,” he said.

“You could tell how inquisitive he was, and that he had a desire to learn new things. He brought a fresh perspective to the classroom, and all the students as well as myself enjoyed his presence there.”