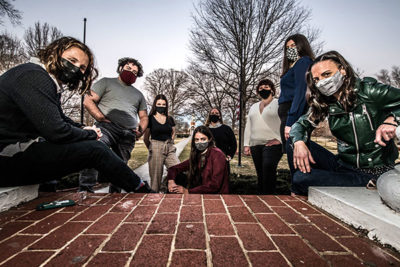 For the University of Lynchburg Ethics Bowl team, attending a national competition is not just about winning, but also working together as a team.

Over the past weekend, the Ethics Bowl team attended the virtual Association for Practical and Professional Ethics (APPE) National Competition and won two rounds against the University of North Florida and Carleton College.

For Becca Owens ’23, a special education major from Fairfax, Virginia, the final round for the University of Lynchburg against Carleton College was the most exhilarating of the competition.

“The team we were competing against had great sportsmanship, our arguments were solid, and the judges were wonderful. Winning the round itself was amazing, and ending the weekend on a win was the icing on top of the cake,” she said.

The tournament was a debate-style competition with many rounds where students presented their cases and ethical arguments. It was set up in a bracket system where entire teams compete against each other, narrowing down to quarterfinals, semifinals, then a final round between the top two teams.

During one round, Owens said they argued a case about the controversial and inflammatory New York Times opinion article about the use of the Insurrection Act written by Arkansas Senator Tom Cotton. To prepare for the case, the team read into the article’s contents as well as how New York Times employees responded to it.

“In looking at the ethics, we considered multiple theories, but we ultimately landed on public discourse ethics to use for our argument. We answered the other team’s and the judges’ questions very well, and it all came together,” Owens said. “Overall, I’m incredibly proud of how we performed at nationals. It was definitely a difficult weekend, but we all relied on each other to get through and succeed in the end.”

To prepare for the event, students returned from winter break early for “ethics camp,” where they spent several hours each day talking through the cases and discussing areas that needed further research. After that, they did two weekly practice sessions and more research outside of practice, said Dr. Laura Kicklighter, Ethics Bowl coach and assistant director of the Westover Honors College.

The students were provided approximately 17 cases before the event to prepare. Cases ranged in topics from Title IX proceedings for sexual misconduct to the historical case of Mary Mallon, also known as “Typhoid Mary.”

“They are amazing students and so intelligent, brave, and dedicated to putting so much time and energy into this activity,” Kicklighter said.