/ News / ‘Honors Scholar of the Year’ keeps promise, excels in and out of classroom

When she was a first-year student at the University of Lynchburg, Ellen Druebbisch ’21 made a promise to herself. “I made a pact … to make the most out of my four years in college and to be as involved as I could be, so that’s what I did,” she said.

Almost four years in, the Westover Honors Fellow and biomedical science major, with minors in biology and health promotion, has more than kept that promise. 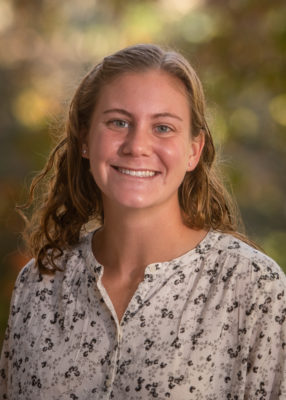 In addition to her academic achievements, which include a 4.0 GPA and a grant-funded senior research project, the Greensboro, North Carolina, resident was a finalist for Lynchburg’s most prestigious academic honor, the Richard Clarke Somerville Scholar.

She’s captain of Lynchburg’s women’s tennis team and was the first student-athlete from that program to receive CoSIDA Division III “Academic All-America” honors.

Druebbisch has served on the Westover Honors College Executive Board and was a peer leader and mentor in the University’s Connections Program, which provides first-year students and their families with information and tools for a successful transition to campus life.

She tutors organic chemistry students through the University’s Peer Assisted Supplemental Study (PASS) program, serves as president and Student Government Association senator for the Student-Athlete Advisory Committee, and was on the Relay For Life committee for two years.

“I have loved my experiences in all the organizations I have been a part of and have made some wonderful connections across campus because of these opportunities,” Druebbisch said. “I have gained confidence in myself, found my passions, and developed my leadership skills, while meeting some really awesome people.

“I hope I have had even half the impact on this campus as it has had on me.”

Dr. Beth Savage, dean of the Westover Honors College, said she doesn’t know how Druebbisch gets it all done. “I asked her to speak to a group of sophomores this year, and she told them that every year she finds one more thing to do, because you can always find more time,” Savage said.

“I don’t know where she finds it, but she obviously makes it work — all while maintaining a 4.0 and working on a thesis with [assistant professor of biology and 2008 Lynchburg graduate] Dr. Jamie Brooks that will likely lead to publication.”

Recently, Druebbisch was named “Honors Scholar of the Year” by the Virginias Collegiate Honors Council, an organization that, according to its website, “joins universities, colleges, and community colleges throughout Virginia and West Virginia to support and enhance programs and activities to meet the needs of exceptionally talented and motivated students.”

She is the first Lynchburg student to receive the honor.

“Ellen has always been an excellent student who kind of flew below the radar,” Savage, who recommended Druebbisch for the award, said. “She’s very humble and unassuming; she never seeks the limelight. But when you talk to her, you see this strong will and amazing intellect and confidence. And, of course, what she’s done on campus is pretty outstanding as well.”

Druebbisch said she was drawn to the Westover Honors College by the opportunities it affords students at Lynchburg. “I was really interested in the types of courses they offer … and how they give you a broader view of the world around you,” she said.

“Coming in as a freshman, I was also really drawn to the community that surrounds Westover and thought it would be a great way to make friends right away and allow me to take classes with people who have the same academic drive that I do.”

She added that she enjoys the colloquia, interdisciplinary courses designed expressly for Westover Honors Fellows. The spring Honors Colloquia lineup, for example, includes everything from the Politics of Sports to Plagues and History, all taught by a select group of Lynchburg faculty.

“I have also had the opportunity to do research the last couple of years, which has been a very rewarding experience and something that many undergraduates do not get the chance to do,” Druebbisch said. “Overall, I am thankful to be in Westover because, as a science major, I was able to take classes I typically would not have chosen, but really learned a lot in and truly enjoyed.”

As “Honors Scholar of the Year,” Druebbisch will speak at the VCHC Spring Conference, which will be held virtually on April 10. In the fall, she will enter the Master of Public Health/Registered Dietitian combined program at the UNC Gillings School of Global Public Health. Her goal is to work in public health and nutrition counseling in schools and with underserved populations.

Savage said Druebbisch’s selection as “Honors Scholar of the Year” only “reinforces what I say all the time: I would put our top students up against students from any other school. Our students make their own paths and choose their own successes because they put in the work. They truly never cease to amaze me.”