/ News / New podcast looks at how Hollywood interprets the past

As a Generation Xer growing up in the 1980s, Dr. Brian Crim watched lots of TV. At the same time, he also fell in love with books and history. Over the years, the author and self-described “news junkie” said he started to notice how some of his favorite TV shows were influenced by historical events.

“The more I learned about history, which of course became my career, the more I realized how much pop culture acted as the primary medium for interpreting the past for the public,” Crim, a professor of history at the University of Lynchburg, said. “Culture reflects our contemporary fears, hopes, obsessions, and values.”

“M*A*S*H,” a popular dramedy of the 1970s and early 80s, is one example of this. “[It] was a show supposedly depicting a medical unit during the Korean War, but everyone could tell it was really a commentary about the Vietnam War,” Crim said. “The creators used one historical event to comment on the present, or recent past, to safely channel that angst. 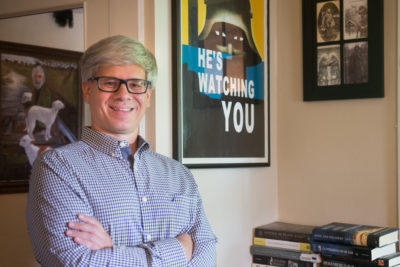 “I started to see the power of the medium, and fear it at times because of how easy it is to misrepresent facts in pursuit of entertainment. Part of my job as a historian is to teach my students to discern fact from fiction, both in the news and in their entertainment.”

In December, Crim and graduate school classmate Lia Paradis, a history professor at Slippery Rock University, launched “Lies Agreed Upon,” a podcast that examines how Hollywood interprets the past.

The podcast takes its name from a famous Napoleon Bonaparte quote: “History is a set of lies agreed upon.” The French military and political leader was “very aware of his own legend and how societies create myths to reflect what they want to believe about themselves,” Crim said.

Season One of the podcast, available for download on numerous platforms, including Apple, Spotify, Stitcher, Google, Amazon, and others, looks at how the 9/11 terrorist attacks influenced TV and film.

Over seven episodes, the hosts talk about how movies as diverse as “300,” set in 480 B.C. Greece, and “Twelve Years a Slave,” set in antebellum America, were heavily influenced by the events of 9/11.

“Filmmakers are artists and when they engage historical topics they are commenting on their present,” Crim said. “They may consult historians to get costumes right, or chronology of events, but in the end the filmmaker’s choices are grounded in expressing a contemporary perspective. Our podcast breaks down what they get right and wrong and why.”

While he and Paradis both have PhDs in history and have taught at the college level for decades, Crim said the podcast is aimed at most everyone. “We designed this podcast to appeal to the educated public, film buffs who are interested in history,” he said.

Season Two is expected to look at how revolts and revolutions are portrayed in film, using “The Patriot,” “The Battle of Algiers,” “Mandela: Long Walk to Freedom,” and other films as examples. “It takes a long time to script episodes and we both have full semesters, so I expect Season Two to be out in the summer,” Crim said.

So far, response to the podcast has been “above and beyond what we expected,” Crim said, adding that it’s been downloaded by people all over the world and has caught the attention of some famous folks as well.

“We tag directors and writers associated with the films we cover, so Oliver Stone actually liked a tweet promoting the episode featuring [the 2006 film] ‘World Trade Center,’” Crim said. “Lia also got into a conversation with the great German director Werner Herzog.

“We also got a response from film critic Peter Bradshaw, who writes for The Guardian. Our reviews are also universally positive.”