University of Lynchburg graduate Tarsha Joyner ’13 and her downtown bakery, Mrs. Joy’s Absolutely Fabulous Treats, will again be featured on national television — this time in Canada. Food Network Canada will air the premiere of “Project Bakeover” at 9 p.m. EST on Thursday, Feb. 4.

Joyner announced the happy news on her Instagram page Monday by sharing a promo video: “Mrs. Joy’s is about to go international, y’all!” 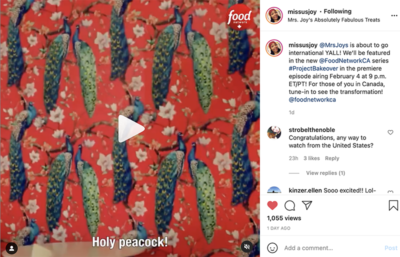 If you’ve stopped in Joyner’s Lynchburg store lately, you may have noticed the colorful peacock wallpaper, as well as some other new design features. It’s all part of the TV show, and it’s not Joyner’s first. In 2015, she won the Food Network Christmas Cookie Challenge along with $10,000 to help start her own business, which she did the following year.

She soon returned to battle bakers in the network’s “Dessert Games” in 2017 and, in 2019, Joyner competed in Food Network’s “Haunted Gingerbread Showdown.”

The difference this time will be that everyone got involved, she told ABC 13-WSET on Tuesday, including her family and her employees. And once again, a television show may have made the difference in the life of her small business. Before the show, she told the news channel, she’d thought about quitting.

It’s hard to imagine downtown Lynchburg without the bubbly baker and her colorful concoctions — and hard to believe this is still fairly new territory for Joyner.

Last May, she told Lynchburg Living magazine that before Mrs. Joy’s, she used to be a terrible baker.

“The cookies I made for my kids when they were little were a joke,” Joyner said. “It was like a Christmas tradition to see how screwed up the cookies would be that year.”

A project in one of her graphic design classes at Lynchburg inspired the then-art major and mother to start her own business — as a baker. In her senior year, Joyner designed a brand for an imaginary baking company. With the help of YouTube tutorials, she turned it into a real business. 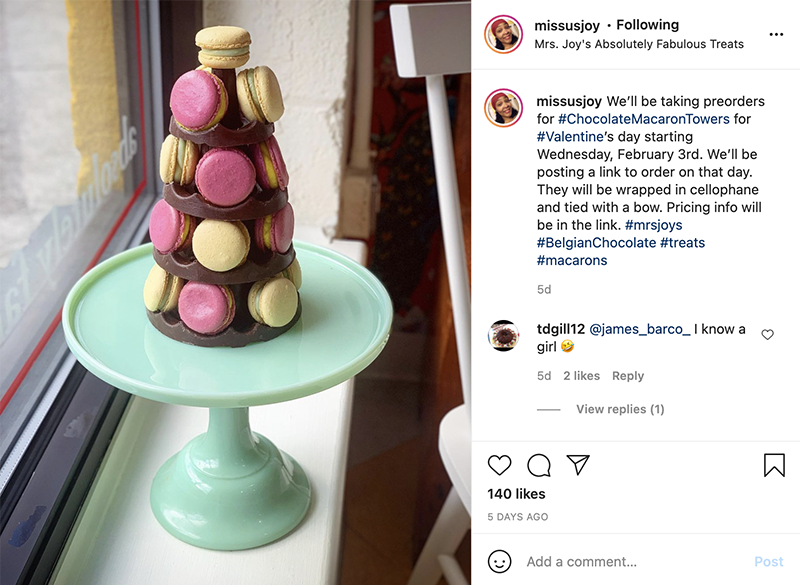 At first, she was baking cookies in her kitchen and selling them at the Lynchburg Community Market on Saturdays. Today, she’s making and selling an array of treats at her store on Commerce Street — and it’s not just her anymore. She’s employing a team of six now, including two of her daughters.

You can follow Joyner’s latest recipes and updates on social media. Since last month, Mrs. Joy’s can also be found on TikTok.