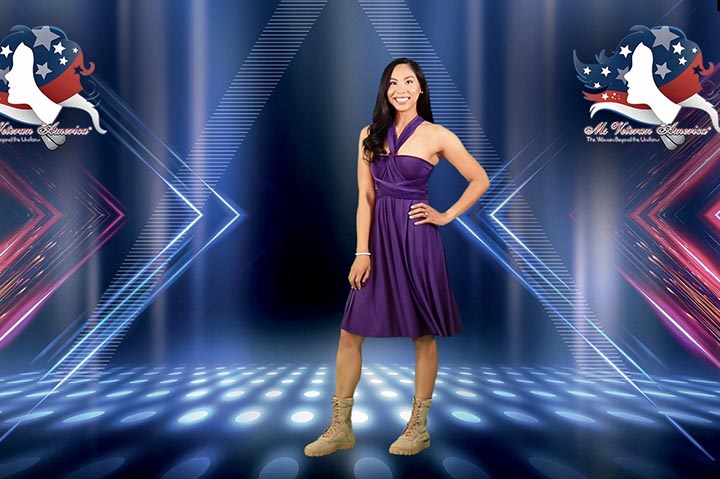 Liza Gainey ’20 DMSc was inspired to start volunteering in her community during her coursework for the Doctor of Medical Science at the University of Lynchburg. In particular, she credits her classes in global health and disaster medicine with providing that spark.

“[It] reignited that passion to help others and to do something for the greater cause,” Gainey, a physician assistant in Colorado Springs, said. “Doing a humanitarian mission is on my bucket list, but I want to wait until my kids are older.

“[This] led me to look for ways to help out in my community, in particular [with] the veteran population. Then, I was shocked to find out how many homeless women veterans there are and how they are unaccounted for and the ‘invisible homeless.’” 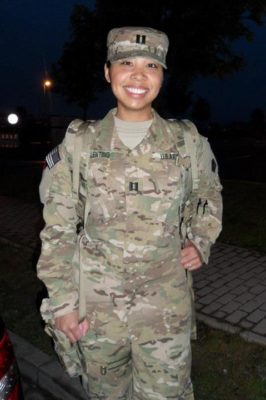 As a woman, mother of two small children, and U.S. Army veteran, this cause touched Gainey’s heart and eventually led her to compete in Ms. Veteran America. The annual competition, held virtually on Oct. 11, benefits Final Salute Inc., a nonprofit that helps find suitable, safe housing for homeless women veterans and their children. Final Salute estimates there are 55,000 homeless women vets in the U.S.

“I felt that it was a great way to continue my service to my sisters in arms and to be a role model for my children and others,” Gainey said. “Another reason I did [it] is that it’s far from being a pageant. It showcases the woman beyond the uniform. There is no age limit, height, or weight requirement, and we are all advocating for the same goal, which is to spread awareness about our growing homeless women veteran population.”

Gainey served in the Army from 2004 to 2015, first as a nurse and later as a PA. She was stationed in Korea, Germany, Hawaii, Texas, Colorado, and Washington, and did an 11-month tour in Afghanistan. She currently works in physical medicine and rehabilitation at Spine and Joint Solutions in Colorado Springs, where her husband Joe, an Army officer, is stationed.

Gainey, one of 25 Ms. Veteran America finalists, raised $6,000 for Final Salute and supported the goals of the nonprofit in other ways, too. “It only costs $25 a day to provide transitional housing, food, counseling, onsite case management, child care, and other essential services,” she said.

“I spoke at a local veterans’ center. I was in the local papers, news, and radio, and I did two podcasts to help spread awareness. I also kicked off the Military Powerhouse PA Summit with the Society of Army PAs, which I was honored and proud to do because it was right before National PA Week and the competition.”

Ms. Veteran America, which is open to active duty military and veterans, includes the sorts of things one expects from a traditional “beauty pageant” — ball gowns, talent, interviews — along with some unexpected aspects, like a push-up competition. Contestants ultimately are ranked in four areas: interview, talent, military history, and advocacy.

For the talent portion, all contestants lip-synced a song. Gainey chose Mariah Carey’s “Hero,” which she also interpreted with American Sign Language. “I chose ‘Hero’ … because I thought it was fitting during the pandemic, being a health care provider, for all the essential workers,” she said. “Of course, the military will always be heroes.”

By the time the competition was over, Gainey had placed in the top 10 in the talent and overall categories, and her resolve to keep working on behalf of homeless women vets had only increased. “I plan to continue advocating and spreading awareness about Final Salute Inc., so our women veterans who may be homeless or hurting financially know there are resources out there,” she said.