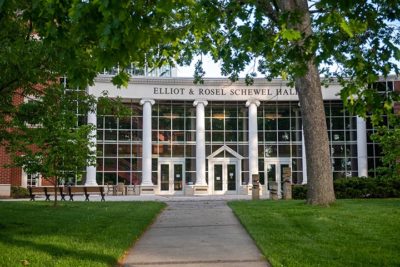 The CFA online tournament still included three general categories of speech and debate, plus options for several events in each category.

One of the Lynchburg team captains, Madison Pietctrazak ’20, won fourth place in Prose and shared the fifth-place award in Duo Dramatic Interpretation with Rhiannon Cire ’21. She also shared first place in Parliamentary Debate with James Cardenas ’22.

Pietctrazak, a communication studies major and theatre minor from Townsend, Delaware, said her favorite part was seeing all her friends from other schools and being able to continue competing — despite pandemic restrictions.

“It was still so much fun! I am so proud of how our team performed, especially members who were new to this competition,” she said.

Weeks, a biology major and German minor from Milwaukee, Wisconsin, also picked up fourth place in Poetry and shared third place in the Parliamentary Debate (team) with Cire.

The Lynchburg team as a whole attained fourth place in the Sweepstakes category, which team coach Dr. Paula Youra, professor of communication studies and director of the Center for Professional Communication, attributed to hours of preparation.

“Their success was due to constant practice. Think of it like an athletic team, we practice as hard as any other athletic team. When they are going to a game, they work to make sure they are prepared for any scenario. Just like a traveling athletic team, we are essentially competing with our minds more than anything else,” Youra said.

The award is especially important since the nine-member Lynchburg team is competing against larger teams like Randolph-Macon College or Bloomsburg University, which have up to 30 people on their teams.

Their next competition will be another online tournament on Nov. 6.