/ News / First-gen college student making the most of Lynchburg experience

Emmanuel Hernandez Mellado ’23 hit the ground running when he arrived at the University of Lynchburg for the Fall 2019 semester. The first in his family to attend college, the Winston-Salem, North Carolina, resident wasted no time getting involved on campus.

Over the past academic year, Hernandez Mellado served as the multicultural services senator, which represents the Office of Equity and Inclusion in the Student Government Association. He also served on President Kenneth Garren’s diversity and inclusion task force. 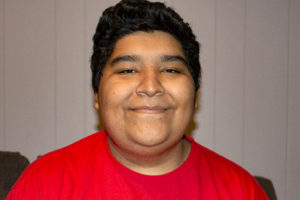 Already, he’s making a difference. “I observed Emmanuel last night during one of his SOAR group meetings with first-year students,” Jessica Gangitano, program and advising coordinator for First-Year Programs, said. “Emmanuel is an outstanding student leader. He always shows up with a can-do attitude and goes above and beyond for not only his students, but for his teammates as well.

“Emmanuel really cares for others and that is reflected in his commitment to our Connection Leader program. I know every student who comes into contact with Emmanuel will leave with a sense of warmth. Emmanuel has already made an impact on this campus and I’m excited to see what else he does in the next three years.”

Dr. Nancy Hubbard, dean of the College of Business, first met Hernandez Mellado in Business: Kill or Cure for Climate Change, a class about managing sustainability that she taught last year as part of the DELL general education curriculum.

“He is an exceptional young man who has found his place at Lynchburg very quickly,” she said. “It isn’t often you see freshmen really making a difference in their first year. Usually, it takes them a while to get their feet under the table. Emmanuel was a force from the beginning, funnily enough not in his original area of study.”

Originally, Hernandez Mellado planned to major in biomedical science. Hubbard’s class, along with discussions with classmates about politics, led him to change his major to political science with a minor in history. His plans are to someday write environmental policy.

If you talk to Hubbard, she’ll tell you Hernandez Mellado is well on his way. “He is an amazing young man,” she said. “He thinks of Lynchburg as his second home now and is incredibly enthusiastic. He will inspire a lot of incoming freshmen.”