/ News / The show must go on: Curtain Call sings on

When classes went online in March, everyone at the University of Lynchburg had to figure out how to carry on while being physically separated. Students in Curtain Call, for instance, usually spend the semester at Dillard Fine Arts Center, where they work on Curtain Up, a spring concert of original songs written in collaboration with New York City songwriters.

The songs that emerge from the Curtain Up Songwriters Workshop have their world premieres at the concert. It’s a big deal for everyone, including the songwriters. Songwriter Rona Siddiqui, for example, once presented a Curtain Up song at the Kennedy Center.

This year, the concert was a no-go, but as they say in show biz, “The show must go on.” So Curtain Call’s directors, Loretta Wittman and Dana Ballard, along with New York City-based composer and songwriters workshop chief James Ballard, did what they do best: They improvised.

“As a group, we are learning to adapt to a new set of circumstances,” Wittman said in early April. “Time never remains still, and there are always new directions and new ways of working in any given field. It’s important for teachers and our students to remain resilient in the face of adversity because it’s at times like these that the world needs art the most.” 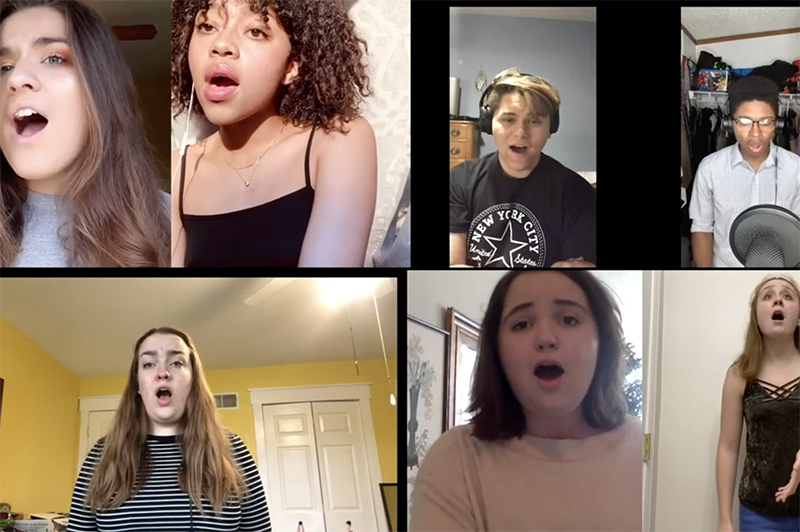 Curtain Call kept meeting, albeit online, and on May 7, its performance of “Into the Unknown,” from the movie “Frozen 2,” debuted on YouTube. Everyone recorded their parts via webcam and Caroline Ballard, daughter of Dana Ballard and host of NPR’s “All Things Considered” in Salt Lake City, mixed and edited the song in the now very familiar “Brady Bunch” style.

“I thought the process would be more challenging at the outset, but putting together the recordings was a piece of cake on our end,” Curtain Call veteran Sloane Kelly ’22 said. “Recording virtually is definitely a different experience, but it’s been fun nonetheless.”

Despite the fact that there wouldn’t be a traditional concert, the songwriters workshop went on as usual. The songwriters — Tia DeShazor, Derrick Byars, Grace McLean, and others — worked with individual students and ensemble groups on new songs. Ballard and Wittman hope to see all the songs performed in the fall, once everyone is back on campus.

“We cannot wait to get back together again to create not only music, but the magic of bringing a performance to life,” Wittman said. “We look forward to working hard and then sharing our work with an audience. We are already looking for ways to incorporate the music of our musical theatre writers throughout the upcoming year.”

Brooklyn-based writer, composer, performer, and music teacher Christiana Cole worked with Kelly on a song that will be in her new musical, “Republicana.” In the play, “Life Under Quarantine” is sung by a 19-year-old faith healer who believes God has inoculated her from COVID-19.

“Republicana” was “born out of a desire to show a small-town Republican in a compassionate, but real way,” Cole said, adding the song, which includes the line, “I will not wash my hands,” was inspired by the pandemic and was a new addition to the play.

During the songwriting process, Kelly, a health promotion major and Westover Fellow, had numerous interactions with Cole. “The first time we spoke, we got together virtually and had a really great conversation,” Kelly said.

“We talked about our backgrounds, family, and really got to know each other. Even though we had never met, the conversation was so effortless and fluent. A few weeks after our initial conversation, Christiana sent me an email with some follow-up questions. Then the writing process began.”

James Ballard worked with writing partner Seth Christenfeld on a Sinatra-esque song for another Curtain Call member. He said the songwriters workshop gives students the rare opportunity to help make a song from scratch.

“I think perhaps the biggest thing the students get out of this workshop is that they get to be directly involved in the creation of a new musical work from the ground up, which is something that virtually no other undergrad program does on a regular basis,” he said.

“This not only gives them a window into the creative process of writers, but also teaches them how to craft a performance that is uniquely their own, since this is the first time any of these songs are being performed.”

Songwriters and others in the entertainment industry also made virtual visits to class. One of these professionals was Dossie McCraw ’91, whom Wittman described as “one of the best theatre students we ever had.”

After graduating with a degree in history, McCraw played Gaston in a Disney World production of “Beauty and the Beast” and Jesus in a European Tour of “Jesus Christ Superstar.” He’s been global head of content partnerships at Spotify and a programming director at HBO. McCraw currently serves as senior advisor at Luminary Media.

“Listening to the songwriters talk about their experiences in the musical theatre scene has been very interesting,” Gillian Trost ’23, a criminology-philosophy major and Westover Fellow, said. “They all have great advice to give us that is applicable to any career field.”

Kelly agreed. “Every single one of them … offered valuable advice for a career in theatre but also [for] life,” she said. “One particular piece of advice that almost every guest speaker has touched on is ‘Be open and willing to try new things; you never know where your hidden talents may lay. Don’t stick with one particular avenue and label yourself as such. Success comes when you’re able to do multiple different things and do them well.’”

In addition to McCraw, the following entertainment professionals dropped by for a virtual visit:

Mike Pettry — New York City composer, lyricist, orchestrator, arranger, and music producer who has written for film, television, video games, and live theatre. He has provided arrangements and orchestrations for the “Documentary Now!” series and “John Mulaney & the Sack Lunch Bunch” on Netflix.

Rona Siddiqui — Inaugural Curtain Up songwriter from Spring 2018, when she wrote “Through My Eyes” for Jenna Bohrer ’21. Siddiqui later had Broadway actress Kenita Miller sing the song during the Kennedy Center performance of “Rona Siddiqui: Halfghan on a Mission.” Siddiqui is a Jonathan Larson Grant winner.

Caroline Ballard — Central Virginia native, graduate of the Columbia Journalism School, and public radio host, producer, and sound engineer. In 2016, her reporting project “Women Run the West,” which examined the representation of women in western politics, was selected to be a part of the first NPR Story Lab.