This summer, University of Lynchburg graduate student and veteran John “J.R.” Wise ’16 will add another award to his long list of academic and military honors, which include two Army Achievement Medals and an Army Commendation Medal, among numerous others. He’s receiving the NATA Foundation’s Jeff Snedecker Memorial Scholarship, an award sponsored by the National Basketball Athletic Trainers’ Association. 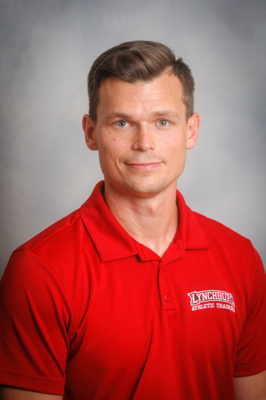 In his winning essay, Wise argued that his experience as an active-duty U.S. Marine and member of the Virginia Army National Guard puts him in a unique position to understand how athletic trainers can benefit tactical professions.

“During my 12 years in the military, I performed a variety of jobs and went overseas seven times,” Wise wrote. “I know where the military health care system is lacking.”

Wise said he suffered “numerous small injuries and two major injuries” during his military career, including a blast-induced concussion that was missed by military doctors, and two herniated discs. Had an athletic trainer been present, Wise argued, the herniated disks, and many other injuries in his unit, may have been prevented.

“The military has been making great strides with physical fitness and injury prevention by incorporating athletic trainers in recent years, though I wonder how many have a tactical background,” Wise wrote further. “I believe that my experience and understanding of the day-to-day life of a tactical athlete would allow me to be quite effective at providing athletic training services in this setting.”

Wise tested that claim when he worked on strength and conditioning with firefighters at the Lynchburg Fire Academy earlier this spring. He hopes to return there after the coronavirus pandemic, which has shifted academy resources and put his training on hold. Last summer and fall, he helped E.C. Glass High School, treating and preventing injuries among its student-athletes. His most meaningful experience, however, happened during a clinical rotation at Georgia Pacific in Big Island, Virginia, late last fall. 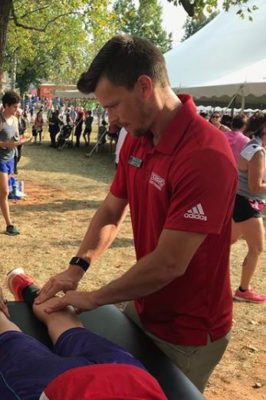 “This athletic trainer has shown me how effective an athletic trainer can be at preventing injury in any setting. I believe he also has proven his value to Georgia Pacific several times over.”

But it wasn’t just the numbers that added up for Wise.

“The athletic trainer at the paper mill exemplifies everything I think an athletic trainer should be,” Wise said. “He is patient, compassionate, intelligent, and genuinely cares for those around him. I strive to emulate these qualities.”

The experience at Georgia Pacific reinforced for Wise that he wants to work in a nontraditional setting. “I really like the idea of helping to prevent and treat injury, as well as promote health and wellness, in a population whose livelihood, and possibly lives, depend on their ability to move properly, safely, and pain-free,” he wrote.

Besides, athletic trainers have already established their value in sports, Wise added, but they have a lot to offer non-athletes.

“Athletic trainers are what the military refers to as force multipliers: For a relatively small investment, a massive return on that investment is produced,” he said. “They are well-suited to work in tactical and occupational settings where they can reduce injury and promote health and wellness.”

A big believer in data to prove his worth, Wise is busy practicing his research skills in Lynchburg’s MSAT program. He’s currently working on a study titled “External Load and Impact Differences Between Positions in Collegiate Lacrosse Athletes.”

Whether his next step’s a doctorate or a job, Wise says the MSAT is giving him a solid foundation.

“My experience with the MSAT program has been overwhelmingly positive,” he said. “I went to Lynchburg College for my undergraduate studies and chose to come back because of the awesome athletic training faculty. Academically, the professors hold students to high standards and provide the tools needed to reach those standards.

“I have felt challenged and supported every step of the way so far, and I expect that to be the case all the way to graduation.”