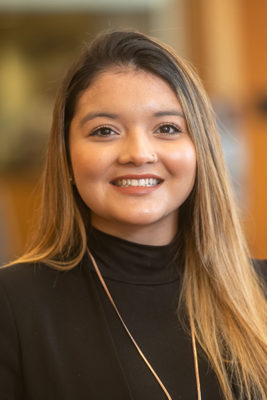 Kimberly Mendez Lemús arrived at the University of Lynchburg (almost) by chance — and she’s been grateful for the happy accident ever since. After a friend convinced her to come along on a campus visit, Mendez Lemús fell in love. She decided to apply, was admitted, and joined the University as a fellow Hornet.

“The person I was four years ago as a freshman has become a person that seeks to constantly better not only myself, but the people and the world around me, and that is all thanks to the University of Lynchburg,” she said.

During a virtual ceremony tonight, Mendez Lemús received one of the highest honors for undergraduate students: the Robert L. Hill Distinguished Senior Award. The Hill Award was established in 1989 by Dr. Ann R. Hill in memory of her husband, Dr. Robert Hill, a professor of economics at Lynchburg and chair of the Department of Economics.

Before joining the University faculty, Hill worked at the Federal Reserve in Washington, D.C. He was a strong advocate of academic excellence, particularly as expressed in a well-rounded liberal arts education, and the Hill Award exemplifies that perspective. The award is given each year to a graduating senior who ranks in the top 2% of the class, has pursued a challenging and rigorous academic curriculum, and has exhibited involvement in campus and/or community life.

Mendez Lemús says she was thrilled to receive the award, and humbled by the other finalists.

“They are some of the brightest, kindest, and most wonderful human beings I have met, and it has truly been a humbling experience to be among them,” she said. “I am so grateful to see how far we have all come.” 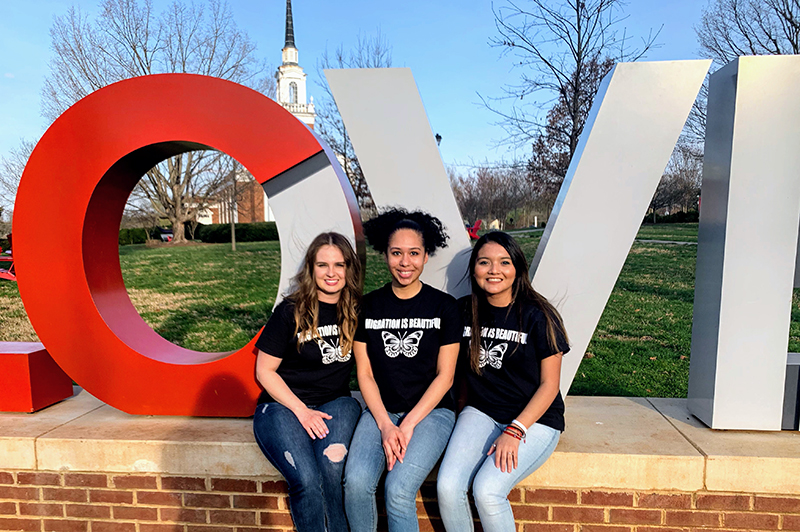 Mendez Lemús arrived on campus a shy and quiet student. She never imagined that part of becoming herself at the University of Lynchburg would involve being loud, argumentative, and obnoxious — even berating other students. Yet her experience in the European Union simulation forced her to do just that. Dr. Marek Payerhin, professor of political science, pushed her to fulfill a role that was the opposite of her reserved personality, asking her to represent a far-right UK political party known for its disruptiveness and offensiveness.

Mendez Lemús was sure, she said, that she would fail, but quickly found that playing such an extreme role could help her find and assert her own voice. “I became more comfortable in my abilities, knowing that I was fully prepared with the knowledge and facts needed, making my voice heard, standing [up] for what I believe in, and negotiating with others to reach a consensus,” she said.

Mendez Lemús went on to participate in the European Union simulation three times and, in the spring semester of her senior year, was selected by Dr. Sabita Manian, associate dean of the Lynchburg College of Arts and Sciences and professor of international relations and political science, as a head delegate for the Iceland delegation at the National Model United Nations Simulation. 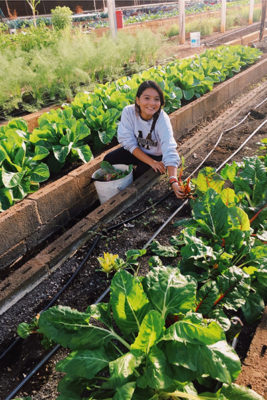 The delegation went on to win four Outstanding Position Paper Awards under Mendez Lemús’s leadership. Mendez Lemús credits Payerhin and Manian with maintaining rigorous expectations in their classes to push students to reach their highest potential.

Manian agrees that Mendez Lemús has found a powerful voice on campus. “She is confident and assertive without being arrogant and dismissive; she is thoughtful, deliberative and mature in her observations,” she said.

The daughter of Guatemalan immigrants, Mendez Lemús has a particular interest in studying the “global south” and Latin America. Her double major in international relations and Spanish allows her to fulfill her personal passion of helping “those around the world who are most vulnerable and most in need.”

Though Mendez Lemús is fluent in Spanish, her drive to improve led her to add a Spanish major and take all the 300-level courses she could. On a study abroad trip to Oaxaca, Mexico, she even took an independent study course with a Mexican professor in which she was the only student. Her major, she said, “not only strengthened my pride in being of Latino descent,” it also fueled her “desire to one day help a region of the world that is a part of my own culture and personal identity.”

Hoping to further this commitment, Mendez Lemús applied to the Peace Corps and was recently accepted as an English co-teacher in North Macedonia.

Mendez Lemús has made an impact on Lynchburg’s campus and community not only through outstanding academics, but through her work with the phonathon for the University’s Annual Fund, as a tutor in the Wilmer Writing Center, as president of the National Society of Leadership and Success, and as a volunteer with Lynchburg Grows. 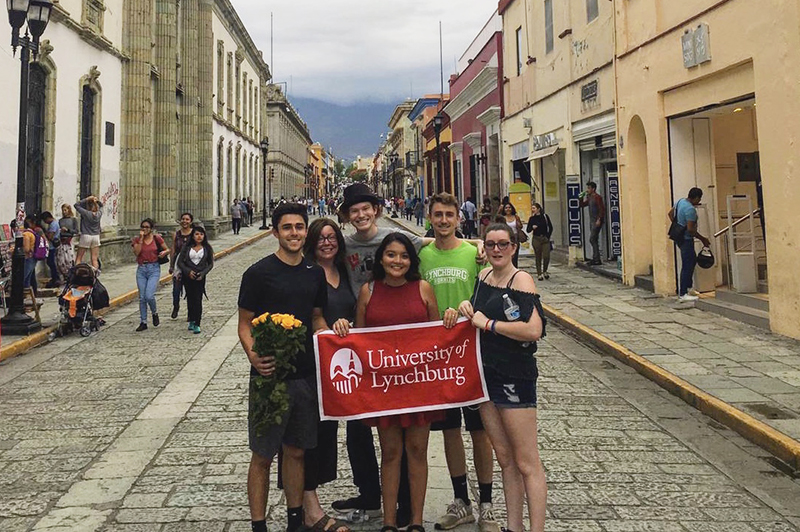 Manian said Mendez Lemús has “exhibited extraordinary academic acumen” and “stands out among her peers because she marches to a different drum … she truly is a role model.”

Mendez Lemús is grateful for the foundation provided by her education. “The University of Lynchburg is truly like no other,” she said. “I have had the opportunity to create special bonds with professors and friends who will always hold a special place in my heart. I have had the opportunity to gain an education that never limited me, allowing me to fully embrace all my interests, and to participate in some of the most amazing experiences.

“Lynchburg means so much to me. I would not be where I am without all of the lessons I learned here. Thank you, Lynchburg, for being one of the most special places in the world, and for being home to our Class of 2020.”

Mendez Lemús was especially proud to share the news of the award with her parents, whom she looks up to as “a literal representation of the American Dream.” 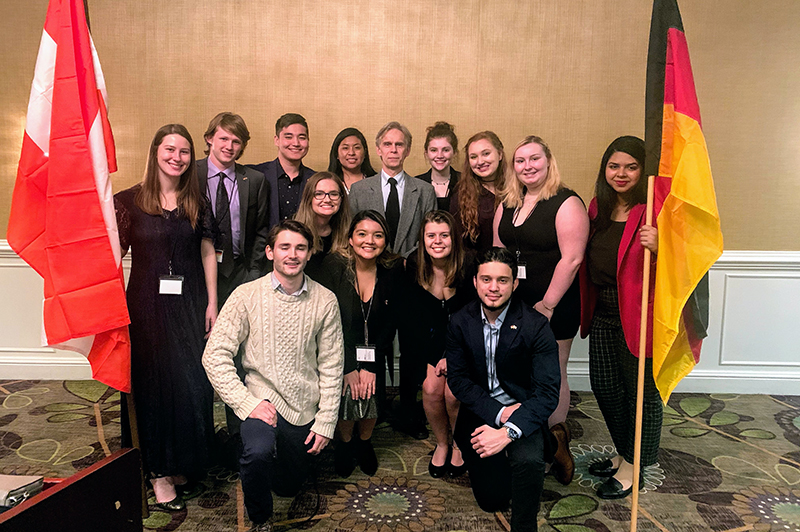 Mendez Lemús said, “Nothing matters to me more than to honor my parents’ sacrifices and to make them proud. Hearing my mom say that she and my dad are thankful to God that all of the sacrifices we have made are worth it all and that they are proud means everything to me.

“It’s hard to put into words what it means to be a first-generation college student of direct immigrant descent. The pressure and expectations that come with it are grueling, to say the least. … The Hill Award is so much more than an award for me, it is a symbol of honoring my parents, something I would not have been able to achieve if it weren’t for the incredible support from my professors, the staff, and friends at the University of Lynchburg.”

In explaining why Mendez Lemús ultimately took the award in a field of extraordinary finalists, Hill Committee member Dr. Paul McClure, assistant professor of sociology, said, “There’s a great myth circulating which supposes that students who invest in a liberal arts education foolishly waste their time and money. Then comes along a student like Kimberly, who shatters that myth to pieces. From the first day she walked on campus, Kimberly immersed herself in international relations, Spanish, philosophy, economics, and religious studies.

“Now, just four years later, she has debated European politics in front of hundreds of her peers, taught English to children in Mexico, managed contracts for her parents’ company, raised money for the University, and helped fellow undergraduates improve their writing. A charitable, thoughtful, and passionate student, Kimberly has positioned herself for success well beyond Lynchburg and for years to come.”

McClure added, “The liberal arts naysayers should take note. Kimberly will prove them all wrong.”