The University of Lynchburg has announced a new, interdisciplinary program. Starting in Fall 2020, students can major in Africana studies. Lynchburg is the only school in the Tri-College Consortium and in the greater Lynchburg area to offer the major.

Africana studies requires just 33 credits — an intentional decision to make it easy for interested students to double-major, said Dr. Ghislaine Lewis, co-chair of the program and an assistant professor of communication studies.

“We live in an increasingly interconnected society where respect for diversity and inclusion are paramount,” she added. “We hope that the addition of this major will allow students to have opportunities to consciously learn about multicultural experiences.”

Students in the program will explore race-related questions and study the lives of Africans and people in the African diaspora. Africana studies combines a core intro class and a capstone project with existing courses from a variety of disciplines, including history, English, sociology, psychology, and music.

From Slavery and Race in the Early Americas to Modern Multicultural Literature to Jazz and the Origins of Rock Music, students are challenged to look at African history from multiple angles. In addition, they can complete an internship or study abroad in South Africa or Uganda.

The capstone project, which happens during the final year, requires students to partner with a local organization in collaboration with the University’s Center for Community Development and Social Justice. Dr. Lindsay Michie, associate professor of history and co-chair of Africana studies, said the goal was to strengthen connections with the community in Lynchburg. 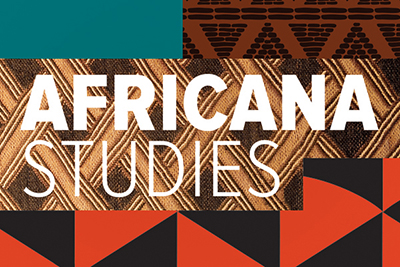 “With the capstone course acting as an internship, and with community service assignments embedded in several of the courses in the program, this major is intentionally designed to act as a bridge between the University and the Lynchburg community,” Michie said.

“Students can, therefore, as they are taking courses, start to apply the principles of diversity and knowledge of African heritage culture to their experiences in organizations and programs, and through interacting with community members in the City of Lynchburg and surrounding areas.”

Unlike many other majors, Africana studies is student-driven. The new major “answers some concerns that were raised in previous town hall meetings about diversity in the curriculum,” Michie told the Critograph, Lynchburg’s student newspaper.

Creating a new major — initially envisioned as a minor — seemed like a good response, Michie said.

To gauge interest in an Africana studies major, Michie and Lewis surveyed the student body — starting with the Black Student Association last spring. Over the summer, Student Government Association President Davion Washington ’21 sent the questionnaire to all students.

The feedback was overwhelmingly positive.

“Sixty-seven percent of students who responded said they were interested in taking the major …, and a number of those who responded commented that, even though they may not be able to join the major, they still felt it was important to have it as part of the curriculum,” Michie said.

Africana studies is part of the general studies department. Department dean and associate provost at Lynchburg, Dr. Chip Walton, thinks it’s a valuable addition to the curriculum — and not just for majors.

“The interdisciplinary nature of Africana studies makes it a good fit for general studies,” Walton said. “Africana studies will also promote the values associated with a liberal arts education and prepare students to successfully navigate an increasingly complex world.”

What’s more, the major “is uniquely positioned to highlight the ways in which the social construction of race has shaped contemporary society,” Walton added.

He also expects Africana studies majors to enrich classes across the University’s curriculum with their diverse perspectives. “I think the entire institution stands to benefit from the Africana studies major in as much as it is poised to bolster our collective cultural literacy,” he said.

For more information about the major, email Lewis at lewis_g@lynchburg.edu.