Dr. Kenneth Garren, president of the University of Lynchburg, was honored by the Lynchburg Regional Business Alliance with the 2019 F.M. “Dink” Cloyd Memorial Award for volunteer service. Garren accepted the award during the Alliance’s annual meeting last Wednesday.

During his two decades at Lynchburg, Garren spent many years supporting the Alliance, formerly the Lynchburg Regional Chamber of Commerce, in various roles. He is a member of its Government Relations Committee and served on its board from 2002-2007, and again from 2009-2014. One of his tasks has been taking local issues to the General Assembly in Richmond — and frequently to Washington, D.C.

“His energy and enthusiasm helped lobby in D.C. for private colleges and universities, and he went abroad to strengthen educational partnerships,” reads a statement from the Alliance in this year’s annual meeting program. Garren, it continues, also played a part in the Alliance’s accreditation, helping to secure a five-star rating — the highest accreditation possible for regional chambers.

In a letter, U.S. Senator Mark Warner congratulated Garren on his “exemplary service to the Lynchburg community,” adding: “Leaders like you inspire excellence in others and help the Commonwealth thrive. …I know your efforts will continue to encourage others to exhibit the same leadership qualities that have enabled you to make a positive impact in the region.” 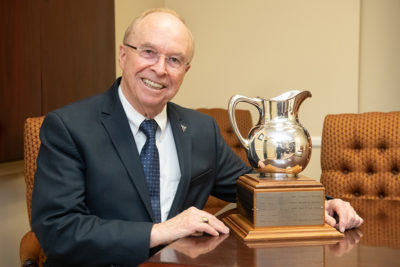 For Garren, it all comes down to one thing. “It’s nice to know that they felt that I helped them do their job,” he said. “That’s the bottom line for me, that’s what was important to me.”

Being of service whenever he was needed, and helping former chamber president Christine Kennedy “do the things that she was trying to get done,” he added, “felt really good … I’ve just enjoyed so much working with the chamber. It’s been one of the most important groups in the city, in terms of helping the economy.”

Not surprisingly, Garren has been honored by the Alliance before. In 2012, he received the George Taylor Stewart III Award.