Due to the University’s ongoing efforts to stem the spread of COVID-19 (coronavirus), this event has been canceled.

The University of Lynchburg, specifically its gender studies program and the offices of Equity and Inclusion, Student Engagement and Leadership Development, and Housing and Residence Life, will present two events based on the book “The Lavender Scare: The Cold War Persecution of Gays and Lesbians in the Federal Government.”

The 2004 book, by University of South Florida history professor Dr. David K. Johnson, deals with the purging of gay workers from government jobs in the 1950s. 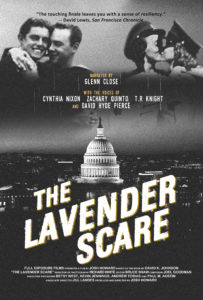 Both events are free and open to the public.

On Monday, March 16, the documentary “The Lavender Scare” will be screened at 7 p.m. in Hall Campus Center’s Memorial Ballroom. The award-winning film, produced by Josh Howard, will be followed by a Q&A session with Johnson.

On Tuesday, March 17, Johnson will present the University’s annual Gender Studies Lecture, “The Lavender Scare: Homosexuality and Presidential Politics from the Cold War to Pete Buttigieg.” The lecture will be held at 6 p.m. in Memorial Ballroom.

“We are really excited to have Dr. Johnson come talk about his research, both his already-published book on persecution of gay workers in the government and his newer work, which builds on and updates his original research,” Dr. Beth Savage, assistant director of the Westover Honors College, said.

The documentary and lecture are part of a greater “Lavender Week” sponsored by the University. “We are celebrating the artistic, creative, and professional achievements of the LGBTQ+ community, while recognizing what barriers that community has overcome and what barriers remain,” Savage said.

In Memorial Ballroom on March 17, there will be a “Wall of Oppression,” provided by the Spiritual Life Center as a place where students can “reflect on oppression.” From noon to 2 p.m. on March 17 and 18, the Daura Gallery will host “Drawing Out,” described as an “interactive art experience.” The sessions will be held in the Bower Veterans Lounge at Drysdale Student Center.

At 5 p.m. on March 19, the Student Government Association will host a “Blessing of the Rainbow Chairs” on the first-floor patio of Westover Hall. All week long, “Celebrating Lavender: An Exhibit of Texts by LGBTQIA+ Writers,” sponsored by Knight-Capron Library, will be on display in the Dillard Fine Arts Center lobby.