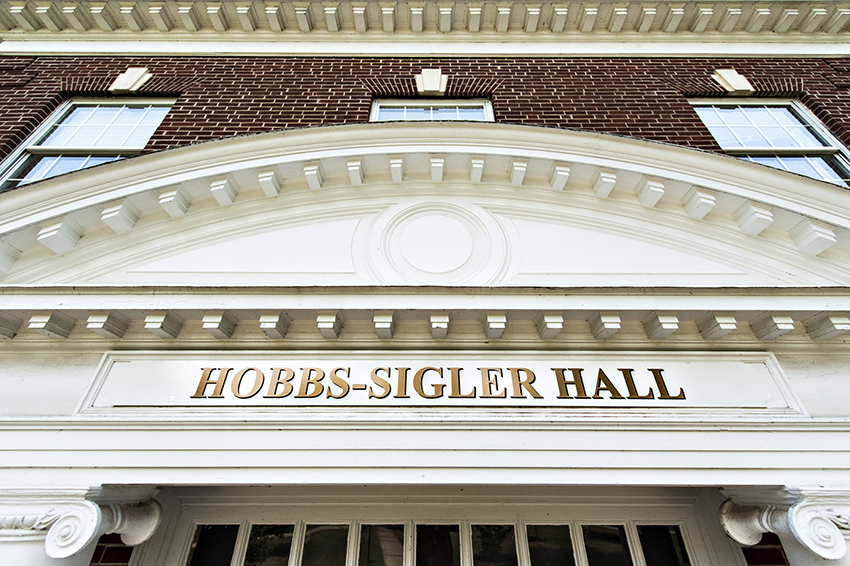 Hobbs-Sigler Hall and the sciences at the University of Lynchburg got a boost late last year when Thomas E. Chandler ’59 donated $100,000. The money will go toward further renovations planned this summer.

In June 2019, the building was upgraded with the state-of-the-art Anatomage Table, among other improvements. This year, the University will focus on HVAC upgrades and roofing, as well as additional classroom and lab renovations.

For Chandler, a Lynchburg native and retired founder of Chandler Concrete in Burlington, North Carolina, it’s all about giving back to an institution that has given so much to him. “[Lynchburg] did a lot for me a long time ago,” Chandler said. “They helped me to straighten up my academic life. I [decided] I need to be giving back.”

Chandler has been a donor for many years, starting with small amounts to the Lynchburg Fund. In 2013, he supported the Drysdale Student Center renovation with $50,000.

But he’s never been too concerned about where exactly his gifts went. He knew that they were in good hands with the University’s advancement office and with Dr. Kenneth Garren, whose nearly 20 years as president will come to a close this summer.

Chandler admits he didn’t keep in touch with Lynchburg for many years. Likewise, he doesn’t recall hearing from his alma mater for decades. He credits the University’s president with bringing him back into the fold more than 40 years after he graduated. Garren, he said, struck up a relationship with him, and he began visiting Chandler in Burlington at least once a year. Chandler was impressed with Garren’s leadership and the progress he was making at Lynchburg. And he enjoyed talking to him.

“I think a lot of Ken Garren and the work that he has done at Lynchburg, so that’s why I give,” Chandler said.

Lynchburg College was Chandler’s second attempt at college. He had left Lynchburg to study elsewhere, but returned soon after. While he’d landed a job in town, he also wanted to continue his education. Lynchburg was perfect — and he wasn’t the only working student at the time. Juggling academics and a job, Chandler started at the Mead Paper Company. Then he got a job in the office of a Cadillac and Chevrolet car dealership, and a third job at Edward’s Men’s Store.

Lynchburg, he said, “took me in.” He connected with other day students and traditional undergraduates through the business club and in between classes while learning bridge in the Student Union, or going to soccer and baseball games.

His studies didn’t really take a front seat until senior year. By then, he was serious. After Chandler graduated in 1959, he enlisted in the U.S. Army for two years and was stationed in Munich, Germany. Once his time in Germany was up, he started a job at Wachovia Bank in High Point, North Carolina, where he stayed for seven years.

A change to the brick and concrete business would pave the way for the rest of his career. While managing a concrete block plant in Burlington, Chandler met a man who was selling his ready-mix concrete business. Chandler bought it and has run it for the past 46 years. In recent years, he’s handed the reins to his sons, and Chandler Concrete now operates 40 plants in North Carolina, Virginia, and Tennessee.

Chandler credits much of his business know-how to the University of Lynchburg. Things he learned during a single business law class have come up throughout his career, he said, as have tidbits from his economics and accounting courses.

“I love business, and so I did better in business courses at Lynchburg than any other things,” he added. “That’s always stayed with me during my career.”

Today, he relishes the opportunity to not just give back to his alma mater, but also pay it forward.

“I just think that we, as people who have gone through and benefited from somebody else’s giving years ago, should do the same thing for those coming after us,” Chandler said. “I like to give and to help enhance the University for future generations.”

Much of that future will be in the hands of President-elect Alison Morrison-Shetlar, whom Chandler knows from her time at Elon University as dean of the Elon College of Arts and Sciences. Chandler is a life trustee at Elon and has supported the institution over the years with his wife, Lynn.

He’s optimistic about Morrison-Shetlar, but knows it won’t be easy to replace Garren.

“She’s got some big shoes to fill in Ken,” he said, “because he’s a hard worker and has done a wonderful job.”